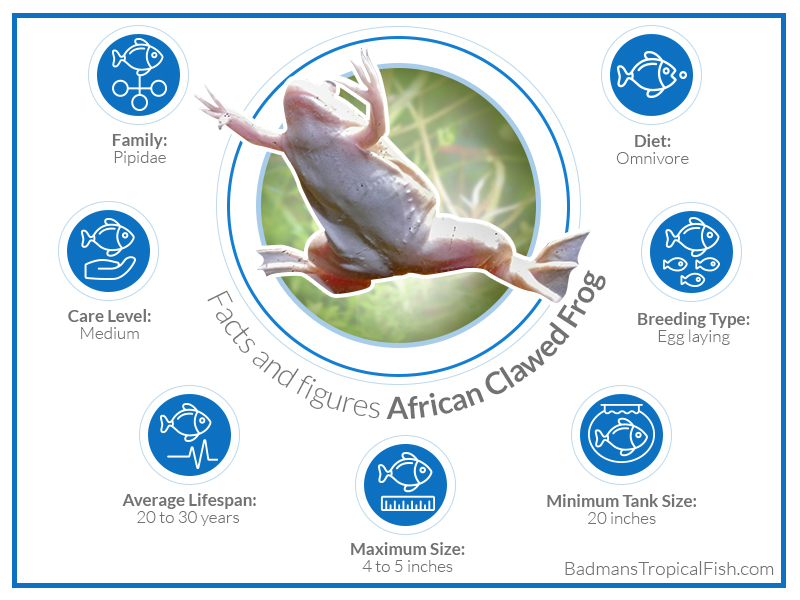 The African Clawed Frog is an aquatic species found in water bodies of Sub-Saharan Africa. The name of this species is based on the presence of claws on their hind feet for tearing food. Because of the ease of care and longer life expectancy, this South African Clawed Frog has become a popular pet among aquarists.

If you have developed a love for aquatic species, you will enjoy this frog in your simple tank setup. However, proper care of this pet requires a clear understanding of the needs and behaviors of these animals in the tank community.

This article is a comprehensive guide about the care of the African Claw Frog, but let us first look at the quick stats about this species.

Facts and Stats About the African Clawed Frog

The African Clawed Frog is inherent to African areas such as Sudan and Nigeria, but these frogs have been found in Europe and South America as well. Since they are completely aquatic, these African Clawed Frogs can be seen in rivers, ponds, and other water bodies in the parts of sub-Saharan Africa. 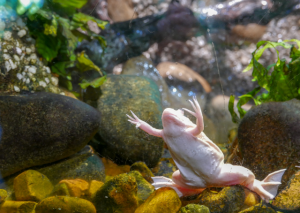 Claws are considered as the highly prominent aspect of this species. This species possesses webbing amid their claws on the hind legs but lacks them on the front side. In pet stores, these are every so often mislabeled and confused as the African Dwarf Frog. Though this species is very similar to them in appearance, there are several trivial differences among them.

Hymenochirus, commonly referred to as African Dwarf Frogs, possesses webbed anterior feet and eyes at the top of heads. On the other hand, the African Clawed Frog carries eyes located at the top part of their heads.

This species continuously searches for food. These frogs look above, ready and waiting for food to fall down. A lateral sensory system spans their body length, providing them the capability to feel any kind of movement. Its system is complemented by the sensitive limbs, making them proficient at positioning various food materials.

Unnecessary shedding of skin can show irritants or pollutants in the water.

African Clawed Frogs in the wild lay down their eggs all through the rainy period, starting from late winter till the spring season. In an aquarium or tank, though, they frequently reproduce instinctively; this is not a situation at all times.

Should you choose to breed your clawed frogs in an aquarium or tank, we have provided some instructions to assist you in making a start. Before diving into it, it is good to know about “sexing” first. When it comes to comparing African Clawed Frog size, the body of female African Clawed Frogs is nearly 20 percent bigger than the male frogs.

Likewise, they are defined as being extra “plump” having fleshy limbs. The African Clawed Frog eggs are transferred through a small bump amid their limbs (It is known as “Cloaca”). Male clawed frogs are smaller in size, having sporting thin limbs and a nuptial pad on forearms having black color after getting mature.

We have mentioned the differences between male frogs and female frogs; we will provide some tips for breeding African Clawed Frogs. Creating a spring season downpour is a secure method to assist your frogs in reproduction.

For simulating spring season rain, the majority of the keepers will decrease the water temperature from 65 to 68 F and let the level of water decrease to some inches. Such an environment is to be maintained for 30 to 45 days.

In the meantime, wash their area by doing partial water changes. Then, following four to six weeks, raise the water temperature ranging from 75 to 80 F and bring an increase in the level of water to a normal level.

It will imitate a spring season flood and ought to persuade reproduction. Experts recommend doing this before darkness. Later, you have to enhance the level of water and temperature, get the illuminations off and let them stay alone. Darkness provides these frogs a feeling of safety, which is continuously an additional advantage.

As soon as the atmosphere is correct, the male frog will make a noise to the female. The noise is best defined as a cricket underneath the surface of the water. Every so often, this sound also comes with dance.

In response, the female member of the species will react with a snapping sound. By utilizing his limbs, the male member will grip just over the rear legs of the female (It is called the “Inguinal Amplexus”) and effectively put pressure on her.

The female’s cloaca will transfer the eggs, and the male frog will fertilize them out of the body. The female frog of this species can leave hundreds of eggs, and this whole activity reaches its ending from two hours to two days.

When breeding is completed, you must get rid of the eggs from the tank. As when African Clawed Frogs get starved, they are recognized for eating their own eggs. Put these eggs in another tank having fresh water with a temperature ranging from 80 to 82 F. The hatching of these eggs will take 48 to 96 hours.

An aquarium of 10 gallons is the smallest suitable size for one African Clawed Frog. These frogs do not require a terrestrial area; the water level should be around 12 inches deep for these frogs to get to the surface area for inhaling oxygen. A safety cover is necessary because this species is proficient in driving themselves outside the water tank and escaping from the tank when getting the chance.

Put average-size gravel on the lowermost part of their tank and get it filled with a minimum of 12 inches of dechlorinated and clean water and use artificial or live plants to decorate the tank.

The most significant area of your frog’s habitat should be clean. Likewise, dechlorinated water is considered appropriate for amphibians. Therefore, it is necessary to eliminate poisonous toxins and chlorine from the water tank before putting your frog in the tank!

The two techniques used for removing chlorine from regular tap water are:

From the items mentioned above, the quickest method is to make use of a de-chlorination agent. Such agents are not expensive and are easily offered at a local pet store or online platforms. This is considered the best method as it can eliminate both chlorine and chloramine from the water.

One more option is filling up the tank through tap water and allowing it to get set for a day. The chlorine gets evaporated, leaving behind clean and dechlorinated water. Though, this selection may not be reliable based on the type of water in your local area.

An aquarium thermometer can be used to ensure that the tank has a temperature around 65 to 75 F. These frogs naturally don’t require different UV lighting. A normal aquarium light can be used to provide lighting.

There are several choices of food for feeding your pet. Tablets used for feeding frogs and tadpoles are easily offered at your local pet store. Other foods include minnows, waxworms, and other feeder fish, earthworms, and bloodworms.

Dog and cat food can also be given to them as feed. Almost every type of organic food material, alive or dead, moving close to the frog will be taken in as food. The feeding amount depends upon the size and age of the frog.

They should be fed daily for almost half an hour. It all depends on the health conditions of the frog. Once they get a full stomach, most often, they will just stop consuming.

Furthermore, like most aquatic frogs growing in captivity, this species faces red-leg disease under certain conditions. It refers to a parasitic infestation, which happens after an initial sign of reddened and swollen legs. You can have it treated by a pet doctor.

The disease is every so often because of the poor quality of water pour in the aquarium. If you are worried about your frog health, avoid treatment at home and refer to a skilled pet doctor for guidance. 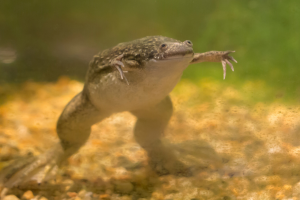 Now that you have all the information about the African Clawed Frogs, you can set up space for this pet in your aquarium or get a frog-only tank separately.

To make it easier, let us summarize the key points from the article for you:

The African Clawed Frog can be distinguished as one of the calmest frogs to have as a pet in the tank. They are considered entirely aquatic, and they can perfectly adjust in a small aquarium. Their diet is easy as they can consume almost everything that the person puts in front of them. They are easily offered in pet stores as well as online. 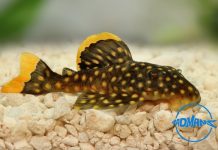 Snowball Pleco: Significance of This Fish 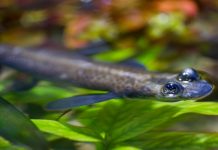 Four-Eyed Anableps: There’s More To Them Than Meets the Eye 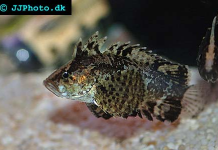 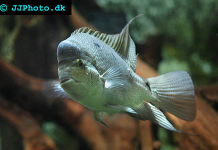