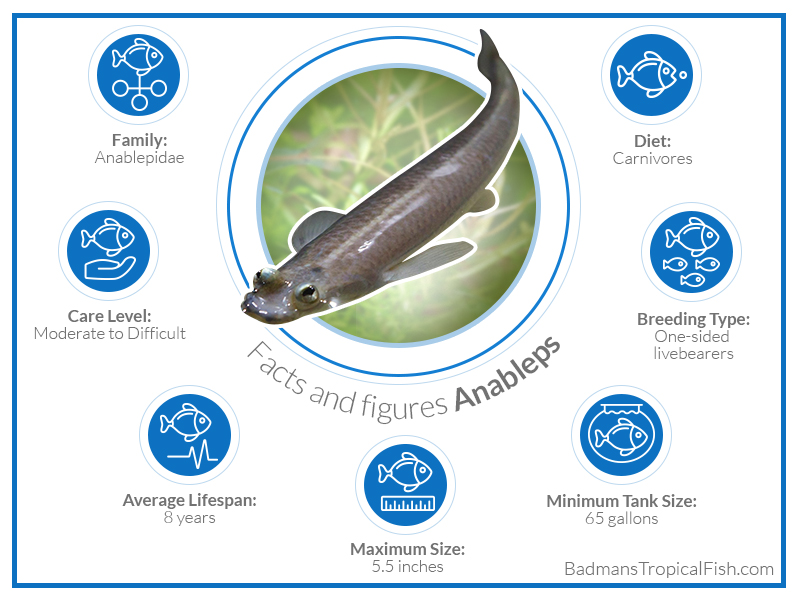 Anableps also known as the four-eyed fish, belong to the Anablepidae family. They go by a variety of different names like stargazer, striped four-eyed fish, and Cuatro-Ojos being the most popularly known ones.

Anableps have a unique aesthetic and boast amusing breeding habits, making them a delight for seasoned fish enthusiasts to keep.

Why Are Anableps Called the Four-Eyed Fish?

Anableps are called the four-eyed fish even though they don’t really have four eyes. Instead, their eyes are divided and split horizontally with a band of tissue, making them appear four instead of two. Anableps take advantage of this feature to see both above and under the water simultaneously, helping them secure food and stay safe from sea predators in the wild.

Quick Stats: Information You Should Know

Anableps are unique species with special features that make it easy for them to adapt to the habitat they live in. Moreover, their adaptation capabilities help seek protection from predators and look for food on and over the surface.

Let’s skim through some quick stats below: 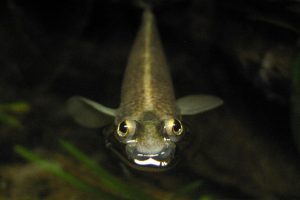 Anableps generally have a cylindrical body in an olive-brown color. The flank and belly of this four-eyed fish are of a light cream color with four parallel dark stripes. These stripes begin behind the large pectoral fins and move towards the sides.

Anablep’s most noticeable feature is its large, bulbous eyes that peel from its tiny head. They are also recognizable by their dorsal fins, which are located at the back of their body to prevent them from moving uncontrollably.

– Habitat: Where Are Anableps Found?

Anableps are tropical fish species that mainly travel alongside brackish waters near mangroves. The fish adjusts its directions according to the tidal movements that change constantly. It lives in the shallow water channels when the tides are low and moves towards the inundated regions searching for food when the water level increases.

The main reason for Anableps to move to marginal zones in low tide periods is to seek cover from predators and to look for food sources. Another attraction for these fish is that low water lets them lay in the sun as low water exposes the mud.

The four-eyed fish were initially found at the coastline of Northeast South America, starting from the Gulf of Paria. They are now known all across Guyana, French Guyana, Suriname, and the Brazilian Amazon Delta.

There are also sightings of them in the coastal areas of Trinidad and Venezuela. Some are reported to thrive near the Paenaiba river that borders the Maranhao and Piaui regions.

How To Take Care of Anableps?

Ideal tank conditions are crucial to taking care of Anableps. The water should be 12 inches deep, and the cover should be tightly fitted as these fish are good jumpers. Without the cover, you run the risk of these fish jumping out of the Aquarium quickly.

To make the home suitable for Anableps, we recommend you layer the bottom of the Aquarium with a 3-inch gravel bed, which can also be combined with bogwood or smooth rocks.

Keeping the Aquarium clean is crucial for the health of these fish. Partial water changes are required with fresh, salty water every two weeks to ensure that the Aquarium is nitrate-free and the water quality is good enough for the fish to survive.

Anableps can be categorized as carnivores. Once they are accustomed to the kind of food offered to them, they readily eat whatever is given. They satiate their hunger by consuming insects like worms or crickets, small fish, crabs, or crustaceans like snails, diatoms, mussels. You should feed them high-protein food items that will aid their development and negate stress.

Anableps scavenge for nutrition, so they do not hesitate to consume a variety of fish flakes, food sticks, dried food, or pellets. Apart from commercial food choices, Anableps thoroughly enjoy live food or frozen food such as daphnia, bloodworms, or brine shrimps.

Anableps are pleasant and peaceful, but they lose their calm and gobble down their tankmates when hungry. They skim through the water to find the perfect prey that would fit into their tiny mouths. Therefore, it is crucial to keep that in mind when introducing Anableps to community tanks.

Schooling fish such as Monosdactylus and Archerfish is the most viable option as tank mates for these four-eyed fish. Given that Anableps demand brackish water, you can consider adding Orange Chromide Cichlids , bright-colored Sailfin Mollies, or Goby fish in the sametank as these fish with 4 eyes.

– Determining the Sex of Your Four-Eyed Fish

One distinguishing feature is that male Anableps have a little sex organ known as the gonopodium, which is pipe-shaped and helps in the breeding process. 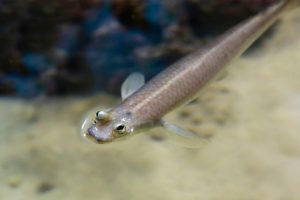 Anableps are popularly known as one-sided livebearers and have sexual genitals either on the left or the right-hand side. To pair with each other for mating, they must find an Anablep of the opposite gender that has sexual genitals at the compatible side.

This makes the breeding process slightly complex but extremely rewarding for fishkeepers to experience.

Anableps usually mate and produce more of their kind in a live environment, without any setup or particular need. Breeding only occurs when Anableps are sexually mature and have healthy male or female partners that are compatible enough to reproduce. Anableps become sexually mature in approximately eight months after they hit six inches in size.

The mating process begins with the male approaching the female Anablep from behind and constantly pushing, resulting in mating stimulation.

Anableps are also known as the livebearers in which these four-eyed fish develop embryos that undergo gestation, which happens inside the female fish. Every developing embryo is nourished according to the principles of the female fish through the embryo’s expanded belly sac.

The surface of the belly sac is covered with delicate veins and blood vessels that easily absorb nutrients and oxygen from the female Anablep’s blood supply. Like humans, the embryos waste metabolites, and the carbon dioxide is carried away through the mother Anableps blood supply.

Gestation is a process that takes up to eight weeks and is dependent upon the temperature of the water. Usually, it results in 10 to 15 large babies approximately two to 2.8 inches and is dropped by the female Anableps.

The fry, also known as the mini copies of the female Anablep, can quickly be eaten by other fish in the Aquarium. But at the same time, if this fry is well fed, they may develop rapidly and become healthy quickly. You should provide the baby fish with bloodworms, fruits, flies, and mini floating pellets.

Anableps are unusually appealing fish to keep. Not only do they have a strange four-eyed aesthetic, but they also boast amusing breeding habits. They may consist of many qualities in other fish species, but they are also distinguishable from the rest because of their color and lifestyle. Here are what makes them different specifically:

If you are interested in purchasing Anableps for your aquarium, consider their unique needs and decide from there. We are sure it will be a rewarding experience! 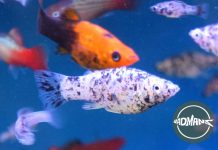 Pregnant Dalmatian Molly: Signs Your Fish Will Give Birth! 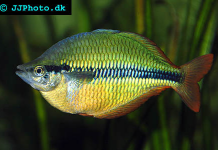 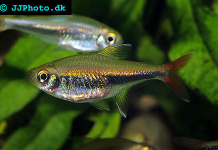