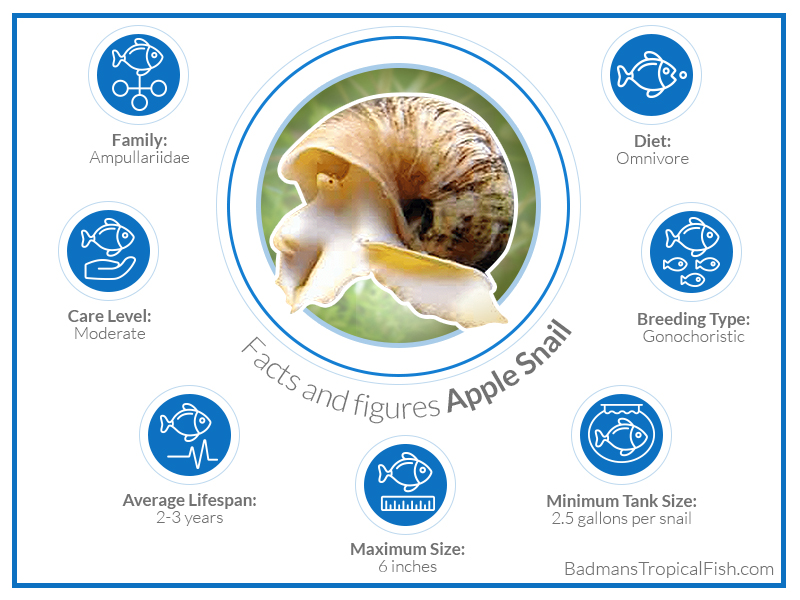 The apple snail is an amphibious, popular freshwater aquarium species because of its attractive appearance and large size. Sometimes called giant apple snails, there is a lot for you to like about them in your community aquarium but there are some things you need to know about owning them.

This article will help you understand everything you need to know to care for, maintain, and breed your apple snails.

The apple snail or Pomacea bridgesii is a South American species native to the Amazon River basin. It is widely found in Bolivia, Brazil, Paraguay, and Peru. It inhabits nearly all bodies of water including rivers, streams, lakes, and ponds.

Amazonian apple snails are the largest of the freshwater snails and can grow up to six inches, about the size of an average apple or tennis ball. The apple snail lifespan is two to three years. 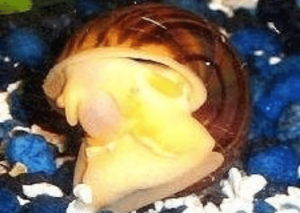 These freshwater apple snails are often sold as golden, ivory, black, or blue mystery snails. There are several color variations including brown, gold, pink, albino, red, chestnut, blue, jade, and even shades of purple and burgundy, sometimes with stripes.

At full growth, their shell has five to six curls or whorls. The overall shape looks similar to an apple, the source for their name. They maintain this symmetry from very early on. The snail can hide completely inside the shell and protect itself with an operculum, which is a shield that it uses to seal itself inside when endangered.

When it roams about feeding, you will notice that it has two tentacles, one by its mouth and one by its eyestalks. The tentacles help in maneuvering food to its mouth, which sits on the underside of its head.

The apple snail has two eyes. One of the unique traits of the species is that if one is damaged or bitten off, the apple snail can grow a new one back. But the most unusual fact is that the apple snail has both a lung and gill so it can live in or out of the water. This lets them live in just about any quality of water as long as it is warm enough to support them.

This ability, which makes them so versatile in aquariums, also makes them a very real threat to non-local environments.

Outside of the aquarium trade, invasive apple snails have become established in Florida, Hawaii, and Louisiana, and California by escaping aquariums or by being released by owners who no longer wanted them. They are currently one of the 100 most invasive species worldwide.

As an invasive species, the apple snail causes concern for many reasons. They grow rapidly and can change water and bottom conditions by their feeding habits. They will eat vegetation and bottom matter. They reproduce so rapidly that colonies of apple snails can ruin water-centric crops such as rice and taro. They are toxic to animals that might eat them and will harbor parasites that are harmful to wildlife and humans, including rat lungworm.

When found in proximity to agriculture or in areas where they are not native, the recommendation is to eliminate all snails you find by any means necessary. If you choose to add them to your aquarium, manage them smartly, remove egg clusters when you find them, and don’t let them escape the tank! 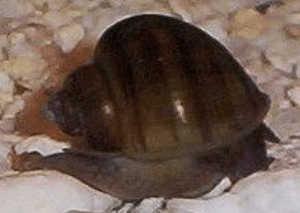 Apple snails are widely accepting of water conditions and will adapt to any warm freshwater aquarium.

What you set as water quality is more dependent on the majority of species you will use as primary residents.

You can keep a few apple snails in as small as a 12-gallon aquarium. A good guideline for you to follow is to add one apple snail for every three gallons of water.

A standard filtration sized to match your aquarium is sufficient to maintain a light water flow and acceptable oxygen levels. Underground filtration systems work well for this purpose.

As with most Amazon species and in particular with apple snails, you should change out 15% of the water weekly and clean old food and clots of waste off the bottom daily.

The apple snail is adaptable for all tank designs. They like logs and plants to climb and will feed on algae and decaying leaves. Sharp gravel bottoms can cut their feet and expose them to disease so using a soft substrate is a good practice.

For plants, a good planning strategy is to place vegetation heavily on the sides and back, leaving the central portion of the aquarium free for primary species to swim about. Apple snails will make full use of the aquarium including the walls.

A good, adjustable light and heating system will help keep the water in target condition and provide a good growing environment for your plants. Adjustable lights help imitate day and night. This cycle is important for any living plants you may have in the aquarium. A good heater will help maintain the water in the preferred temperature range.

Apple snails will crawl everywhere because they can. They will use the open-air portion of an aquarium to lay their eggs and will leave the tank if there is an opening. Out-of-tank plants such as pothos should be trimmed to stay within the aquarium and a sealed lid should stay on the aquarium so your snails and leaping fish do not escape to their doom.

Apple snails often go inactive when you first add them to an aquarium. They can stay sealed up on the bottom for up to several days from the stress of being moved until they feel secure. If this happens to you, just give them a few days and they will start moving around.

Apple snails are extremely peaceful and calmly go about their business. They make excellent tank mates with every peaceful species large and small that will not consider snails as food.

Here is a list of species that are a perfect tank mate for them:

Any combination of these species with apple snails will give you a colorful, active community tank to provide years of enjoyment and uncomplicated care.

What is equally important for you to consider is what species not to add. These are fish that will peck or worry at snails or at worst, use them for food.

Species to avoid include:

Unlike many varieties of snails, the apple snail is gonochoristic, which means that to breed a male and female snail is needed. Telling males and females apart is difficult at best.

There are many theories on how to do this, ranging from holding the snail upside down until it drops its trapdoor, and you can check for a penis sheath, to note that the female apple snail shell will become translucent when it is mating time.

Any of these might be true. The easiest way for you to establish at least one breeding pair is to put five or six apple snails in the aquarium and let nature take its course. Usually, one or more snails will change their gender so that breeding can occur. Relatively little is known about this process.

It is known that the male apple snail does impregnate the female. Once this has occurred, the female will leave the water to lay the egg cluster somewhere above the waterline.

Apple snail eggs are easy to identify. They are orange clusters about an inch to two inches long.

The gestation period is long. It takes 3 to 4 weeks for the eggs to hatch and when they do, there will often be hundreds of newborn, spec-sized snails. If this happens in an aquarium with other fish, even peaceful species might try to take advantage of a free protein meal.

The newborn are active feeders and grow quickly. In a week, they will be about the size of a pea. It takes an average of two months for the apple snail to reach golf ball size, which is also when they become sexually mature.

Some keepers will just let the community fish have the baby snails and are happy with the larger adult snails. If you have an interest in breeding snails, they can be very content in their aquarium where the newborns have no risk of being consumed.

Mixing snails of different colors and shell patterns will increase the likelihood of you growing fancy-colored snails.

Apple snails are scavengers that eat mostly vegetable matter but will also consume proteins when available. In the wild, they will eat algae, aquatic plants, decaying leaf matter, and dead fish.

In the aquarium, you will appreciate their ability to help keep tank walls clean by skimming algae. In addition, they will happily accept just about any omnivore foods that can sink to the bottom.

If using vegetables for feeding, blanch them in hot water to soften them before using. Vegetables can be blanched in a large batch and frozen in feeding-sized lots to help make the task easy to manage.

One of the most important factors in apple snail care is ensuring there is enough calcium in their diet to help with shell growth. Some hobbyists make blocks of snail food, sometimes called snail jello, to add to the feeding regiment.

There are many recipes for snail jello on the Internet. You can select one that works best for you.

The main ingredients are:

The ingredients are mixed with the gelatin acting as the binder. Once, set the food can be cut into squares and frozen. The blocks sink to the bottom and your snails will love it.

Some keepers believe that an Amazon basin community aquarium is only complete with a few apple snails. Add them to your tank and enjoy the colors, slow, steady movements and tank cleaning benefits apple snails will bring to you. 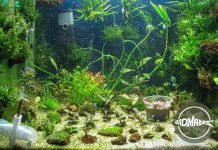 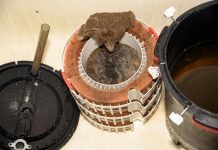 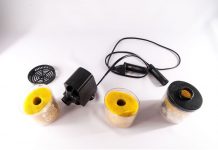 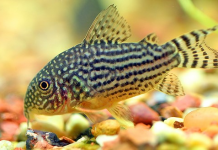