Probably all of us with an aquarium has – at least once — peered into our tank, seen the green/brown/black dots, spots or brush growing and yearned for the perfect algae-eating critter to make the mess disappear. Fortunately, there are some that can help manage your algae with some caveats and the understanding that no one type of beastie will cure all ills.

The first caveat. Some hobbyists are insistent that cleaning/removing algae is YOUR job and that no fish should be bought simply to perform this maintenance task. In other words, only buy these fish if you really like them on their own merits. Yes, but . . . .

Let’s face it, every fish in our tank has a “job.” The job may be to look pretty, to make babies, to be interesting, to inhabit certain parts of our tank. So I personally do not have a problem with obtaining a fish whose job it is to eat algae. They are a big help, particularly getting algae off plants. That said, I do not expect these fish to allow me to throw away my glass scrubbers, which leads to the second caveat. Algae-eating fish don’t “solve” an algae problem. There are many articles here and elsewhere that talk about balancing light and nutrition to avoid or mitigate algae. These charming critters, however, can help manage algae in an otherwise balanced tank, making it more pleasing to us and giving them nice full bellies in the process. So what fish are up for the job?

The oto. (Otocinclus):
When you look up “cute” in the dictionary, there’s a picture of an oto. These tiny (1.5″ inches according to the Badman’s profile) are peaceful, darling, inexpensive and very, very avid algae eaters – of certain algae. (Don’t expect them to get your black brush algae.) They eat mostly soft green algae. Be sure to get a gang of them, as they need company. Their big drawback is the difficulty of acclimating them. You are likely to lose quite a few soon after introduction. (My average is 50 percent.) Those that last for a few weeks, though, will probably stick around for a while. Be sure to check their belly when they’re on the glass, to make sure it is plumpish and round, meaning well fed. It your otos are looking skinny, you need to start feeding them. I use cucumber or zucchini zapped in the microwave for 25 seconds and hung on the glass with a veggie clip. 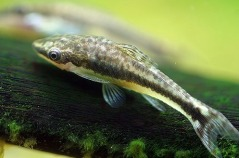 One of the best all around algae eaters, they are sensitive to water quality.

The pleco. (Plecostomus):
When you look up cute in the dictionary, you will NOT see a picture of a pleco. They have a face only a mother could love (although some argue they are so ugly they’re cute.) There many kinds, some very expensive and fancy and some don’t really eat much algae. Perhaps the most ideal of the group for algae-eating and small size is the bristlenose (also called bushynosed) pleco (BN). This fish will only get to about 4″-5″ and does a pretty good job without harming plants. They need a dark place to hide during the day and driftwood to rasp on. They also need to have their diet augmented with zucchini, cucumber and some other veggies or algae wafers. They are best at eating green algae off plants, ornaments and glass. 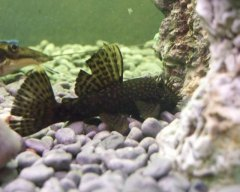 A face only a mother could love.

Siamese Algae Eater. (SAE):
Somewhat of a controversial choice for a variety of reasons. One is the difficulty of making sure the fish you bring home is actually an SAE and not one of the look-alikes, including the Chinese Algae Eater and the Flying Fox, neither of which are suitable for a variety of reasons. The SAE also gets rather large, as big as 6″, and prefer to be in groups, so this limits their usefulness to larger tanks. While the SAE is renowned for eating black brush algae, which so few other fish do, they also are not as devoted an algae eater as say the oto. In my experience, once they develop a task for flake food, they’re the first to the top at feeding time and only give a cursory nibble on the algae between meals. 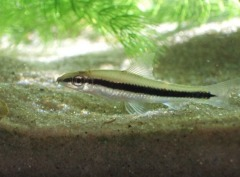 Not to be confused with the flying fox.

Amano Shrimp. (AKA Cardina Japonica):
Now these are back in the “cute” category. Plus these are probably the hardest workers, next to the otos, I’ve ever seen in my tank. They are incredibly industrious and will enthusiastically go after soft green and hair algae. There is some disagreement as whether or not they also eat black brush algae. Mine do not. You do need to get quite a few of them to make a dent, as they are small (no more than 2″). They also need a nicely planted tank with places to hide. Obviously, they can’t be in a tank with fish that will eat them. And they are not cheap – about $7.50 a pair in the Washington D.C. area. A final note: they are not supposed to be able to reproduce in freshwater tanks, which means you won’t end up with herds of them (see CRS below.) I highly recommend these little guys.

Beautiful just by themselves.

Cherry Red Shrimp. (AKA CRS):
Another cutie shrimp, which can be a lovely shade of red and only about 1″ long. Much of what is said about the Amano shrimp can be applied to these. They also are expensive and industrious, need places to hide and you need a bunch to make a dent in the algae. The primary downside of CRS, or so I’ve heard, is that they DO reproduce in the tank. And apparently they can get quite prolific. Some say they end up regretting their purchase as the CRS overrun the tank.

Others:
The American flag fish, rosy barb and black sailfin mollies are reported to eat algae, in some cases, including hair algae. The first has a mixed reputation and can be both aggressive and uninterested in algae, while others swear by it even for stubborn black brush algae. The other two fish are not usually purchased strictly for their algae eating proclivities, but some are pleased to discover it. 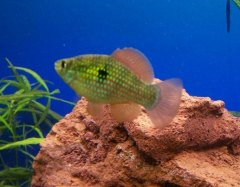 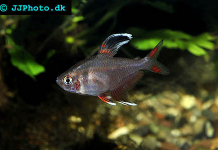 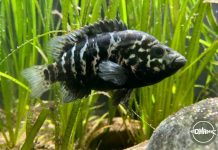 Cuban Cichlid: Get To Know This Large and Unique Species of... 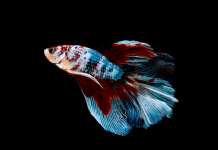 Betta Stress Stripes: How To Help Your Fish Calm Down 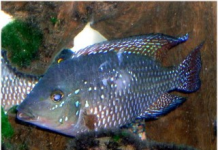