Dropsy, is actually a “symptom” and not a disease in itself. The standing scales and blown up appearance are the result of swelling within the tissues and organs of the fish due to a build up of fluids in the kidneys and an inability to excrete this fluid in a normal manner. In other words, advanced kidney dysfunction.

The problem with treating this disease is that there are a number of “potential” causes: bacterial infection, parasites, cancerous tumors, virus’, internal fungal infections or sudden temperature drop of more than 3 degrees.

If the cause is bacterial, the swelling typically comes on pretty rapidly. If swelling is gradual then one or more of the other potential causes are more likely. Unfortunately, treatment is most often useless at this point due to the advanced state of the disease process. When the illness, whatever the cause, has progressed far enough to cause internal swelling, the concomitant internal damage is usually too extensive to be repairable.

The latest research has shown that if the disease cause is bacterial and if the disease process is caught early enough, treatment with Romet B, a broad spectrum antibacterial, *may* be effective when used concurrent with an increase in water temperature to 84-86ÂºF for 2 weeks minimum.

Concurrently add 1/8 teaspoon of EPSOM SALT — per 5 gallons of water. Feeding foods soaked in ERYTHROMYCIN will kill the second suspected bacteria, Mycobacterium. In rare cases popeye has been found to be caused by Edwardsiella etarda. This is found *only* in fish that have been bred in outdoor ponds — the functional bacteria in this case is carried by frogs. While fair to good results in treatment have been found by feeding Romet B., even better results have been found using injectable chloramphenicol or amakacin. This is best done by your veterinarian.

If parasites are a known cause, treat for them first for 3 days increasing the temperature to 86ÂºF as fast as possible.

EPSOM SALT may help reduce the internal pressure caused by the swelling. Extremely good aeration is necessary here due to the use of such high temperatures.

NEVER USE SALT (sodium chloride, a.k.a. aquarium salt) for treatment of dropsy. This will KILL your fish in a very short time. The affected fish are already having a difficult time getting rid of salts due to kidney dysfunction. This causes the blown up appearance and concurrent scale standing. The osmotic imbalance caused by addition of sodium to your tank water will make this condition far worse.

EPSOM SALT on the other hand, does not pass through the walls of the gut or gills and will extract water OUT of the surrounding tissue into the gut where it *may* be excreted. 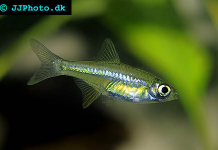