This is not a joke.

Puffer keepers quite commonly need to have large number of live snails to feed their wet pets. As many folk with a bit of a tendency to somewhat overstock or overfeed their mixed tank of fish have learned the hard way, so-called “pest” snails tend to multiply rapidly in such situations. The commonest “pest” snails are MTS (Melanoides tuberculata), common pond snails (Physa species), and common ramshorn snails (Planorbis species).

The first listed snail, the MTS, are not suitable for puffer feeding as their coiled cone-shaped spiral shells are very hard, too hard for many puffers’ dental plates to crush readily, sometimes resulting in a chipped or broken “tooth”/dental plate. That can pose a risk to the fish. As these fused teeth grow constantly, similar to the situation in rabbits and other rodents, the opposing plate will continue growing to the point that it may block the fish’s ability to eat at all. Even with a broken dental plate, the constant growth of these modified teeth requires a diet very high in “crunch”. In the wild their diet is in large part smallish snails and small bivalve mollusks (clams, etc.).

In captivity we must copy or simulate that diet to maintain dental health and long life for these fish. In addition to the visible dental plates, the puffers have teeth in their pharynx (throat) that are comparable in function to our molars. Those grind the already crushed food smaller. Larger bits of broken shell are spit out forward from the mouth; finer particles can be ejected through their gills. The last two types of “pest” snails are well suited for culturing to feed puffers. The smaller puffers such as Tetraodon biocellatus, the Figure-8 puffer (F-8) and Colomesus asellus, the South American puffer (SAP) in my care are fed diets made up largely of these cultured snails. The latter gets a diet of 95% live snails (SAPs are the worst in the family for tooth overgrowth, but that is controllable by a snail diet), the former gets at least 80% snails and up to the same 95% figure. Other two- to six-inch puffers are similarly fed, as are the younger, smaller sizes of larger puffers.

Even the most snail-infested tank likely will not supply the needs of these fish continuously, so a separate culture is the best path and far more manageable. The choice between the two other snails is in part simple availability – if only one is readily available to you, select that one. Overall, the common pond snails are the most productive for me, but it is a bit more difficult to get larger snails (one-half inch or more) from the culture. They reproduce when quite small and tend to overpopulate, even with regular harvests for feeding to fish.

This makes it more difficult to grow individuals to larger sizes due to simple competition. Culling excess is rarely needed but possible. Some large puffers (a foot or more in length) will ignore small snails, but will eat them as they grow to whatever is their minimum sized snack for that particular fish. The common ramshorn snails are a bit larger at reproduction, so it is possible to get more somewhat larger individuals from a culture tank. Large common pond snails have tougher shells than large ramshorns of comparable size, but this is not really an issue for most puffers, as neither is anything like as hard and strong as an MTS shell, so long as appropriate sizes are chosen for the particular fish (discussed in more detail below).

The tank chosen is personal choice, but I don’t keep anything smaller than ten-gallon tanks, so those or larger are what I have used for cultures. I have had quite a number of smallish puffers as well as several larger ones at a time for extended periods and needed lots of snails, and multiple snail culture tanks. Most of my dedicated snail culture tanks are purely minimum set-ups. Bare tanks (no substrate) with a filter (air or pump-driven sponges, smallish HOBs, or small internal canisters), plus a heater if needed – tropical temperatures will be more productive than room temperature. I do use lights on these tanks, as algae is valued snail food also.

The water should have a GH and KH at least of 4 degree (bit more than 70ppm) for each. Ideal hardness and alkalinity would be above 6 degrees (>100ppm) for each KH and GH. The upkeep done is standard tank care – weekly partials (50% at least) are standard in the cultures as well. If the culture is crowded and your KH/GH are marginal, more than one weekly partial is needed to support those parameters. The snail cultures tend to be moderately heavy bioloads (enough snail biomass to easily pollute the tank – you are using this as food for your fish, you neither want nor need pollution) and the snails use up a lot on minerals from the water that also must be replaced or renewed. Periodic testing of KH and GH should be done to be sure that your partials are maintaining the needed hardness levels.

Feeding is done with any prepared fish food, as you do want them to be well nourished and healthy for your fish. Green matter is provided as well by blanched or frozen and thawed dark lettuces, zucchini or other squash, cucumbers (seeds out – they don’t eat those, messy), etc. – all the things used also for plant or algae grazing fish. Those items are not specially stocked but generally what is in the refrigerator in a bit of excess. Remember, you are what your prey eats. So for healthy snail predators, you want and need healthy snails, well nourished and gut-loaded.

Feeding snails to the fish is as easy as with any other live food. You select the snail (the puffer’s eye size is a decent rough measure) or snails and pick it out of the culture and drop it into the fish’s tank. You may use your fingers but I use forceps. I do not want the puffer to associate fingers and food. Fingers are needed for working in the tanks. Puffers have extremely strong jaws and teeth designed for removing chunks of flesh or crushing shells. I am not available for tasting.

Any given new food may or may not be immediately accepted. Leave the snails in the tank. If the puffer has not recognized them as food in 24 hours, use the forceps to pick up and crush one and offer that by the forceps. They will smell it and are more likely to taste and learn quickly to eat cultured snails in the future. After a few days (these fish are quite smart), they grasp the concept and hunt on their own. Once conditioned to live snails, it is routine for snails to only rarely make it to the bottom of the tank before being consumed – they are caught while dropping through the water.

Puffers, as with most fish, have almost no restrictions on their willingness to eat. “Full” is only very rarely a functional concept for fish. When food is available, it tends to be consumed. Over-feeding is very unhealthy for fish. Puffers have no ribs, and also no scales on their highly elastic skin, so the food in their belly and gut is more visible than with more conventionally constructed fish. A lumpy looking gut is not abnormal; we are just not accustomed to seeing such in most of our fish. A lightly rounded but far from pot-belied look is generally good. Pot-bellied is too much. I have seen and heard more of puffers being fed until the can not swim – remember, they can expand their stomach to inflate their entire body to greatly enlarge their apparent mass. This is a dangerous practice, metabolically bad, and practically so as well as it contribute massively to tank pollution by undigested food being excreted in quantity. Puffers are high bioload fish at best; don’t make the situation worse by over-feeding. Long term overfeeding can result in liver and/or kidney damage as well, greatly shortening the life of the fish. “Killing with kindness” is entirely too common in our hobby in general, not just with puffers.

A side note on snails: Snails are easy to color-select when you are rearing them in numbers. Common ramshorns show color variation most often, but pond snails do to a lesser extent. If you see a snail with redder color (to the flesh) commonly with a bit lighter shell color as well -but if not that will come later, don’t select that one or ones as food, Leave it in the culture to be a breeder. After a few months of selection, you are likely to have your own strain of red ramshorns, which are better looking and may even be trade good at the LFS. White-bodied ramshorns are never strong for me; they are not very stable. But white-bodied pond snails may be quite viable and relatively stable. After a couple of years these color strains may need reselection or even cross-breeding followed by reselection if the color drifts in undesirable directions. The rich red of ramshorns, for example, tends to pale just a bit toward an orange-red, which while bright is not as good a color to me. I usually backcross to the wild type and reselect for a stronger, darker red. This at least gives you something to play with in the culture, and possibly may get you some credit at the fish store.

Apple snails are not good choices for puffer foods. Their generally periodic breeding rather than constant output, the greater demands on water volume, quality, and upkeep, and their increased food needs are all disadvantages as food items. The biggest negative is just that they grow too quickly and so need much more room. 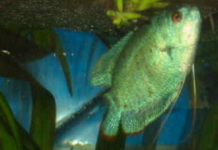 Labyrinth Fish: Everything You Need To Know About the Species 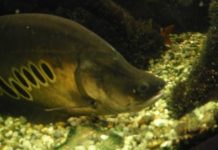 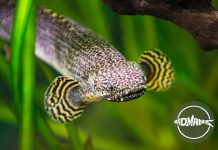 Delhezi Bichir: Is It a Carnivore or Omnivore Fish? 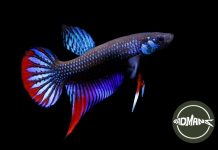 Betta Imbellis: The Ultimate Care Guide for the Quasi-Peaceful Betta