Have you ever wondered how much water your tank actually holds? You might not think it’s important to know the specifics, especially if you’re running a lightly stocked tank, but the size difference between what your tank is called (a 10, 15 or 20 G) and the amount of water that your tank can actually hold can be considerable. It can mean the difference between having a tank that’s healthy & easy to care for and having a tank where, despite your best efforts, your fish and other pets have to struggle to survive.

When most people buy a tank they take for granted that their:

But what most of us probably don’t know is that aquarium manufacturers calculate tank volume using measurements from the outside of the tank, not the inside, where our fish actually live. It sounds like it wouldn’t make much of a difference, but take the case of a 20 L tank: 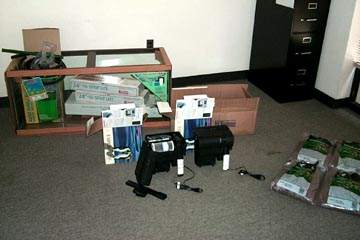 The outside dimensions of a 20 L tank as listed on All-Glass Aquarium’s website are:

Convert cubic inches to gallons by dividing by 231 and you get 20.87 gallons.

That seems o.k., but when you measure the inside dimensions of the same tank (measuring up to the bottom of the frame, where most people fill their tanks to) it measures:

So before you add anything to your tank, including substrate or fish, your 20L only holds about 16 ½  gallons.

Then I went to my local fish store and measured the insides of those tanks (up to the bottom of the frame) and calculated the inside volumes.

What I found was that the outside dimensions fell fairly close to the tank name on most tanks (with the exception being the 75 G which measures 82 gallons from the outside.) But the inside dimensions were consistently smaller than the tank names, sometimes by as little as just under 1 gallon (5.5 G) and sometimes they were as much as almost 10 gallons smaller (75 G). 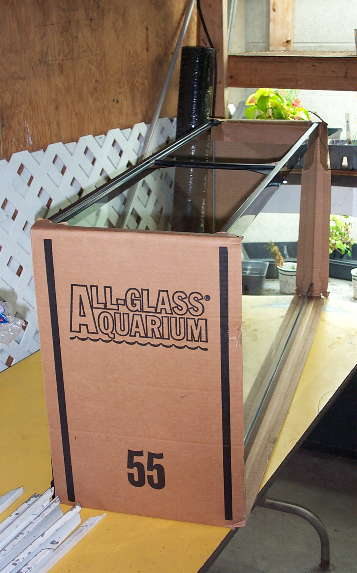 This made me curious enough to call three of the largest aquarium manufacturers (All-Glass, Perfecto and Top Fin) and ask them:

Customer service at All-Glass checked with their tech. support and reported that they name their tanks based on a rough estimate of their external volume. They recommend filling their tanks up to the bottom of the frame line. Nobody fills the tanks up to test and see how much water they actually hold. In fact, it’s company policy not to even refer to gallons any more (so a 20L is more of a model number than actually saying that that tank can hold 20 gallons.)

Customer service at Perfecto also checked with tech. support and reported that they, too, use the external measurements to calculate volume and since the numbers don’t work out exactly, they just round up. They recommended filling their tanks anywhere from a few inches from the top to filling them up to the bottom of the frame line. Regarding the difference in volume, I was only told that the company had been building tanks this way for the last 30 years.

Customer service at Top Fin checked with their aquarium expert who said that they also base the names of their tanks roughly on external volume. The person working customer service had only filter information to refer to, so regarding how full to fill their tanks, I was given a range of anywhere from filling the tanks up to the topmost surface to filling them up to the inside ledge to filling them to the bottom of the frame. When I mentioned that there was a notable difference between what the tanks are called and the volume of water they can hold I was told that tanks are returnable if the customer is unhappy.

So your tank starts out smaller than you expected, but what happens when you add substrate?

Decorations, especially substrate, take up space and reduce the amount of water your tank can hold. Since most people add substrate to their tanks using one of two guidelines (inches or pounds,) you can figure out how much water volume your substrate displaces one of two ways:

The inches guideline says that you should have 1-2 inches of substrate in your tank. You can use the formula for volume to figure out how much water volume will be lost by adding a given depth of substrate.

Calculate the volume of your substrate (internal L x internal W x approx. substrate depth)
Subtract that answer from your tank’s internal volume when it’s empty.
Then to convert cubic inches to the number of gallons lost, divide by 231.

Here’s a chart showing the approximate volume of tanks after adding one or two inches of substrate: 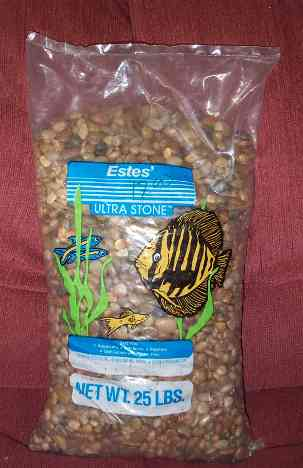 The pounds guideline says that you add one pound of substrate for every one gallon of tank space (most people base this on what their tank is called, such as a 10G, instead of basing it on the actual internal tank volume.) One pound of substrate displaces about .078 gallons of water volume. So to figure out how much water is being displaced by your substrate, just multiply the number of pounds of substrate that are in your tank by .078.

For example: A 10G tank has an internal volume of about 9 gallons.

Most people would add 10 pounds of substrate to a 10G tank.

So 10 pounds of substrate added to a 10G tank lowers your tank’s water holding volume to 8.5 gallons.

Using displacement to calculate your tank’s internal volume is a little more exact than using the inches method and it’s especially good for figuring out how much water is being displaced your other decorations (such as driftwood, caves and rocks.)

So What Does All of This Mean?

Most of us treat our 10 G tanks as though they hold 10 gallons of water. We buy filters, heaters, lights and fish
based on the idea that they will be existing in 10 gal. of water. But the truth is the usable space in our tanks is less (sometimes far less) than what we may have planned for. Our fish need a certain amount of space to be able to live happy, healthy lives.

So keep in mind your actual tank volume when you’re: 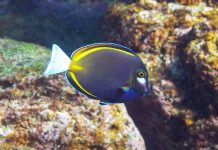 Acanthurus Nigricans: Find Out How To Look After This Surgeonfish in... 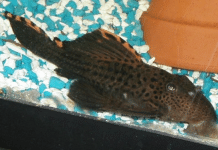 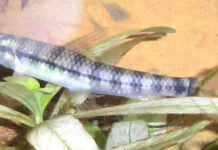