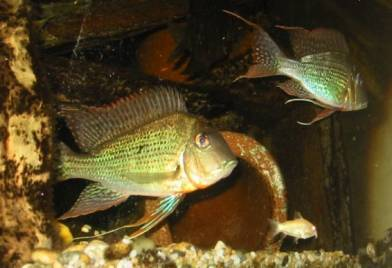 G. Surinamensis is a peaceful, relatively non-territorial cichlid, with beautiful, almost iridescent patterns of blue, green and red markings. As their common name suggests, they are ferocious diggers, foraging constantly for food in the substrate. They are well designed for this, with a long, sloping forehead and eyes placed high on their head. They are slower growing than a lot of other SA cichlids and it does take them a while to get to adult size.

Being more peaceful in nature than most cichlids of this size, they are more suitable for large community tanks as they will not bother smaller fish. However, this peacefulness makes them less suited to tanks containing other large, more aggressive fish. When in situations like this, they tend to spend a lot of time hiding and can become stressed very easily.

Their juvenile coloration is considerably less dramatic that their adult colours, but considering how beautiful they become as they grow, it is well worth the wait. They are somewhat shy by nature and it can take them a lot of time to be comfortable enough to come out and visit their owners, but this will happen eventually and they can become quite friendly.

Their preference, like many South American cichlids, is for softer water and it has been many people’s experience that hard water can diminish their coloration, but I have not found this to be the case with mine. They are hardy fish, tolerating a reasonable range of ph’s, but are most comfortable with a neutral ph.

In the wild, G. Surinamensis are found in quiet pools and backwaters in the rivers they inhabit. Their natural habitat does not contain much in the way of plants, but has more large root systems and rocky banks. Substrate should be sand or very fine, well rounded gravel, as they spend a lot of their time sifting through it searching for food, Larger, sharper types of gravel should be avoided as it can cause injuries to their face and mouth. Any plants that are included in the tank should be well secured otherwise they will be consistently dug up and possibly nibbled on occasionally.

As they grow to a reasonable size, a tank of 55 gallons or larger is necessary for a pair. They are comfortable in larger groups, so they do well in larger, species-only tanks, but care should be taken to make sure there is enough room for each fish to dig without banging into a tankmate. The tank should be wider rather than taller, giving as much substrate surface as possible for foraging. G. Surinamensis are not overly fond of large, open spaces, but this can be gotten around with the addition of floating plants or large pieces of driftwood that allow swimming space underneath. Caves are a good addition as well, as these fish like to have somewhere secure to retreat to between feeding sessions

Good filtration is essential, as their constant digging will stir up the substrate. Under gravel filters are not recommended, as they will be uncovered on a regular basis. It is important to keep the water quality high, as they are susceptible to HITH disease if kept in poor conditions.

G. Surinamensis feed mainly on small crustaceans and substrate-dwelling creatures in the wild. Their diet also contains a fair amount of vegetable matter. Anything fed to them in an aquarium should sink, as their preferred method of feeding is to sift through the substrate.

They are fond of foods such as whiteworms, bloodworms, daphnia and brine shrimp, but animal proteins are not considered to be good for them. I currently feed mine a mix of various small sinking pellets and a home-made mix of green vegetables and shrimp, which they go crazy over. Spirulina is a good addition to their diet, as it brings out their blue and green coloration.

These fish are peaceful by nature, considering their size, and are suitable for large-scale community set-ups containing smaller SA species, such as Tetras and Corydoras catfish. They do not consider smaller fish to be food, and generally will not pay them much attention.

They also are very tolerant of each other, so can be kept in larger groups if tank size permits. However, they tend to do poorly when in tanks with more aggressive species such as Oscars, as they prefer to run than to stand and defend themselves.

Eggs are generally laid on a smooth piece of rock or a small pit dug into the substrate. Unlike most SA cichlids, G. Surinamensis are partial mouthbrooders, either parent will take the fertilised eggs in their mouth and hold them until hatching which occurs around 3 days later. After hatching, the fry will stay close to their parents, taking shelter in their mouths if danger threatens.

As with most cichlids, the parents will be very protective while caring for a brood, and this is the only time that any serious aggression will be shown. They breed more readily in softer water with a neutral ph, and many people have had success using one of the “blackwater” water conditioners that are available, as they simulate the fishes natural habitat. I have had no success breeding my pair and I believe this is due to the hard nature of my water. The picture above is of my male, showing the long extensions on his fins

I purchased a pair of these fish a little over 2 years ago knowing next to nothing about them. At first, I did regret this decision, as their juvenile coloration was somewhat boring and they tended to hide a great deal.

However, once they reached maturity, I soon changed my mind. They are truly spectacular fish, with dramatic coloration and a very good temperament. Anyone looking for an attractive, large cichlid without the personality problems that come with many of them should definitely consider these as an alternative. 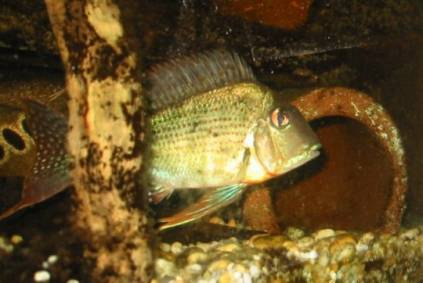 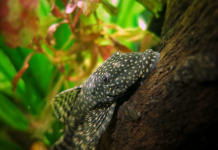 Synodontis Catfish: Your Guide to Care and Maintenance