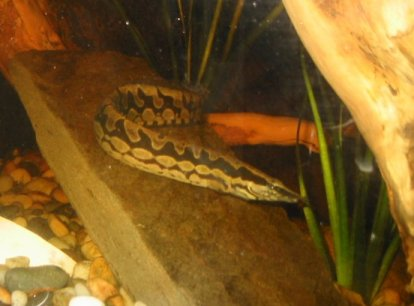 The Tiretrack Eel is the largest of the spiny eels available in the hobby. Although they look like eels, they in fact are not. Instead they are fish that have developed an eel-like profile in order to hunt more effectively. They are very personable, friendly fish which will interact readily with their owners and can be great fun to keep.

Tiretracks, like all spiny eels, are mainly nocturnal, spending most of the day buried in the gravel, or another dark protected space, with only their heads exposed. This makes them hard to spot in an aquarium, particularly if using a dark coloured substrate. They are also master escape artists, being quite capable of climbing out of the water and through any holes in tank lids big enough for them to get through. They are also considered to be very intelligent, certainly on a par with the larger cichlids, and can grow to be very friendly to the person from whom the food comes. Tiretracks will occasionally snack on smaller tankmates, but this is an uncommon occurrence.

When small, they do tend to be skittish and easily scared, but this soon changes as they grow and get used to their owners. They are also extremely hardy fish once they reach around 7 or 8″, but they can be sensitive to water conditions when smaller. When young, Tiretracks can be badly effected by the stress of moving, so if you are looking to buy one, it’s a good idea to make sure it has been at the fish store for a minimum of a week before taking it home.

Tiretrack Eels grow to a considerable size and although they are not constant swimmers, they do require a lot of tank space, 150 gallons(570litres) or bigger. As they spend most of their time buried in the substrate, the substrate needs to be rounded with no sharp edges that could cause injuries. Sand is sometimes used in tanks with Tiretracks, but they seem to prefer very fine gravel, as this is easier for them to burrow into than sand. A tank for a Tiretrack eel needs to have enough open substrate for them to have several places to choose from to hide. Rock piles and lots of plants are also appreciated as they give cover when the eel comes out at night to hunt. Many people have had success with burying narrow flexible plastic pipes below the substrate for the eel to use as a hiding place. This has the added bonus of helping you find your eel much more easily than trying to spot the nose poking up above the gravel.

In their natural habitat, Tiretrack eels inhabit slow moving rivers and lakes, often being found close to a rocky shoreline that provides good cover for hunting. They live at a pH of around 7 in the wild, but can adapt to conditions with a pH as high as 8. Care should be taken with younger fish, though as they are not as tolerant as adults are.

In the wild, Tiretracks live on small crustaceans, varieties of worms and small fish. In a tank, they often prefer live food, but can be induced to eat frozen bloodworms, glass worms, krill and daphnia, to name a few. Live earthworms are eaten with great relish, mealworms are sometimes accepted, but it depends on the fish. My 13″ eel refuses mealworms at all times, but can eat a phenomenal amount of earthworms if given the chance. Live maggots are also enjoyed if you can stomach breeding them. I use chicken fillet to get the eggs laid, then slice the eggs off the fillet with a very thin piece of the chicken and put them into a plastic container with some grass and put that into a warm place. It usually takes 3 to 4 days for them to hatch and using grass, there is none of the smell of rotting meat that is usually associated with maggots. As they are sometime predators, they are not safe to keep in community tanks with small fish such as neon tetras. Hunting occurs at night, and is done by ambush, waiting until a fish comes close enough to where the eel is buried then shooting out to grab the prey.

It is very easy to train Tiretracks to be fed by hand, which can be useful when kept in a tank with larger fish that also appreciate the same kinds of food. They are very curious and friendly once they get used to their surroundings, and have been known to come out and sit in their owner’s hand to be fed. They do not need to be fed on a daily basis, even when small, as they do not waste their energy doing a lot of swimming. Once every two days is usually sufficient for fish up to around 7″, and as they grow larger, they can often go a week or more without eating.

Tiretrack eels are not suitable tankmates for small fish, but they do well with medium size cichlids then smaller, and larger fish as they grow. They are not tolerant of others of their own species or of other eels, but have a tendency to ignore most other fish. They are relatively peaceful, except towards their own, and don’t constitute a threat to fish that are not large enough for them to eat.

There is no way to tell the difference between the sexes in Tiretrack Eels, and not much is known about their breeding habits in the wild. To date, there have been no reports of Tiretracks being bred in aquariums.

I have had a Tiretrack Eel for a little over two years now, from when he was around 5″. He is now 13″ and very friendly. When he was smaller, he spent a lot of time hiding in various places around the tank, from caves to inside pieces of driftwood, but he would always come out to be fed. Hand feeding him is great fun and a real talking point for friends that have seen me do it. My Tiretrack has lived with firemouths, Oscars, clown loaches, my clown knife fish and various catfish with very few aggression problems at all. Tiretracks are beautiful fish and well worth the hours spent digging worms in the garden. They do require a fair amount of work in feeding, but if you are prepared to put in the time and effort, they make a great addition to a large tank. 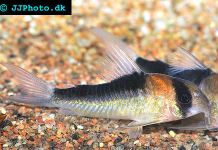 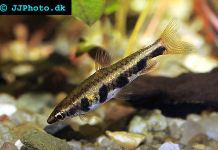 Dropsy tropical fish disease, Article 28 on the care, upkeep and...