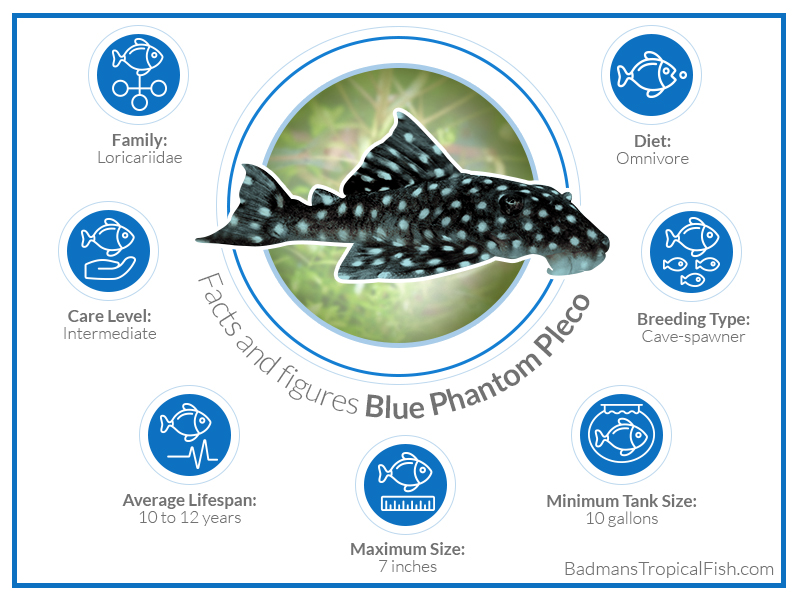 If you’re holding yourself back from getting a Blue Phantom Pleco because of incomplete info, we’ve got just the solution. Take a moment to go through our complete care guide to get the lowdown on this species and whether it’s the right option for your fish tank.

What Is a Blue Phantom Pleco? 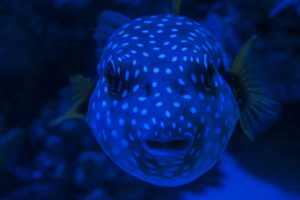 Blue Phantom Pleco is a freshwater fish that originates from the tropical habitats of South America and the Rio Orinoco River in Venezuela. A beautifully marked species, these plecos are members of the Loricariidae family.

The makings of a perfect care guide or fish profile require accuracy, precision, and depth. That’s precisely why we got out of our way to reach out to professionals for expert input to ensure you have all the details you need for looking after a species.

This Blue Phantom Pleco guide is no different. This section will focus on the details of diet, tank habitat, and water parameters to make sure you have the complete picture of what looking after the L128 species truly involves.

One of the things most people (including us) love about the Plecostomus species of catfish is that they’re entirely no-nonsense when it comes to diet. Blue Phantoms are omnivores and like grazing for algae in their spare time. That doesn’t mean fish keepers are off the hook when feeding the species.

Blue Phantom Plecos do well on a diet of good-quality pellets or flakes, which constitute everything the fish species needs to thrive. However, since the species are omnivores, they don’t mind the occasional thin slice of courgettes or cucumbers. They especially like the taste of live and frozen snacks like brine shrimp or bloodworms.

The only factor you should always keep in mind is that if your tank has plenty of algae for Blue Phantoms to graze on, you should be careful about not overfeeding your aquatic pets. As you know, the more your fish will eat, the more waste it’ll generate, and that can affect your tank’s water parameters.

As we stated earlier, Blue Phantoms like having plenty of space to move around the bottom layer of the tank. That’s why the minimum Blue Phantom Pleco tank size is 10 gallons. However, experts recommend a fish tank with 20 to 30-gallon capacity would be better.

As the species hail from the Rio Orinoco River in Venezuela, they’re used to strong currents but can adapt relatively well to mild water movement too. They enjoy staying in moderate to warm waters ranging between 77 to 85 F, with a pH level between 6.0 and 7.0, which means they don’t do well in alkaline waters.

Prospective Blue Phantom owners should also remember that the species is pretty sensitive to abrupt changes in water parameters. That’s why it’s best to invest in a robust water filtration system to filter media and maintain oxygen levels. You should also have a handy water testing kit on hand to keep track of water conditions.

If you’re thinking of adding a Blue Phantom Pleco to your community tank, you can forgo air stones and other similar devices by relying on a powerhead to make gentle waves in your tank. Doing so will keep the current in your tank tolerable for other fish species.

When it comes to recreating the ideal tank habitat for Blue Phantoms, its best aquarists strike a balance between decorations and free space. Too many decorations will lead to your tank’s base layer being crowded, leading to your Blue Phantom Pleco acting hostile.

It’s best to ensure your Blue Phantom has enough space to move around the soft sand substrate and has good resting spots provided by rock structures or driftwood.

Natural aquatic plants with a leafy appearance will help supplement the aquarium’s oxygen levels and help create algae for your Blue Phantoms to feed on.

Blue Phantoms have an average lifespan of 10 to 12 years in captivity, and in the wild, the species can survive a little longer than 15 years. However, remember, these stats are meant for the best-case scenario, with ideal tank conditions and near-zero disease incidence.

It’s best to keep in mind that lifespan is heavily dependent on the quality of care you’re able to provide. The more ideal your Blue Phantom’s tank conditions are, the longer it’ll likely live.

You should note that most of these illnesses are related to inadequate water conditions, and taking preventative measures (i.e., keeping the water clean) should help prevent the ailments.

Your fellow aquarists may advise you that over-the-counter antibiotics may clear up most diseases Blue Phantoms can contract. However, without proper diagnosis and dosage details, self-medicating can cause more harm than good. That’s why it’s always best to refer to an aquatic veterinarian if you suspect your Blue Phantom Pleco is ill.

A trip to the vet will also save your aquatic pets unnecessary pain and stop the disease from spreading to other occupants of the tank.

Stress is another factor to consider when it comes to illness among aquatic pets. Fluctuating water conditions, inappropriate tank mates, or overcrowded tanks can lead to your Blue Phantom developing stress, directly impacting immunity and overall health.

However, be sure not to house more than one Blue Phantom in the same tank (or other bottom dwellers) because this might trigger their territorial instincts and lead to aggression.

Here are some species that are compatible with Blue Phantom Plecos:

When it comes to breeding Blue Phantoms, the process isn’t exactly easy and often results in unsuccessful attempts. Experts are unsure why this species is particularly difficult to breed in captivity. Still, some suggest it might have to do with the fact that most specimens sold in trade are captured in the wild and aren’t used to breeding in captivity.

Aquarists state that the species aren’t easy to breed even in separate tanks in mixed-gender groups. Perhaps, the only uncomplicated step in the entire reproduction process is sexing the species. Male Blue Phantoms have more streamlined bodies compared to the more rounded form of females.

The few professional aquarists who are successful in breeding this species need to rely on the use of artificial hormones, which isn’t something everyone has access to or understands.

In the wild, Blue Phantoms are cave-spawners, and like most members of the Pleco family, the males guard the eggs until they absorb the yolks.

You will generally be able to tell your Blue Phantom Pleco is pregnant by noticeable changes in behavior and appearance. The females will immediately appear more bloated, with roundness around the stomach area. Once pregnant, females will also take to resting more in secluded and well-covered spots in the tank.

That’s the main reason why we like to kick off our fish care guide articles with a historical context. For example, did you know that all algae-eating catfish are referred to as Plecostomus? That’s where the species get the name Blue Phantom Plecostomus from.

A quick Google search will reveal that the scientific name for Blue Phantom Plecs is Hemiancistrus sp., but the truth is, they remain scientifically unclassified. However, experts will tell you that aquarists rely on the L-numbers system to differentiate between the species in the Hemiancistrus genus. Blue Plecs have the designation — L128 — to avoid confusion.

The species frequent the river rapids and move around rocks during the day. However, they’re pretty adaptable to mild water flow, just as long as the water they’re kept in is highly oxygenated and clean of impurities.


Aquarists are often interested in learning how big a particular species can grow or their lifespan because these details help them plant their setup. We also get questions from anxious hobbyists wondering why their fish won’t grow despite being given the appropriate diet. That’s where this section can help.

Upon maturity, Blue Phantom Plecos can reach up to seven inches in size, but they’re not incredibly fast growers. Most fish keepers can expect one-half-inch of growth per year, which means it’ll take a few years for your fish to achieve their full size.

Undernourished specimens may have trouble reaching lengths of seven inches, and that’s why you should rely on good-quality pellets or flakes to ensure the species’ nutritional needs are met.

Did you know that the Loricariidae family of armored catfish contains some of the most beautiful and colorful freshwater fish specimens?

Unlike the name suggests, Blue Phantoms aren’t completely blue in appearance. Instead, the catfish species has an inky charcoal body and bright cobalt, light blue, or white spots. However, the shimmering blue spots atop their fins truly stand out under good lighting conditions.

As with all the Loricariidae catfish, Blue Phantoms also sport thick plates on their bodies instead of scales but have a soft underside.

As far as temperament or behavior are concerned, Blue Phantom Plecos are calm and peaceful. The species like keeping to themselves and have a solitary nature, and that’s also why they tend to get along with most other types of freshwater fish.

However, here’s the rub, Blue Phantoms don’t do so well with other Pleco species. Housing them with other Plecs can result in aggression as they see the others as intruders encroaching on their bottom-level territory.

Unlike slow-swimming species like Vampire Plecos, Blue Phantoms are pretty active and like moving around the base layer of the fish tank. They do, however, share the Vampire Pleco’s love of wide spaces and need a spacious tank to stay comfortable.

Blue Phantom Plecos are more suitable for intermediate-level aquarists because they require specific water parameters and are sensitive to abrupt water changes. However, their peaceful nature and algae-eating tendencies make them ideal additions to single-species or community fish tanks. Let’s look back at the key points of the article:

Blue Phantom Plecos are an excellent option for aquarists looking for suitable candidates for community tanks. They’re peaceful, solitary, and like to keep to themselves. But, most of all, their vivid coloring can help uplift the appearance of your fish tank. 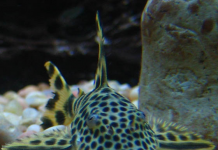 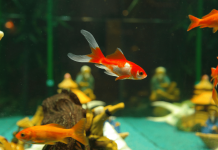 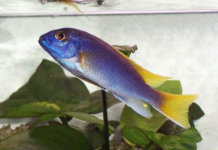 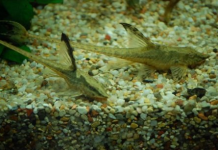