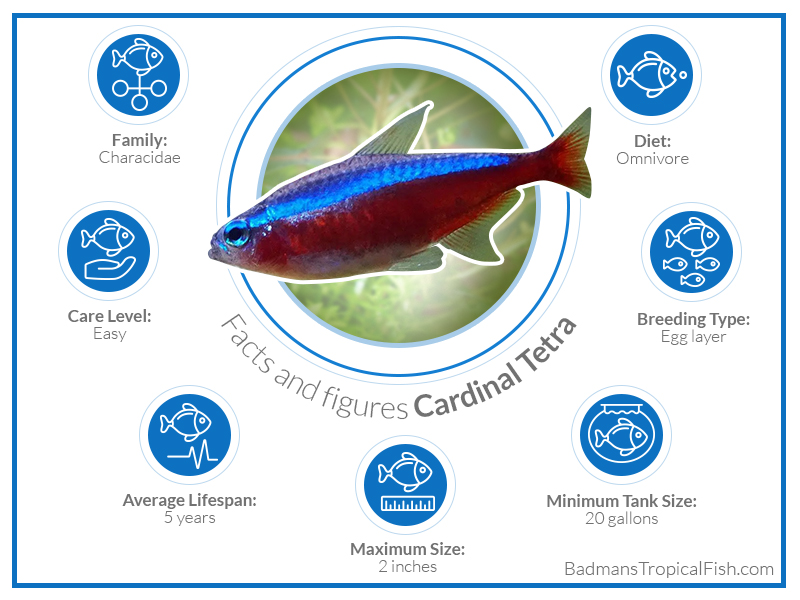 Tetras are somewhat of a rite of passage for beginning aquarium keepers. They are available through most fish supply outlets and are not an expensive species to acquire or replace. Once keepers have learned on Neon Tetras, moving up to the larger, more colorful, and complex Cardinal Tetra is very manageable in single or mixed species tanks.

Cardinal Tetras are one of many thousands of species of collectible fish that come from South America. They are a social, schooling species found extensively from Venezuela through Brazil and Eastern Columbia. They are prevalent in the Rio Negro and Orinoco river systems and live in the mid-water layers of eddies and seasonally flooded forests.

The species moves back and forth from the river to the flood lands during the rainy season for breeding and shelter. Cardinal Tetras prefer this highly tannic water because of the heavy amounts of rotting vegetation that give it a dark color, almost like coffee. It is in these dark waters that the Cardinal Tetra can be at its most vivid color. As floodwaters recede, the Cardinal Tetra follow them back to their typical river habitats. The species form shoals of fish ranging from the hundreds to the thousands and make sheets of vivid color in the water that is quite amazing to see. 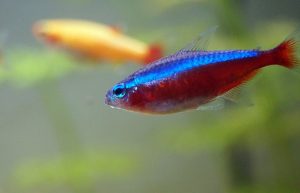 Coloration is one of the main ways of distinguishing between Neon and Cardinal Tetras. They a bright, neon blue stripe running vertically along their back. Only the Cardinal Tetra has this stripe running the entire length of its body. This vivid stripe against their deep red lower bodies, especially in dark water and low light tanks, makes an attractive display as the fish swim in shoal formations.

Listed tank sizes are the minimum.

The Cardinal Tetra is a species that can do very well in captivity under specific conditions. Whereas cichlid and catfish species can tolerate a wide range of temperature, pH, and hardness, the Cardinal Tetra needs a water mix that closely mimics their native environment.

The ideal Cardinal Tetra water temperature is 75°F to 84°F (24-29°C). Keepers should maintain a water hardness of 2.0 to 8.0 and a pH of 4.5 to 7.0, and the aquarium must stay within this narrow range. Otherwise, problems and sickness can quickly spread.

A standard filtration sized to match your aquarium is sufficient to maintain a light water flow and acceptable oxygen levels. Underground filtration systems work well for this purpose. This is a species where a 20-gallon tank will support 10-12 Cardinal Tetra and a few peaceful tankmates.

Scaling up to a tank 100 gallons or more presents the opportunity to have a school of over 100 Cardinal Tetras, which make a fantastic display as they swim about in unison. They can tolerate stagnant water for only a short time, so we recommend weekly water changes.

Since the species spends a significant portion of its time in flooded forestland, Cardinal Tetra’s do best in tanks with either natural or artificial plants. A good planning strategy is to place vegetation heavily on the sides and back, leaving the aquarium’s central portion free for the Cardinal Tetra to swim about. You can add sticks or other similar structures. Just make sure to monitor the water closely so the Cardinal Tetra pH levels do not fall too low.

They will appreciate having vegetation in which to rest, nibble on plankton, and breed. The foliage provides dim light to imitate the river environments’ dark water conditions, cues the Cardinal Tetra to shine their most vivid colors.

A good, adjustable light and heating system are also critical for Cardinal Tetra care and maintenance. Adjustable lights help imitate day and night. This cycle is vital for any living plants you may have in the aquarium. A good heater will help maintain the water in the preferred temperature range. Cardinal Tetras are pretty intolerant of water temperature changes.

The neon tetra disease results from a parasite called Pleistophora hyphessobryconis. The parasite enters fish through the consumption of infected live or dead foods. Infestations can occur in aquariums when infected fish are inadvertently added to healthy stocks. The parasite essentially consumes the host fish from the inside out, spreads quickly, and is not treatable.

At the first sign of infection, you should remove diseased and dead fish from the aquarium. Indications you have something wrong with your Cardinal Tetra include restlessness, significant loss of coloration, lumps on the body, and difficulty swimming.

In more advanced cases, Cardinal Tetra will display crooked bodies, bloating, and visible fin rot. If you lose a fish tank to the disease, it is an excellent idea to empty the tank, thoroughly clean, and start a new display.

The only way to prevent the introduction of neon tetra disease to an aquarium is to quarantine any new additions for up to two weeks before introducing them to the tank. Try to purchase fish in person and visually select healthy specimens from a reseller who will guarantee their quality. If you are buying aquarium fish online, be sure the reseller will guarantee their fish for at least 30 days. 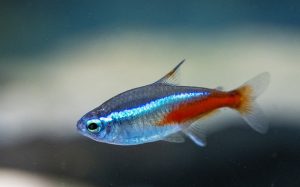 Cardinal Tetra compatibility makes it a great neighbor with many kinds of similarly gentle South American river species. A natural tank mate is the Neon Tetra. Adding them in groups of 10, same as Cardinal Tetra, per 20-gallon tanks will give you an ever-moving, shimmering display.

Species such as danios, guppies, and rasboras make good tank mates because they are small, peaceful fish and don’t significantly impact the tank’s bio-load. A few small catfish or specimens such as compatible snails also help balance out a tank.

While it may be tempting to introduce larger species, even semi-aggressive fish can harass or dine on tetras. At a minimum, avoid adding species that can fit a Cardinal Tetra or other tank mates in its mouth.

It is possible to get Cardinal Tetra to breed but considered impractical to do so as inexpensive to purchase and widely available. If you want to encourage yours to breed, there are a few things to keep in mind. The first is that convincing them to breed is not an easy task as you are trying to recreate the conditions of a flooded rainforest.

Tetra eggs and fry are tiny and easy prey for all sizes of tank mates. Suppose you are attempting to get your Cardinal Tetra to breed. Have a holding tank where you can place adult fish until the fry is large enough to avoid being consumed.

You can try to convince Cardinal Tetra to get into breeding mode by changing the water qualities to match the changing conditions they would encounter in the wild. The easiest way to do this is to keep the temperature steady, narrow the pH range to 5.0-6.0, and soften the water down to 1-2 dH.

Keep a close eye on the vegetation in the tank. If you observe eggs attached to the plants, remove the adult fish. Cardinal Tetra eggs usually hatch within 24 hours. Fry can be fed tiny brine shrimp. It takes about a week for the fry to be independent and large enough to be safe from being eaten by other tank mates.

The most straightforward aspect of caring for Cardinal Tetras is feeding them. They are not fussy and will accept most anything offered. The species is happy with frozen, freeze-dried, or live food, and a mix of offerings keeps them from getting turned off by a mono food type.

Usually, they prefer meaty protein foods, some of which may need to be chopped to a size small enough to fit in their mouths.

Feeding once a day in the morning or evening is fine but try to limit how much food is put into the tank so that the actual feeding takes no more than three or four minutes. This prevents overeating, which can lead to other illnesses. You can tell your Cardinal Tetra are getting too much feed if their stomachs start to appear bulged.

Limiting feeding time also prevents excess food from falling to the bottom of the tank and rotting. This can introduce bacteria and other potential illnesses that can wipe out an entire tank in a few days.

Aquarium keepers of all experience levels have Cardinal Tetra displays for the beauty and color it brings into their homes. Whether you are new to the hobby or looking for something new, building a South American Rainforest tank with Cardinal Tetra and tank mates will provide a visually pleasing and rewarding keeper experience. 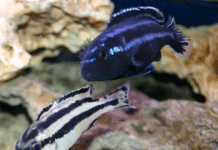 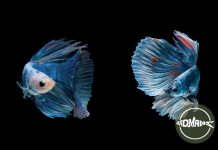 Betta Sorority: The Inside Scoop of Setting It Up 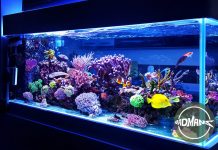 Fluval Flex Review: Why It Is the Perfect Fish Tank for... 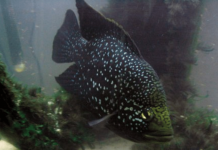