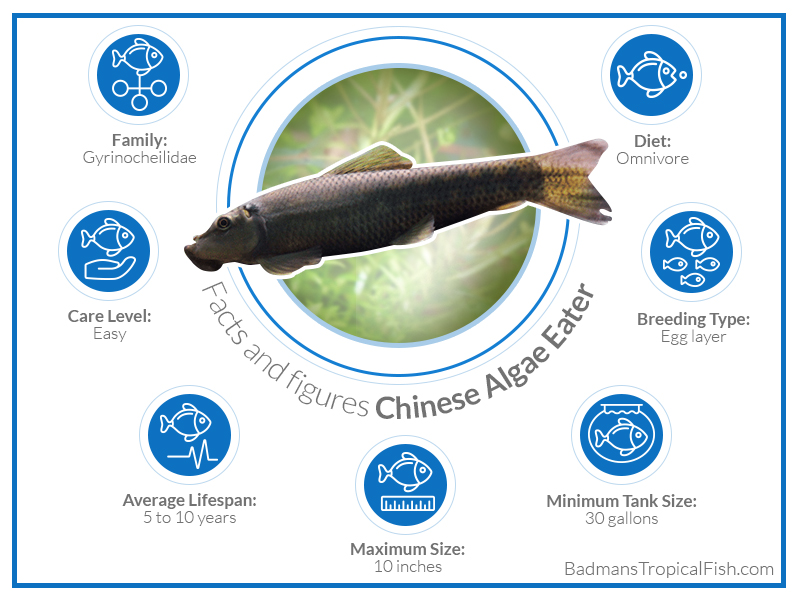 Though not the most beautiful fish, many aquarists appreciate the Chinese Algae Eater, also known as gyrinocheilus aymonieri.

As juveniles, these fish deliver an excellent job of preventing algae overgrowth in your tank.

Read on, so you can decide if they are a good fit for you.

The Chinese Algae Eater is a misnomer. This species is not exclusive to China. Some specimens can be found in the Yunnan Province of China, but the lion’s share of the population is in Southeast Asia.

Described in 1883 by Tirant, the Gyrinocheilus aymonieri inhabits: 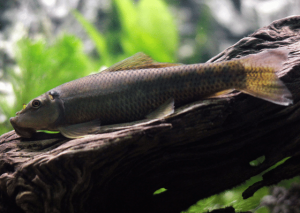 However, the Chinese Algae Eater is seldom kept as an aquarium fish in Cambodia. The fish is farmed and sold in markets to make Cambodian cheese. Natively known as “prahok,” it is a fermented fish paste used as a staple ingredient in Khmer cooking.

Chinese Algae Eaters primarily inhabit clear, shallow waters in which the bottom contains gravel, pebbles, stones, and sand. These fish prefer areas that are often exposed directly to the sun, as it promotes the growth of biofilms on the rocky bottom.

Chinese Algae Eaters also perform seasonal migration and enter deeper, fast-moving waters. Despite the strong current, these fish are more than capable of anchoring themselves to rocks and other surfaces.

The Chinese Algae Eater has an elongated body that looks similar to bottom-dwelling loaches. Hence, it earned the nickname “Chinese Loach.” 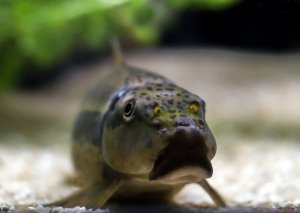 A juvenile Chinese Loach measures one or two inches in length and reaches maturity at 4.5 inches (12 cm). In the wild, a full-grown Chinese Algae Eater can reach a whopping 11 inches (28 cm), but captive specimens are often smaller. The largest I have seen in an aquarium is 6 inches.

Chinese Algae Eaters are not as vibrant as some other aquarium fish. These fish are brown, and wild species are even paler compared to those bred in hatcheries.

They sport a black lateral stripe that runs along the sides starting from the tip of their nose towards their tail. This black stripe is often broken. Black spotting may also occur along the back and on the tail fin of the fish.

There also exist several color morphs, such as albino, marble, and lecustic. Ironically, the Albino Chinese Algae Eater is a colorful one, which makes it the most popular choice, as it gives home aquariums a pop of color. Also known as the Golden Algae Eater, this species comes in vivid yellow color without the black lines or spots.

Chinese Algae Eaters have underslung mouths with pronounced lips, which the fish use to moor themselves to rocks. With their sucker-like mouths, the fish can stay stationary in fast-flowing waters.

More impressively, Chinese Algae Eaters can breathe without opening their mouths, as these fish have gills with two branchial arches.

This rare physiological trait allows water to enter through one gill and exit through the other. As such, the fish remain latched onto the surface while feeding, so they don’t get swept away by the current.

With proper care, the Chinese Algae Eater lifespan can reach 5 or even 10 years in captivity.

The Chinese Algae Eater goes by many nicknames, including Sucker Loach, Honey Sucker, and Biforated Carp. This species also goes by the name Indian Algae Eater, although the fish never really came from India!

The Siamese and Red Algae Eaters also patrol the bottom of the tank looking for algae. But unlike the Chinese Loach, these two eat a broader range of algae.

The Chinese Loach is a confirmed introvert. It doesn’t get on well with everyone and likes to mind its own business. For the most part, it will spend its time foraging around the bottom of the tank for food. You won’t get much entertainment value from this guy, but he is indeed a great help for keeping your tank clean.

As juveniles, Chinese Algae Eaters make excellent residents to a community aquarium because they pay no interest towards others. But as these fish mature, they can become territorial.

Chinese Algae Eaters can be aggressive, even towards their own. Keeping two would stir competition and cause the fish to harass each other. On the bright side, you may pull off a pair if you have a 125-gallon tank or larger. As long as the other fish stays out of the way, it is possible to keep the aggression at bay.

Yes, they could. Smaller or similar-sized bottom-dwelling species are likely to be viewed as competitors for food. Snails and other slow-moving tank mates are also likely to get picked on. Chinese Algae are also brave enough to latch themselves onto large, flat-bodied fish and eat the slime that covers their bodies.

That said, the most suitable companions for the Chinese Algae Eater are fast, swimming species and other peaceful fish that occupy the upper tier of the tank, such as:

Chinese Algae Eaters are a cinch to care for, provided that they always have clean and richly oxygenated water. But contrary to popular belief, algae is not their main source of nutrition.

In the wild, juveniles rasp onto stones and rocks to get their nutrients from algae and fouling. So, don’t be surprised to see your fish displaying the same behavior.

But as the Chinese Algae Feeder grows, they transition from algivore to omnivore. Adults prefer crustaceans, insect larvae, maggots, and other creatures small enough for them to swallow whole.

In that case, you should offer your fish a balanced diet to keep them in tip-top shape. Algae wafers and high-quality sinking pellets are the best staple food for these bottom-feeding omnivores.

Additionally, you’ll want to give your fish occasional servings of chopped fruits and blanched vegetables, such as:

Your fish will devour these food items with gusto once he has overcome the initial fear of a foreign object. Likewise, supplement their diet with protein in the form of live or frozen-dried brine shrimp, daphnia, and bloodworms.

The Chinese Algae Eater is a hardy and enduring species that can adapt to a wide range of water parameters. The ideal water hardness is between the 5 and 19 dGH range.

The most important requirement is the oxygen level of your tank. These fish also appreciate moderate to strong currents.

Perform 30% to 50% partial water changes at least once a month to keep ammonia and nitrites down. If the tank is densely populated, then you may need to do this more often.

As per usual, you’ll want to give your tank a good ole scrub to eliminate slime and mineral buildup on the walls. A standard or magnetic algae scraper would work well to keep the glass squeaky clean. On the other hand, your Chinese Loach will gladly deal with the algae on rocks and other hard-to-reach areas.

Chinese Algae Eaters can contract the same diseases that other tropical freshwater species get, with Ich as the most prevalent.

Ich is a parasitic protozoan that causes white spots to form across the fish’s body. In an attempt to get rid of the parasites, the infected fish will rub itself against the wall, substrate, and decor. Moderate to severe cases may cause behavioral changes, such as loss of appetite and lethargy.

It may surprise you, but fish can also get bloated. That is why you should not overfeed your pet. Another disadvantage is that your algae eater will stop cleaning your tank when it is always full. Adults, in particular, are notably less hardworking than young species.

As much as possible, you will need to replicate the natural environment of the Chinese Algae Eater to reduce stress and promote natural behaviors.

A 30-gallon tank is the suggested minimum for a juvenile Chinese Loach, but you will need to move your fish to a 55-gallon tank (208 liters) or larger when it reaches its mature size. A pair would easily need 125 gallons.

Their natural habitat is a mixture of stones, pebbles, sand, and gravel with sunken trees. To replicate this type of environment, use sand as the substrate and add slate and rock formations.

River rocks are an excellent choice. But before you add them to your tank, you’ll need to submerge them in hot water. A few minutes would be enough to kill harmful pathogens.

Since Chinese Algae Eaters don’t nibble on plants, you are free to include aquatic plants that benefit other species within the community tank. Better yet, grow moss on the rocks to enhance the natural feel of your aquarium.

To properly aerate your tank, you will need to use a powerhead, an airstone, or anything that produces ripples or bubbles in the water. Building a waterfall in your aquarium is also a fantastic way to increase the oxygen content of the water, as well as add aesthetic appeal. An undergravel filtration is also an excellent choice for your tank.

These fish inhabit sunlit rivers, so moderate to normal lighting is preferable. If possible, opt for diffused, filtered natural light. Take note; you should not expose your aquarium to direct sunlight, as it overheats the water and promotes the rapid growth of algae.

Chinese Algae Eaters are difficult to sex, and they are even harder to breed. Most stocks in pet shops come from hatcheries in which they use hormone-induced breeding practices. However, there have been a few reports of accidental breeding in ponds.

If you wish to mate Chinese Algae Eaters, you will need to house a large group in a pond and raise the water temperatures to trigger their natural breeding habits. Not to mention, you’ll need luck on your side!

Algae can easily get out of control in an aquarium, especially when your aquarium is densely stocked or when there is too much lighting. This makes an already difficult chore even more arduous. Thus, some hobbyists look for algae eaters to make the load easier.

The Chinese Algae Eater is one of the easiest fish to care for. Even beginners can keep them without much problem. But due to their potential aggressive behavior as adults, many people pass.

Besides, there are plenty of lower-maintenance algae eaters that don’t harass their tank mates. On the other hand, there are also a decent number of hobbyists who love these fish. 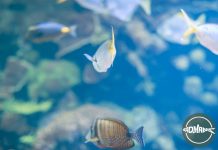 Cloudy Water After Water Change: Why It Happens and How To... 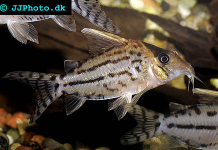 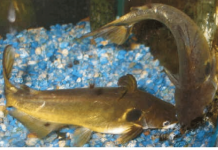 Sun Catfish: The Essentials of Handling this Species 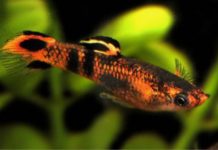 Swamp Guppy: Tips and Tricks on How to Take Care of...