The Clown Knife Fish has to be one of the strangest looking freshwater tropicals available in the hobby. With its elongated head, huge underslung jaw and humped back, it definitely doesn’t appeal to all. But for all its odd looks, these fish have great personalities and are amazing to watch gliding around the tank at night

The Clown Knife Fish is nocturnal, although they do sometimes come out during the day. They are quite remarkable to watch when they swim, as they are just as comfortable swimming backwards as they are going forwards, and they are amazingly flexible. When changing direction, they can turn within their own body length and often seem as though they have no backbone. Although they are very high through the body, they are very narrow widthways. This makes it possible for them to fit through very small spaces where most owners would think it was impossible for them to wriggle through.

They tend to be quite shy, skittish fish and can quite easily panic when surprised. Due to their generally poor eyesight, they rely on their lateral line, which is extremely sensitive, to detect changes in their surroundings and to hunt for their prey. When hunting, they like to approach small fish from behind, sneaking up very slowly, then pouncing and engulfing their prey whole in their enormous mouths. They can fit much larger fish that you would think into their mouths, so they cannot be considered safe in a community tank.

They are very hardy fish once they reach a certain size, but can be sensitive to water conditions and some medications when they are smaller than 9 or 10″. I have heard of many cases of young fish, 3 to 5″, dying soon after they are purchased due to shock or unsuitable tank conditions. 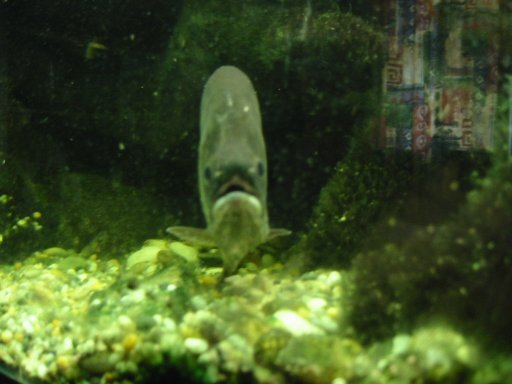 The first thing you need to think of when it comes to this fish is that it can reach an enormous size, even in the home aquarium. They are often offered for sale as small as 3″, and a lot of fish stores seem to forget to mention to the prospective owner that this cute little wiggler can reach lengths of up to 36″. They can be comfortable in a 55gal tank up to around 10″, but if you plan on having a clown knife long term, then you will need a tank that is an absolute minimum of 300 gallons, and bigger is always better.

Due to their nocturnal nature, they need a place to hide during the day, a piece of pipe or a cave where they can get away from the light. Without this, they can become stressed very easily and will try to fit themselves into any dark space they can find, often causing damage to themselves. They do better with open swimming space, but they are adept as negotiating obstacles such as plants and piles of rock. In the wild, they inhabit slow moving rivers and lakes in many areas of Asia, and do well in tanks set up similar to this type of environment.

They prefer a neutral pH and softer water, but larger fish can adapt to a higher pH and hard water. Mine lives comfortably at a pH of 8.2.

Clown Knife Fish are extremely picky eaters. In their natural habitat, they are exclusive piscavores, and this can become a problem in the home aquarium. If you start young enough, they can be trained to eat pellets and some frozen foods, but this cannot be guaranteed, so a supply of healthy live feeder fish is usually required.

This supply can consist of pretty much anything the fish can fit in its mouth, and mine has made a meal of goldfish, Buenos Aires tetras, Neon tetras, small Convicts and even Corydoras catfish. Some other foods that will sometimes be accepted are pieces of prawn, shellfish and some meaty foods such as beefheart, although animal proteins are not considered to be very healthy for them and should only be fed occasionally.

When young, these fish are comfortable in groups, but as they mature, they much prefer to live singly. Adult specimens will often not tolerate another Clown Knife or similar species in their tank. They also cannot be kept with smaller fish of any kind, as anything small enough to fit in their mouth will be considered as food and they will often take a snap at larger fish, just on the off chance they may get a meal out of it.

Clown Knifes tolerate large tankmates quite well, often ignoring attempts by territorial cichlids to chase them off. This can sometimes lead to problems with injuries being inflicted, although the clown will usually retreat to its hiding place before any major conflict occurs.

There is no known way to sex Clown Knife Fish, and breeding in home aquariums is currently unknown. Due to the size of the tank required to house two full grown clowns, attempting to breed this fish would be beyond the means of most aquarium keepers. 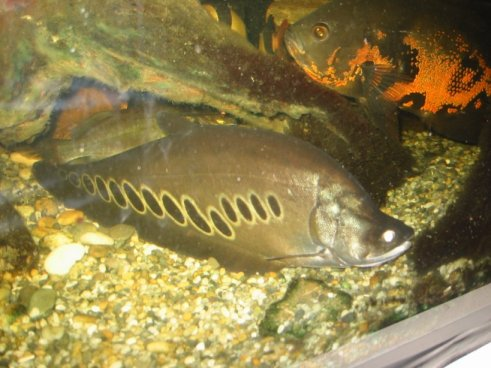 I have had a Clown Knife Fish for a little over two years now, and have seen it grow from 9″ to a healthy 18. For all their poor eyesight, mine does see well enough when the tank lights are low to recognise me and has developed quite a personality over time. He (I have no idea if it’s a male or a female, but I’ve always considered him to be male) is very responsive when you approach the tank at night, particularly when he thinks he’s going to be fed.

These fish are definitely not for beginners as they require a large commitment of time, money and space to keep happy and healthy, but they are well worth the effort, even if only for the “What on earth is that!?!?!” comments from people who see him for the first time. Clowns are truly amazing fish, with definite personalities and a lot of character, and a face only a mother could love!

Tropical Fish Profiles, covering the care and upkeep of many aquarium... 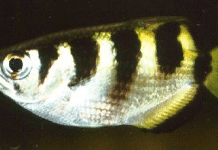 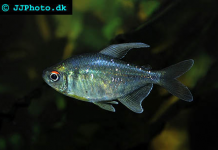