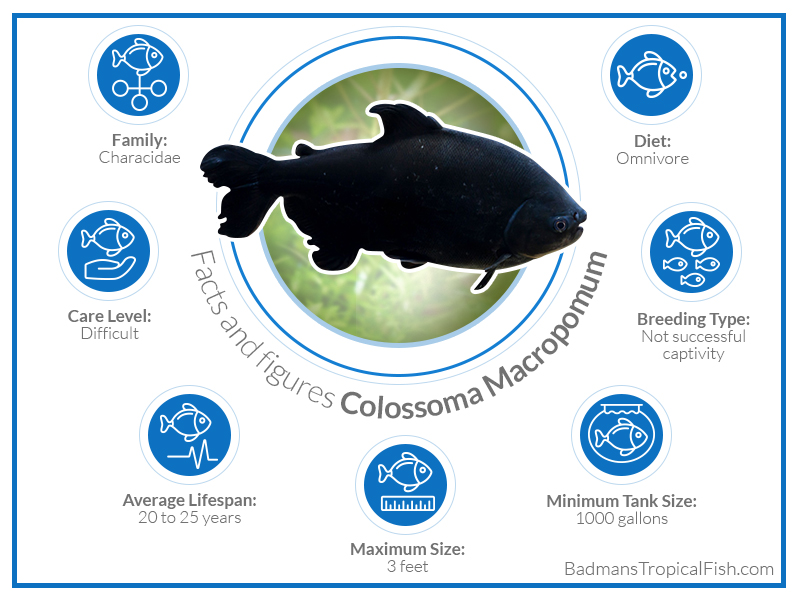 The Colossoma macropomum, also known as Black Pacu or Tambaqui is often offered for sale as the “cute and friendly vegetarian piranha.”

Due to this marketing deception, many fishkeepers have unfortunately abandoned their Black Pacus in rivers and public aquaria.

Are these fish aggressive and difficult to keep?

The Colossoma macropomum is a characid similar to the bright-colored tetras, but unlike its cousins, this species is far from being cute. Growing up to 42.5 inches (106 cm) in length and weighing up to 66 pounds (30 kg), it is the heaviest characid and the second-heaviest scaled freshwater fish in South America. 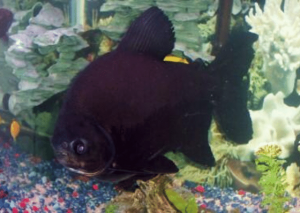 An adult Black Pacu features a laterally compressed body with a slight arch to the back. It has large eyes and a disproportionate mouth. Interestingly, the fish has amazing dentition and a powerful jaw, allowing it to crush fruit and nuts with ease. The teeth are cusped, resembling human molars.

The Colossoma macropomum also resembles the Piaractus brachypomus, except that the latter species has a pointed and less elongated head. Likewise, the Piaractus have a smaller adipose fin that lacks rays. The two species also differ in teeth and operculum.

The Black Pacu lifespan ranges between 20 to 25 years in an aquarium setting.

How Does the Black Pacu Differ from the Piranha?

The Colossoma macropomum is the only member of the genus Colossoma, and it belongs to the Serrasamilda family, the same as the piranha. Black Pacus closely resemble Piranhas when they are still about 2 to 3 inches small. As such, deceptive sellers market them as “vegetarian piranhas.”

But as the Black Pacu matures, the difference becomes more evident: 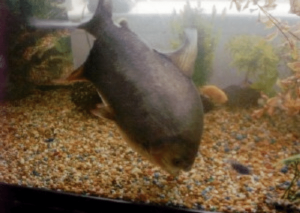 The Black Pacu hails from the Orinoco River and the Amazon Basin in Brazil, Colombia, Venezuela, Peru, and Bolivia. The fish prefers calm waters with overhanging and floating vegetation.

As the wet season arrives, the rivers rise and flood the Amazon forest for up to seven months. Schools of adult Black Pacus, along with other 200 omnivorous fish species, would migrate into the flooded forest to gorge and spawn.

Food is abundant and predatory interaction is minimal during this significant part of the year, thereby allowing young Black Pacus to thrive. 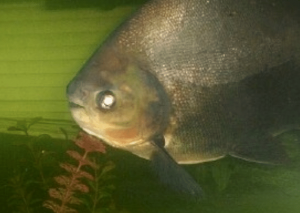 French naturalist Georges Cuvier described the Colossoma macropomum in 1816. Known as Tambaqui in its native place, it is an important food source for the indigenous people of the Amazon rainforest. The fish was later introduced to the Sepik River in 1994 and to the Ramu River in 1997.

The Tambaqui makes for a variety of palatable dishes, as its natural diet of fruits and seeds is said to enhance the flavor of its flesh. For this reason, the species has been introduced in Malaysia, Thailand, and Taiwan, among other Far Eastern countries.

Small populations also exist in various states of America as a result of releases by irresponsible fishkeepers. Sadly, the fish will not survive when the winter weather arrives. A more depressing scenario is gross overfishing in both the Central Amazon and lower Amazon regions. Young Tambaquis now comprise most of the catch.

How Does Tambaquis Contribute to the Ecosystem?

According to experts, the Tambaqui species play a vital role in the germination of various fruit trees similar to what birds do. A well-fed 22-pound Tambaqui can store up to 2.2 pounds of seeds in its gut, and most of these seeds are excreted undamaged. So, imagine what a larger fish could do!

Unfortunately, wild populations of Tambaquis are declining because of overfishing. Although restrictions have already been implemented to protect juvenile fish, fishermen continue to exploit the species. These people are either unaware of the consequences of their actions or have simply turned a blind eye.

On the bright side, Tambaquis are widely used in aquaculture projects in Brazil, Thailand, Hong Kong, and Singapore. Research is being conducted to determine the best way of farming the species.

The Colossoma macropomum might be resilient to disease and undemanding when it comes to food. However, they are not the best option for the novice aquarist for several reasons.

The Black Pacu is an omnivore that feeds on fruits, grains, seeds, and other plant matter. But if there is one food that drives this species nuts, it is the seeds of the Amazon rubber tree.

The sound of the seeds falling onto the water surface is music for the Black Pacu; they would flock and eat large amounts to store fat reserves. When food is scarce, the opportunistic fish would consume zooplankton, smaller fish, filamentous algae, and decaying plants.

In captivity, these fish will thrive with a varied diet consisting of Koi pellets, along with:

Black Pacus will eagerly eat anything offered to them. You may also include frozen foods, shrimps, worms, and insects as an occasional treat. If you can get your hands with rubber tree seeds, then that would be nice!

I am warning you, though. These fish love to eat, and since they are enormous, you will need to feed your pet several times a day.

Black Pacus can migrate between blackwater and whitewater streams in the Amazon without a problem. These fish are robust as they look, as they can even survive in oxygen-depleted waters for a certain period.

According to studies, the Colossoma macropomum does well with pH levels between 6.0 to 4.0 similar to what would occur in their native waters. These fish also prefer a water temperature between 78.8° and 82.4° F.

You will need a large, powerful filter for this gigantic fish. An excellent strategy is to choose a sump-type arrangement. You need to save as much space as possible and keep the equipment safe. A fish of this size can easily destroy a thermometer, air hose, etc.

That said, you also need to make sure your tank is made of thick, tempered glass to ensure it withstands the weight of the water, substrate, and rocks. Black Pacus are particularly known for bumping against the walls when spooked.

Decorations, on the other hand, are not as important as the size of the tank and the filter system used. A sprightly fish, such as the Black Pacu, will need as much swimming room as it could get. Unless your Black Pacu is sharing space with other fish, then there is also little point in adding many plants. Opt for driftwood and beech branches.

Albeit a peaceful species, they can inflict a really nasty bite. So, take care when cleaning the tank.

The Colossoma macropomum is a highly disease-resistant species. However, the fish may develop a white, slimy film over their eyes if the water is unchanged for a few months. Fortunately, a quick change in water resolves this problem.

If you are keeping your Black Pacu in a community tank, you need to do 30% to 50% water change bi-weekly to keep the bioload down. Otherwise, the ammonia and nitrate levels will shoot up and cause illness to other species.

Keeping a Black Pacu in a home aquarium is actually a matter of debate. The fact that it is the second-largest species of scaled fish in the Amazon Basin is something you should not overlook.

What is the Recommended Tank Size for a Black Pacu?

Obviously, a fish that can grow as big as a Beagle will need a 1000-gallon capacity tank (3, 785 liters) that is around 40 inches long (101.6 cm). You can keep a youngster in a smaller tank with other species, but the fish will quickly outgrow it.

While the Black Pacu might rarely reach its maximum size in captivity, it will still grow to a couple of feet in length. The largest Black Pacu recorded in a home aquarium topped 40 inches (1 m/100 cm) in length and weighed more than 20 kg (44 lbs).

To complicate matters, there is a common misconception that a small tank can stunt its growth. Thus, people are misled into believing it is okay to house a group of Black Pacus in a standard-sized tank. However, this is not the case with this Amazonian fish.

Be warned; you will have a lot of water changes with a tank that large. And if you are ambitious enough to take care of a pair, then you will definitely need a much bigger tank and professional aquarium services.

Should I Keep Black Pacus in an Indoor Pond?

Some people suggest keeping Black Pacus in heated indoor ponds, instead. While that might be feasible, the downside is that you won’t be able to see much of your pets, especially with their dark color.

No. Although the Black Pacu is a close relative of the Piranha, this species is not an aggressive predator. The Black Pacu is a shoaling fish when juvenile, although the youngsters can have small skirmishes here and there when kept in constrictive quarters. As the fish matures, they become more solitary.

Can You Keep Black Pacu in a Community Tank?

Yes, of course! The Black Pacu is a fantastic addition to your community aquarium, granted that you have an enormous tank to accommodate an array of non-aggressive species.

The Tambaqui compatibility is quite limited due to the fact that these fish can grow to a mammoth size that they will start eating any fish small enough to enter its mouth. Apart from their size, their constant activity also bothers shy companions.

Black Pacus spawn during the beginning of the high water season. Spawning first occurs in whitewater rivers. Hatchlings and immature fish enter floodplain forests and lakes of the Amazon region.

The schooling juveniles feed carnivorously on zooplankton, while the solitary adults swim further into the flooded forests to feed on submerged plants, seeds, and fruits.

The species has not been successfully bred in home aquariums presumably because these fish are difficult to keep together due to their enormous size. But as a fishery specimen, the Fish Culture Station in Brazil has successfully bred the species through the use of hormones.

Black Pacus might be a characid, but their needs are nothing like the average tetra. Due to their mammoth size, you should only care for these fish if you have the financial capability.

If you are willing to go to great lengths, then here is a wrap up for you:

Lastly, do not forget that the Black Pacu can live over 20 years when well taken care of by its owner. Are you ready for that commitment? That will require a lot of tank cleanings! 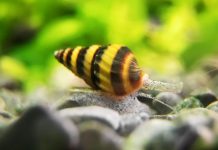 Assassin Snail: Learn Everything About This Interesting Gastropod 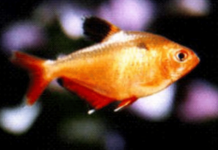 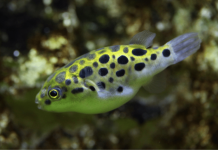