Fishless cycling is man’s safest approach to keeping an aquarium-raised fish healthy. In the wild, natural phenomena in the ecosystem like rainfall or soil bacteria tackle excess ammonia. However, the fishless cycle helps an aquarist grow a healthy amount of bacteria to eliminate toxins present in the aquarium.

This article explains the science behind the fishless cycle, how to do it with no prior experience, and its various benefits.

The waste from a fish or decayed food generates ammonia which is not beneficial to the fish. It makes them sick and prone to different outbreaks. The nitrogen cycle is the ecosystem’s way of preventing the fishes from killing themselves with their waste.

It transforms the toxic compounds into non-toxic ones. However, in a fish tank where natural phenomena have no direct influence, you have to simulate them artificially. That is what a fishless cycle is; it is a technique of growing your colony of bacteria to make the aquarium water safe.

After the waste generates ammonia, a special kind of bacteria feeds on it called the Nitrosomonas. The Nitrosomonas further creates its waste called Nitrite. Quite sadly, this Nitrite is highly poisonous to the tank inhabitants. Its aftermaths are like that of ammonia, and it causes a burning sensation on the gills of the fish. In worse situations, it produces a fatal outcome.

In a healthy tank containing good bacteria like Nitrobacter, they, in turn, eat up the nitrites. And once again, they also give off their waste; it is called Nitrate. However, Nitrates are safe for the fish, but only if they are not in large quantities. That’s where the benefits of frequent water changes come into play.

If your tank can allow all these conversions and maintain the nitrate levels at 20 parts per million in the aquarium, your fish would be healthy. Finally, aquarium plants play considerable roles in purifying aquarium water. They feed on the nitrates in the water during photosynthesis and produce their waste. Luckily, their waste is oxygen; it oxygenates the aquarium water, thereby helping the tank inhabitant improve their breathing.

How To Do a Fishless Cycle

You can perform the fishless cycle with ammonia by introducing it into the aquarium water using five different methods: 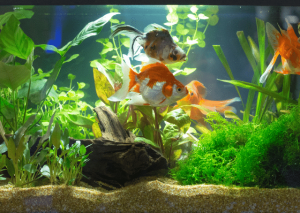 Rotten food generates ammonia. Add the regular portion of food that you would need to feed your pet daily. In no time, it would begin to rot in the tank water and creates ammonia. Once ammonia is present, Nitrosomonas would start to grow in small quantities and eventually produce significant waste called Nitrobacter.

Alternatively, use a mesh cloth and place fish food in it. The fabric helps hold the food in one place, so it’s easier to take out once the process starts.

Prawn-like fish food decays to give off ammonia. Put it in a piece of mesh fabric or place it close to the filter in the aquarium.

Household ammonia is accessible in stores or pharmacies. However, they are not as concentrated as you need them to be. Read the labeling on the bottle to get their percentage and calculate how much you need to add.

Use the dosing pipette to take out a regulated amount of ammonia. Do not put the container close to your nose or inhale the ammonia because it gives your eyes and nose a burning sensation.

The fishless cycle is rampant these days, so different stores now bottle up ammonia to sell to aquarists with new tanks. They can be helpful as they save you some days for generating your own from scratch.

The mature media starts an instant nitrogen cycle. It is a very effective and wise move as it saves you time. It is common, particularly if you are expanding from a small aquarium to a bigger space. To use this method, remove the mature media present in the filter from your smaller tank and place it into the big one.

The concept is, the same amount of fish would still produce the same quantity of waste. So the existing bacteria in the filter would convert the toxins to non- toxins instantly. However, it would not play out that way in some cases, so you have to regulate and control the ammonia levels.

If your new tank requires a new filter, take out tiny portions from the mature media and introduce it into the tank weekly for a while. Soon the new filter would grow its media. However, run tests frequently to be sure everything is fine. The media you are putting into the tank is not having adverse effects. 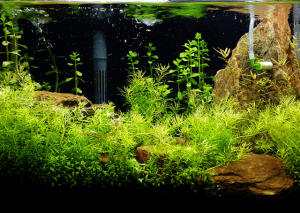 You have decided on which ammonia source is good for you. Now check the GH, PH, and KH levels; it’s good you know the readings at every stage of the cycle. Also, if your water source is tap water, it is crucial to know that it has a Nitrate percentage. That is why readings and tests records are essential; they show you if there is an improvement.

You can take the PH reading by collecting the tap water sample and keeping it 24 hours before the test. It produces a correct PH reading this way.

Put your ammonia source into the tank and take a test to confirm it is enough. If you are generating ammonia through a food source, it will take a few days to decay.

Test when you begin to see signs of rot and be sure it is enough or if you would need to add more food sources. Be patient during this process as it may take some time to generate about two parts per million of ammonia.

Take daily reports of GH, PH, and KH levels, check that they do not drop.

After one week, the ammonia levels should begin to drop as the nitrite levels rise. It may take longer than two weeks in some cases but continue daily tests. As the ammonia drops, keep adding your ammonia source, so it rises and increases the production of bacteria and eventually Nitrites.

In three weeks, the ammonia levels should be low at this point, so keep adding the ammonia source. The more ammonia, the more rapidly Nitrite grows in the water.

At about week four to week six, begin to test for nitrate levels. Nitrates indicate the cycle is almost ended. Ammonia levels and Nitrites reading should be at zero after 24 hours of introducing 2ppm ammonia to the tank. Next, test the GH, PH, and KH levels.

The nitrate level has increased.

If your fishless cycle is not similar to the stages listed above, it can mean these;

Raise the KH and PH levels by adding bicarbonate of soda. It is available in the cooking aisle of a supermarket. It is not the same as baking powder. Take the PH reading and add more if needed.

In a soft water tank, the KH reading may drop rapidly. Check it frequently during the cycle and raise it so it becomes stabilized. The KH levels affect the PH levels. When it reduces, particularly with the fishes in the aquarium, it can rapidly increase the water’s acidity. In worse cases, all the tank inhabitants would die off in a short time.

For high levels of nitrates, perform water changes of half the content of the aquarium two times. Also, use a water conditioner to get rid of the chlorine present in the tap water.

Regulate the water temperature during the changes; you can add boiled water to the tank if necessary. You have to run the water changes consecutively at 50 percent first and 50 percent afterward. It helps you flush out the poor water condition without disturbing the bacteria strains.

At this point, your cycle is complete, and it is time to add your fish to their new home. You can add them in phases or together.

If you are not ready to add in the tank inhabitants, keep the ammonia levels up, so the bacteria strains do not die. Then change the water when you are ready. Remember 50 percent consecutively to get rid of Nitrates.

The Benefit of the Fishless Cycle

Fishless cycling in your aquarium helps grow the two bacteria (that tackles ammonia and converts it to nitrates). The strains are called Nitrosomonas and Nitrobacter.

Furthermore, it can significantly reduce the fatality of fishes by reducing the harmful chemical compounds in aquariums. The losses are widespread amongst new enthusiasts interested in growing their hobbies but do not understand the need for a fishless cycle. It gives them a promising beginning.

The fishless cycling saves you the trouble of exposing the fish to harsh conditions. Cycling your aquarium without fish makes them less inclined to lots of disease outbreaks nor hurts the fish. Once the cycle is completed, you can stock your fish, particularly in large tanks, to introduce the fish in sets.

The fishless cycle increases the process faster. However, in situations where the tanks’ inhabitants are cichlids and other aggressive fishes, adding the fish in batches becomes a disadvantage. This is because the later fish sets will be harassed by the cichlids present in the tank. But if you put them all simultaneously, the ammonia levels would be too high and stop the cycle.

A fishless cycle is essential to help you “break in” your new tank. In some cases, the process starts on its own but only as a survival tactic. Make sure to try the steps we mentioned above when you start a fishless cycle to enjoy a seamless and non-agitating process. 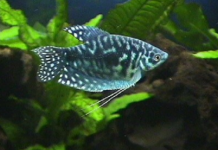 So you’re considering getting an algae-eater for your aquarium, Article 48... 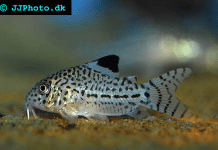 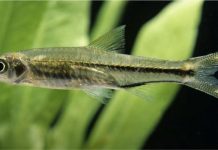