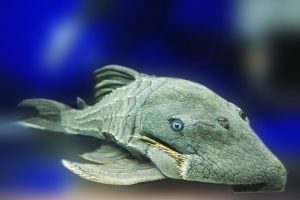 The Green Phantom Pleco (L200) is a voracious algae-eating loricariid native to the Orinoco, in South America. It’s popular with fishkeepers the world over, thanks to its solitary temperament and tank-cleaning characteristics.

But there’s more to this Pleco than meets the eye. That’s why aquarists looking to get one for their home tanks will want to go through our care guide. The article will focus on upkeep specifics and stats to ensure you know exactly where you stand with this species.

The Green Phantom Pleco (aka Hemiancistrus Subviridis) belongs to a genus of suckermouth armored catfish. The species made its appearance in 1995 and quickly rose to fame thanks to its vivid green hues.

However, much about this species’ origins remains a mystery. We know these fish native to the river Orinoco (located in Venezuela and Colombia), but they’re easy enough to confuse with other Loricariid family members.

Then there’s the fact that the L200 classification can sometimes include the “High Fin Green Phantom Pleco.” HiFins are almost identical to the standard L200s except for a more defined, almost shark-like dorsal fin. However, aquarists should note that L200 HiFin (Baryancistrus Demantoides) and the Hemiancistrus Subviridis are two distinct fish species despite the similarity in physical attributes.

While the Hemiancistrus genus isn’t the most well-defined taxonomic group, you’ll be happy to learn that there’s still enough information about the Phantom Plec’s appearance and behavior to help hobbyists understand the species better.

If you’re not a Latin expert (who is nowadays?), you won’t notice the nod to the Phantom Plec’s coloring in the term “Hemiancistrus Subviridis.” But that doesn’t make much of a difference because with a name like “Green Phantom Pleco,” aquarists are pretty sure of the color of these Plecos.

Much like all other specimens of the Loricariid family, Phantom Plecos have bony plates on their bodies. The species’ bodies are narrow compared to their heads.

They have ventrally-oriented mouths placed under the head to help them scavenge for food near the substrate and suck up algae.

Despite not varying much from the color green, the species are available in different shades of green, such as blueish-green to yellowish-green. Phantom Plecos also have creamy spots around the top of their heads, slightly-yellow fins, and a shark-like dorsal fin.

Phantom Plecs classify as bottom-dwellers and cave-dwellers. That means they tend to mind their own business and are solitary fish.

Nonetheless, the Phantoms Plecs can make suitable additions to community tanks, as long as you make sure it’s the only bottom-dweller in the aquarium.

You’ll likely be able to find your Phantom Pleco flitting around the bottom of your tank as it sucks up algae. Despite their love of caves, they’re pretty active, so you don’t have to worry about them disappearing once they’re inside the tank.

As a rule, Plecos are a hardy species that are quite forgiving regarding the care they require. However, the species can be susceptible to diseases if not looked after properly, and that’s where this comprehensive care section can help you.

Phantom Plecos classify as medium-sized Plecos and, for that reason, the minimum requirement for Green Phantom Pleco Tank Size is 30 gallons. More often than not, aquarists will pick out Plecos as members of a community tank because they’re bottom-dwellers and tend to keep to their space of the tank.

If you’re planning to keep a pair of Phantom Plecs, it’s best to stick to a spacious tank that allows for a suitable habitat for this species.

As cave-dwellers, Green Plecos prefer a setting with plenty of hiding places. A tank with more than one Pleco and not enough caves can spell trouble for fish owners, because the adult males don’t like anyone straying too close to their territory.

Similarly, Phantom Plecos in tanks will do well with a temperature range of 72 to 77 degrees F and pH levels of 6.0 to 7.8. Additionally, water hardness levels for this species measure between 4 to 17 dH.

First-time aquarists will do well to have a water-testing kit on hand to track any changes in the tank’s water conditions. Other essential items for optimal water conditions are air stones and circulation pumps. Air stones will help keep up the oxygen levels in your tank and will also contribute to superior water quality.

On the other hand, a circulation pump will provide good water movement to make your Green Plecos feel right at home.

Keep two things in mind when you’re trying to recreate the Phantom Pleco’s natural habitat in your home tank. One, this species is made of bottom-dwellers who like swimming and scavenging near the substrate. And two, Green plecos love resting on rounded boulders (or other smooth rock structures) and driftwood.

Overall, the ideal habitat for this Pleco species includes a mixture of sandy substrate along with smooth medium-sized gravel, driftwood structures, rock structures, and terracotta or PVC pipes.

Phantom Plecos don’t particularly require the presence of underwater plants because they’re cave-spawners. Not to mention, this species is known to eat certain types of plants.

Another detail to keep in mind when picking out substrate or tank decorations is to avoid placing anything in the tank with jagged or sharp edges. Phantom Plecos have soft undersides that could suffer cuts or injuries by rubbing against such objects.

Unlike Tiger Plecos, Green Phantom Plecos are big algae-eaters. But that doesn’t mean that sucking up the algae in the fish tank will provide these green catfish with the sustenance they need.

Thankfully, Phantom Plecos are pretty easy-going about what they eat. And they’re omnivores — which means fish parents can feed them anything from high-quality pellets, wafers, live food, frozen food, vegetables like cucumbers, etc.

Aquarists should note, however, that a varied fish diet works best for plecos.

It’s also a good idea to treat your Plecos to frozen or live food occasionally. The bulk of your Phantom Pleco’s diet should consist of pellets because these are formulated to meet all the dietary needs of your pet.

The lifespan, size and growth rate of a fish species are important stats for aquarists. That’s why we’ve compiled them all under one heading, along with the health conditions Green Phantom Plecos may be vulnerable to.

Phantom Plecos have an average life expectancy of 10 to 12 years. However, these lifespan numbers are based on ideal water and tank conditions, without any disease incidence.

Green Phantom Plecos fall into the small-to-medium armored suckermouth category. The species is slow-growing, which means fishkeepers can start with a smaller tank and upgrade to 30 gallons as the Pleco reaches maturity.

The Green Phantom Pleco max size ranges between 6 to 8 inches. Juveniles can be purchased in different sizes. For example, you have the option of buying juvies measuring 2 inches to 4.5 inches, depending on your preference.

The species tends to grow slowly, so your Pleco may take several years to reach maximum size, based on how big the juveniles you purchase are.

Plecos are a hardy group of fish. They’re also easy to care for and are considered suitable for beginner-level fishkeepers. However, despite their robust character, Green Phantom Plecos are susceptible to diseases common among freshwater fish.

For instance, Phantom Plecos can fall prey to fin rot, Ich, and other types of viral or bacterial infections.

You should note that most illnesses common among this species are related to sub-par water quality conditions. It’s essential to ensure these fish have optimal water conditions in the fish tank, along with appropriate oxygenation.

Surprisingly enough, Phantom Plecos are also easily damaged. Despite the solid bony plates of the Pleco anatomy, these fish are remarkably easy to bruise. Once their skin is damaged, microbes within the water can enter their systems and wreak havoc. Be extra careful when handling this species. Capture and release them gently if changing tanks.

Green Phantom Plecos are egg-layers and cave-spawners. The species can be bred in captivity, but a separate breeding tank is required. The habitat of the breeding tank should include a sandy substrate with smooth rock structures that provide narrow caves.

Once the breeding process begins, the male Phantom Plec will guard the cave where the female is spawning.

Female Green Phantom Plecs can lay approximately 40 eggs in one go. Once the female has laid the eggs, you can remove it from the breeding tank. The male, on the other hand, will continue to guard the cave until the eggs hatch.

The fry will continue to gain sustenance from their egg-sacs for about six days after hatching. Once they start moving about the tank, you can feed the fry baby brine shrimps.

You always have the option of keeping the Plecos in a single-species tank, but if you’re planning on adding other species, make sure to get mid and top-dwelling fish to avoid disagreements.

Green Phantom Plecos are suitable fish for beginner-level hobbyists planning on keeping a single-species or community tank. However, the species does have certain care requirements prospective fish parents need to be aware of. Here’s what the essential ones are.

We’re at the end of our care guide and hope Green Phantom Pleco enthusiasts have amassed enough info to get started on that Pleco tank they’ve been planning. Remember to pay special attention to the species’ diet and water conditions. Besides that, we’re sure you’ll do just fine! 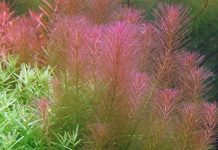 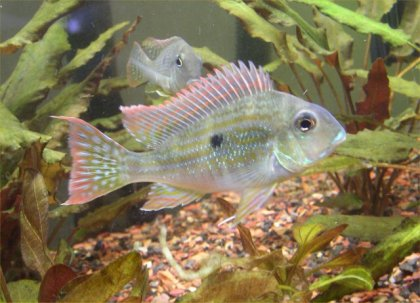 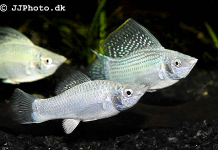