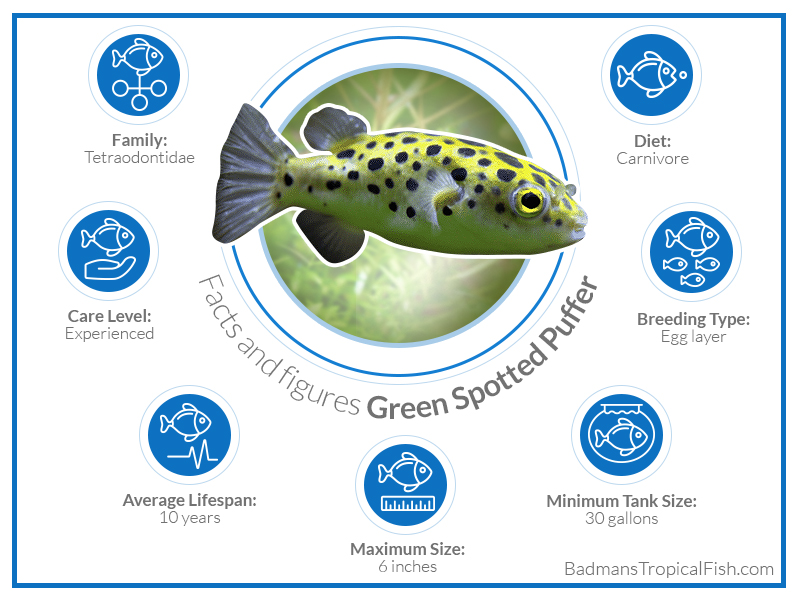 If you are a relatively experienced fish enthusiast, the Green Spotted Puffer, also known as Dichotomyctere nigroviridis, should be the next on your radar. This East Asian tropical native is often misunderstood to be just a fish that blows and looks cute. It is much more than that.

In this article, along with tips and tricks for its maintenance, we will find out why.

The biological taxonomic classification of fish is just as crucial to aquarium enthusiasts as the dog breed is to their daddies.

Let’s have a look at it:

Interesting Fact: The Green Puffers have the shortest genome sequence in the vertebrate world, making for an excellent lab rat (or fish if you will) in genetic testing. This is why this fish is routinely used in lab tests around the world.

The Spotted Puffer Fish is indigenous to the tropical East and South-East Asia. They live in fresh and brackish waters, residing in rivers, flooded plains, and mangroves aplenty. If you spread out a map and locate the Philippines and Indo-China, that is where you’ll find them.

While the name does give it away (a bit), there is much more to the Green Puffer than the caricature of a puffed-up ball-like fish that floats around. Once you’ve gone through the details below, you’ll know what an aggressive little bugger it is. 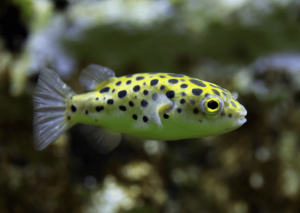 Fondly called Leopard Fish, this spotted vertebrate is more of an iguana, with colors varying with age and origin. The full grown Green Spotted Puffer has big, black or brown spots around the head. Smaller spots are also found elsewhere on the body.

Under those spots, the general color tone is an enticing Emerald Green (the shining ocean water color that you, sometimes, see). The contrast makes for a striking visual and wins the hearts of many first-time fish owners. One thing to keep in mind is that the young freshwater spotted puffer fish aren’t that strikingly colorful from the outset. Good stuff for those who wait, right?

An easy way to describe them is to think of a flat golf club head with protruding eyes on the sides. This peculiar look is accentuated by the presence of a somewhat strong jaw and four teeth-like structures. It has no ventral or pelvic fins.

The caudal fin is like a fan. The pectoral fins do the lion’s share of the work and propel the whole body forward or backward at incredible speeds. Small spikes cover the leathery skin.

True to its name, the Pufferfish swells up when frightened or endangered. While that may look cool, it is pretty dangerous for the fish itself. You shouldn’t, at any cost, trigger a stressful situation that makes it do so. It may be amusing to you, but it is, in many instances, fatal to the fish.

Pufferfish grow to about 6 inches. While that isn’t humongous, their aggressive nature, discussed in the section below, makes them more than a match for their size. So, make sure you’re okay with a feisty fish if you’re getting a green spotted puffer.

On average, green spotted puffer lifespan, under optimum conditions, is 10 years. Some even survive into 15 years. However, substandard care can cause them to die prematurely. Nevertheless, you can expect a long era of camaraderie with the feisty, little one.

Well, that may be the case. It is pretty taxing to care for it, and unless you aren’t ready to go the extra mile, you will do better to avoid it. 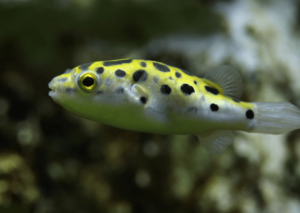 Unlike other commonplace fishes, the Green Puffer cannot simply be chucked into a fishbowl and left to sit there with an occasional clean-up. Such a cavalier attitude towards its care, usually seen in first-time puffer pets, often leads to death.

It would help if you kept an eye out for quite a few parameters:

Natural additions to the aquarium don’t last long (thanks to our perennially hungry friend). It is advisable to add gravel, crushed coral, and some additional artificial structures.

Green Spotted Puffers are meat-eating carnivores. These beastly individuals are, for all practical purposes, eating machines. They can eat themselves to death. That is why it is better to feed them in small quantities. While they eat flake, frozen, and fresh foods, they prefer the latter by a considerable degree.

Their diet is primarily made of crustaceans. You can feed them clams, crayfish, lobsters, and squid, among other things. The most important part of their diet are snails (that are the size of their eyes). These snails help to wear down the beak-like teeth and keep them down to a particular size. If not for these little ones, the fishes would die.

Younger fish should be fed plankton, krill, whitebait, brine-shrimp, ghost-shrimp, and also snails. As they grow longer than 4 inches, mussels, scallops, crab legs, oysters, and lobsters can be added to the diet. You will also notice that while the young fish can eat all the time, it is better to hold back a bit when it comes to the adults.

An alternate day eating schedule should be your modus operandi. Before feeding them, you should thaw the food in some tank water. Another good idea is to offer them live ghost shrimp to chase after and feast on. Being notorious predators, the Green Puffer will love it. You should also be careful not to leave any uneaten food which can pollute the tank.

Most of the Green Puffer fishes are caught in the wild (breeding in captivity is nearly impossible, see the section below). As a result, most of them carry parasites. It is, thence, a good practice to quarantine them before a full-fledged entry to your aquarium.

An excellent way to tell the healthy from the diseased is to look at the stomach. It should be white and sunken. However, if it is greyish and round, there is cause for concern.

Similarly, being an energetic fish, the puffer should be actively swimming and react to your closely approaching it. A lethargic fish is something that you should steer clear of.

You also have to be careful about transporting it. It is better to move it in a bag as opposed to a net. As this is a stress-inducing event, it is liable to puff up, and puffing up in open air can be fatal.

We have mentioned how essential the snails are to the fish’s life and well-being. A good idea for long-term maintenance is to grow your own. It is not that difficult. All that is needed is a 10-gallon tank, some essential lighting, a bit of substrate to subsist on, and you’re ready to go.

Getting the snails to breed is also relatively easy. Just introduce a few of them to the tank and, in a few weeks, you’ll have nurseries of little ones. They can eat virtually anything.

However, to provide adequate nutrition to your fish, they need to be fed veggies and algae.

While even poor tank maintenance wouldn’t kill many of them, you want to feed your Green Pufferfish the healthiest of snails. Partially change the water every week and keep them on a steady diet, and you’ll have a snail harvest to boast about.

You may want to have an aquarium with multiple fish species, big and small, with different colors, swimming about looking like an underwater rainbow. That dream will have to wait or, at least, need a different fish tank. That’s because of the Green Puffer’s ferocity and bloodthirst. If that sounds like the description of a medieval ward lord, that is because it is.

The puffer will eat any other organism in the tank, be it other fishes or insects. You may think that keeping it with one of its own would keep its bloodlust at bay, but you’d be wrong. It even eats other pufferfish. Sometimes, they can even get along with other pufferfish for a while only to suddenly eat it at the first sign of weakness.

If the other fish could talk, they’d be screaming at the top of their lungs when you put them in with a Green Puffer. They are killers, and that is all there is to say about that.

However, as with other things, there are occasional exceptions to the rule. You can try to put them in with bumblebees, mollies, archerfish, scats, and other Green Spotted Pufferfish. If they get eaten, know that we told you so.

Like everything else about this fish, breeding them isn’t easy either. Let’s find out the reasons.

While you may consider yourself a fan who knows quite a bit about this fish, even experts have difficulty differentiating between this species’ male and female individuals. With that as only the first stumbling block, you can imagine what a blast breeding them must be.

It is rare to hear about any successful breeding attempt. Most fish in captivity spend their life in solitude without ever reproducing. These ferocious predators aren’t as promiscuous as one would expect them to be. A strategy to get around the sex identification problem is to add five or more individuals to the tank. That raises the chances of one being a female.

Once the female is impregnated for the first time, it is easily distinguished by the growth in its size. That recognition will also augment future breeding attempts. For those to be successful, perfect spawning conditions should be provided.

They are listed as follows:

Up until now, you may have gathered the impression that this fish is merely a meat-eating barbarian. While that is true, there is another side to this enigmatic organism.

Interestingly, it is also among the most intelligent fishes out there.

It can recognize its owner and shows excitement on the appearance of a familiar face. While that may not seem like much, such demonstrable intellect isn’t evident in pets until you climb up (biologically speaking) to dogs. You can form a real relationship with them that endures over their long lifetime.

While these have been mentioned elsewhere in the article, we, to thank you for your patience, are listing them together one more time:

In this section, we will summarize the upsides and downsides of owning the Green Spotted Pufferfish.

Here are the best things about it:

Here are, well, some of the downsides that you are going to have to deal with.

This article covered nearly everything to know about keeping and caring for Green Spotted Puffer fishes.

The following is a quick review of it:

Notwithstanding the problems, it can be an excellent companion. If you have your heart set on it, go for it, by all means. Swim easy! 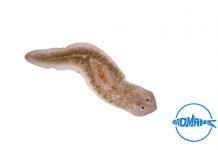 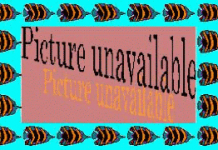 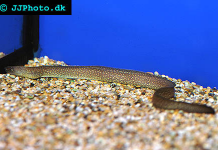