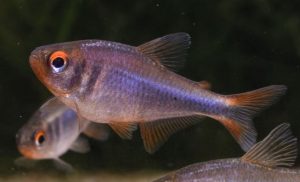 Hyphessobrycon wadai, also known as blueberry tetra, is an aquarium trade popular species of Hyphessobrycon Durbin. These are some stunningly beautiful fish with an exuberant blue-purple body and red fins.

This fish is a fairly new tetra that was described only in 2016. But even then, they have already taken Brazilian fishkeepers by storm. Who wouldn’t want to own such a rare and beautiful species of fish?

The etymology of Hyphessobrycon wadai is primarily Greek. Hyphesson is a Greek word meaning “a little smaller,” and brycon comes from the Greek word bryko, which means “to bite.” Quite a fitting name indeed.

The Wadai is named after Luiz Wada in tribute to his contribution to many scientific types of research with fishes. He is a highly respected ornamental fish breeder as well as an enthusiastic aquarist.

Blueberry tetra is the more common name for these fish and also the name most popularly used in the aquarium trade. Aquarists named it so because of the beautiful purple coloration on their bodies in life.

Since these fish are easy to take care of, you will have no problem raising them, even if you’re a freshwater fish beginner.

Hyphessobrycon wadai’s natural distribution is in the freshwaters of South America. They’re seen in the tributaries of the Rio do Sangue, affluent of the Rio Juruena drainage, which lies in the tropical upper Rio Tapajós Basin at the Mato Grosso state of Brazil.

Their location is usually in clear water streams with moderate to rapid water currents. Since they are benthopelagic fish, they mainly reside in the area running over a sand bottom. Now they are widely raised as aquarium fish.

Though they’re shaped more or less like other Tetras, their coloration has a unique characteristic. When the males reach maturity, they pulse with the most brilliant blue, purple, and crimson tones.

Since we’re on the topic of colors, there is something you should always be careful of when buying a blueberry tetra.

There is a popular and more widely available tetra called the White Skirt Tetra. The scientific name of it is Gymnocorymbus ternetzi. A common scam that many dishonest people engage in is fish dyeing. This scam is basically coloring common fish to make them look like rarer and more expensive fish.

Needless to say, this is completely illegal. Not to mention it’s very harmful to the fish as well. Because of this, many White Skirt Tetras die frequently.

Blue dye is injected into them through a syringe to make them look like blueberry tetras. So when you go to buy one, make sure that the tetra is not dyed because you will be purchasing an inexpensive white tetra with the high price of a blueberry tetra.

Unfortunately, this is one of the reasons why many people discourage buying blueberry tetras and other rarer species. The more people buy it, the more these illegal and immoral practices occur.

Like most other Tetras, a Hyphessobrycon wadai or blueberry tetra will typically live for three to five years. It can be more if you’ve taken the utmost care for the fish and it has grown healthy. Good water quality and good food quality will help your fish live well.

It is possible to distinguish Hyphessobrycon wadai from other congeners. First of all, these fish have a single humeral blotch but no distinct caudal-peduncle bloth.

The care level for your blueberry tetra is on the beginner’s side. Which means they’re very easy to care for. They’ll do just fine in normal aquarium parameters. You won’t have to take any additional measures separately for them.

Like most other fish, blueberry tetras prefer to live in groups with fellow blueberry tetras. If you don’t want yours to be lonely, it’s best to buy more than one at once.

The bigger the group is, the happier your fish will be. In fact, aquarium-keepers have noticed that in a big group, the behavior of blueberry tetras is more interesting.

If your blueberry tetra is diagnosed with a freshwater fish disease, then make sure to put them in the quarantine tank. If you use any kind of medication on your fish, don’t forget to remove any carbon from your filtration system.

If you don’t do that, the carbon will remove any kind of medication from the water. Moreover, make sure to read the medicine bottle very carefully. You don’t want to make any careless mistake that will worsen the health of your fish.

From the presence of allochthonous and autochthonous items in their stomach, researchers could guess their diets. These items were composed of filamentous algae and organic debris.

There was also the presence of unidentified insect larvae, fragments of terrestrial adult insects, and some other arthropods. All of these will constitute the diet of a standard Hyphessobrycon wadai.

Fortunately, they are peaceful omnivores. So if you want to raise them, you can feed them standard aquarium foods. They will have no problem consuming those types of food. It is best to give them vitamin-enriched flakes, and occasionally some frozen foods will be good too.

Brine shrimp is the favorite of many tetras, and blueberry tetras are no exception either. Moreover, something interesting happens when you give them live food. They turn into a gorgeous light red color and, of course, become more active. 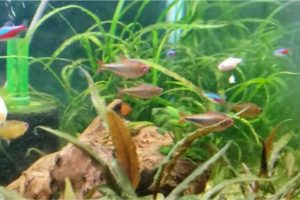 The water parameter of your tank can range from acidic to alkaline and from hard to soft. However, it’s best to try to match it with the water conditions of the supplier. That way, your fish won’t have to go through a stage of adaptation.

If you keep them at colder temperatures than that, they might end up developing ich. The tank size should be at least 10 gallons, but 20 gallons (144 liters), 1.52 to 2 feet, is ideal.

Plants are not absolutely necessary for these tetras. But fishkeepers have said that these guys do great in planted tanks. Not to mention they will look so much prettier in them as well.

Like all new fish, we advise you to first keep your blueberry tetras in a small quarantine tank. Keep them there for a few days and observe their temperament, behavior, and other things.

Once you’re sure everything is okay, you can put them in the main tank with the other fish. Blueberry tetras will appreciate fellow blueberry tetras as their tank mates. In fact, they’re known to be so friendly with each other that they’re always chasing each other around the tank.

However, blueberry tetras will never bother other fish. Don’t worry; other fish shouldn’t be of any harm to them. Blueberry tetras prefer to play around with each other but not with different types of fish. Just make sure not to put them in the same tank as the aggressive fish and the comparatively much bigger fish.

Your blueberry tetras will mostly swim in the middle of the tank. You won’t generally find them dwelling in the bottom of the tank or the top.

The breeding system of Hyphessobrycon wadai is the same as most other tetras. Like most tetras, blueberry tetras’ eggs scatter. Make sure your tank has a hiding place so that the fish feel comfortable with breeding.

Make sure you change the water enough times. For normal home tanks, 20-25 percent water change is enough each week. It is already ideal for breeding.

But to breed the tetra faster, you can notch it up to 50-60 percent water change twice over the first three days. Then you can go back to doing it only once a week. This method works really well.

This maintenance is to ensure the water doesn’t end up having too much ammonia. Your tetras won’t breed if there’s a lot of ammonia in the water.

How will the breeding take place? The male tetra will chase around the female tetra. The female tetra’s belly will be swollen with eggs. After the female lays eggs, the male will fertilize them.

After the female lays the eggs, their tank mates might eat the fish. So it’s best to put the other fish in a separate tank during the breeding time. 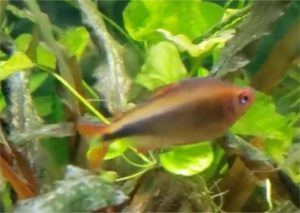 We’ve done a long and detailed discussion about Hyphessobrycon wadai. Let’s sum it all up for a quick read-through of the most important points:

Hyphessobrycon wadai can be the newest and prettiest addition to your fish tank. Who wouldn’t love to raise such peaceful and gorgeous-looking fish? They might be a bit expensive, but watching them run about your tank is worth every penny. 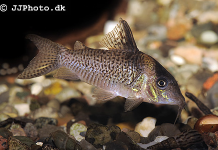