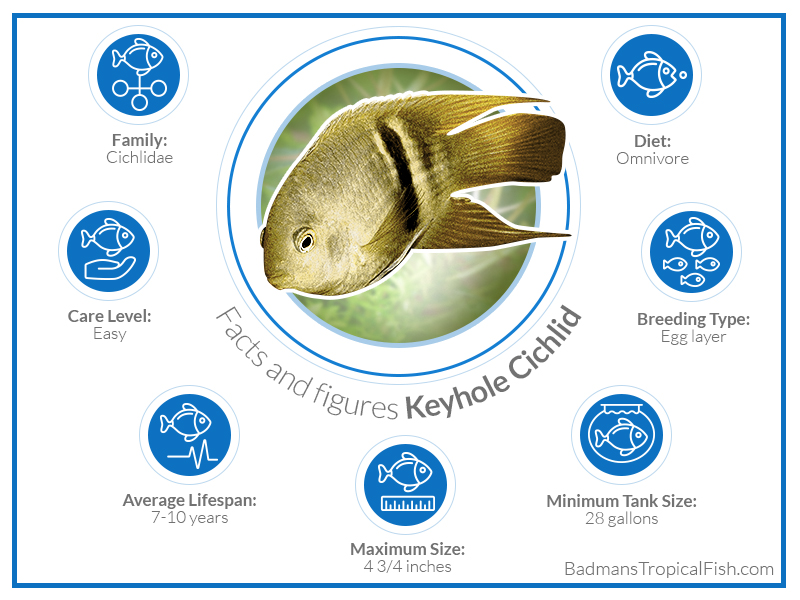 Keyhole cichlid, also known as Cleithracara maronii, gets its name from the ebony keyhole-shaped stripe on its body.

Because of their benthic nature, they are a rather solitary yet serene fish species. However, they have since evolved, and you can breed them in community aquariums.

This article would talk about your keyhole cichlid’s total care system, ranging from feeding it to imitating its natural habitat.

This keyhole cichlids stat table contains essential information about it, which you can learn straight from a glance.

You can take care of your keyhole cichlid by ensuring it remains in comfort, although they adapt nicely. The keyhole cichlid care plan is not so complicated as you only need to maintain the water’s temperature, quantity, and quality. Its tank should contain at least 28 gallons per 100 liters of low current water with a DH of about 20.0

There three other aspects to look at when caring for a keyhole cichlid; pH levels, temperature, and habitat.

They can survive in water habitats with a very low pH, but you should maintain a pH of 6.8-8.0. Ensure to use a filter for their fish tank to reduce and maintain the standard nitrate levels. Cleaning the tank is necessary because it helps conserve water quality and prevents your keyhole cichlid from diseases.

For a keyhole cichlid tank’s temperature, its range should be (75 to 81) Fahrenheit or (25-27) degrees Celsius. It can be a challenge if you reside in any of the cold temperature regions. However, a heater would suffice; get one to regulate and monitor, so the conditions are not extreme. 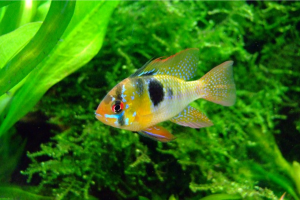 The keyhole cichlid is extraordinarily timid and depends on its habitat to mask or hide it when it feels threatened. It does not mean you should cover the entire tank with caves and rocks. Strike a balance and leave some space for it to swim and play around.

You have to artificially simulate its natural habitat by adding rocks and plants or cave-like shelters. While you decorate their habitat, create a false division in the tank because they like their space and are territorial. In the case of spawning, the keyhole cichlid prefers flat-shaped rocks, so you have to add some into the tank if you except a fry.

The keyhole cichlid compatibility with other species is satisfactory. They are accommodating and can live peacefully with other fishes, so they are ideal for a community aquarium. However, the keyhole cichlids tank mates should be fish of similar nature. They need to be gentle, of similar size, and require the same water conditions (temperature, ph. and territorial divisions).

It is most likely to prey on smaller aquatic animals like crustaceans or tetras. So keep that in mind when building a school in your aquarium. The keyhole cichlid’s monogamous nature causes it to pair up with another of its kind of its choosing. They are always frightened and feel defensive but cope with others when they can hide easily.

Its extreme aggression is off the charts during spawning as they are to safeguard their young. However, they return to their peaceful nature when the other fish move away from their shelter. 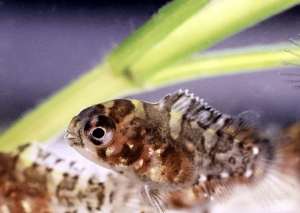 Keyhole cichlid breeding is easy and happens naturally in their habitat. However, here are few key areas to help you comprehend their spawning process.

As with other parents, the keyhole cichlid is instinctively protective of their young but aggressive towards any suspected predator. It can live peacefully as a monogamous species even after the spawning periods. You do not need to simulate them to mate as they would naturally produce fry if the tank has both sexes.

In an artificial habitat, the keyhole cichlids require a standard water temperature, PH, shelter, and flat surface to breed. Flat concrete surfaces (such as a stone or leaves) are critical, as they would only release eggs when they feel safe and secure. The eggs hatch into fry in less than a week and start actively swimming around their territory within a short time.

You can give your baby keyhole artemia nauplii (brine shrimps) at this time. Even when the habitat is comfortable, some fry will not make it significantly if the amount of fish present surpasses the water level or tank size. However, if you can separate the keyhole cichlid into a different conducive tank, it will increase the fry survival rates.

Female cichlids will lay up to 300 eggs at a time and take turns with their mates to watch after them for weeks. They can protect their fry for up to half a year, with the female guarding directly around the egg, the male around their shelter. Both keyhole cichlids would employ the use of oxygenated water to sift through the eggs. They detect and separate the unfertilized ones to prevent infections.

Parent instincts are sadly not common amongst younger keyhole cichlid as they would often feed on their young. Nonetheless, they do this only when they feel threatened. Larger fish or predators are the usual culprits, but the cichlid would rather eat the eggs themselves than allow others.

Keyhole Cichlid Diseases: What It’s Most Likely To Suffer From?

The common keyhole cichlids diseases are Ichthyophthirius multifiliis, flagellates, and fin rot. However, most of these species may seem resistant as they hardly contact diseases in the right habitat conditions.

Let’s talk about them.

It is a ciliate that seeps through the keyhole cichlids’ skin and can survive eight weeks under the right temperature.

At around 1 mm in size, they detach themselves from the cichlid and swim off. The pathogen continues to grow and multiply until it needs to reattach itself to a host. It is highly contagious and will spread fast to other inhabitants of the tank.

An appropriate dose of malachite green and formaldehyde is the perfect cure against the Ichthyophthirius multifiliis. Also, you can use methylene blue to treat mild cases of this disease. However, act fast as soon as you notice because Ichthyophthirius multifiliis causes kidney issues or fatality. Run the medication via the water filter and into the tank for a thorough treatment method.

They are micro-organisms that thrive in the keyhole cichlid intestine but only cause issues when they multiple excessively. The spread of the flagellates is due to illness, dietary deficiency, and wrong water conditions.

Signs of Surplus Flagellate in a Keyhole Cichlids

A sufficient dose of ”metronidazole” is an excellent remedy to get rid of the surplus flagellates. It is active against the reproduction of anaerobes. Diagnose the root disease that led to the multiplication of flagellate in the cichlid intestine and tackles it.

As the name implies, it is a case where the fins of the keyhole cichlid begin to rot due to a bacterial infection. The primary cause of this disease is incorrect water conditions such as dirty water or wrong ph level. However, under the right situations, the keyhole cichlids can still get this because it is stressed. We know this species is timid and would instead be left alone. So if other fishes in the aquarium keep coming close, it causes them to live in fear.

To treat fin rot on a cichlid:

Most keyhole cichlids suffering from fin rot predominantly die from stronger predators. As other inhabitants observe and notice a weaker or sluggish fish, they chase it down and finally attack it until it dies.

Keyhole Cichlids Diet: Meals To Give

The proper keyhole cichlids’ diet is flesh from other smaller animals because they are naturally carnivorous. However, they have evolved into omnivores and will eat what is available when there is no other option.

The keyhole cichlids diet include frozen food, vegetables and flesh like crustaceans and worm. We also suggest meat or veggie-based pellets are also ideal. You can feed younger keyhole cichlids with brine shrimps and worms. They are highly nutritious and help them mature rapidly.

You can opt for smaller multiple feeding schedules or feed them two main meal times. Change up the food so it doesn’t get boring, and cut them into fish-bite-sized pieces. 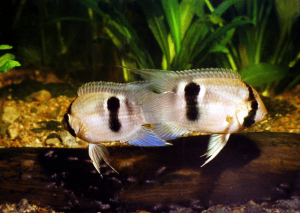 Keyhole cichlids are an adaptable but solitary breed. Under the right habitat conditions, they thrive without extra effort. How about you get a pair of keyhole cichlids and enjoy life with this exciting species. 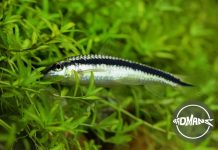 Siamese Flying Fox: Are They Good Pets for Beginners? 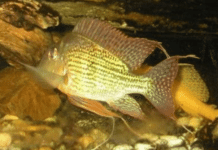 Java Fern Growing Roots on Leaves: The Reason Behind the Strange... 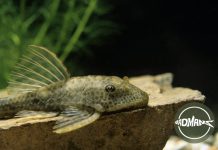 Poop Eating Fish: The Most Common Misconception in the Hobby