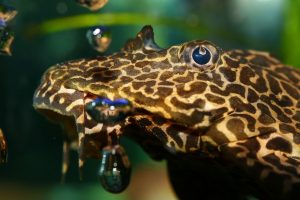 The Leopard Frog Pleco (L134), a.k.a Peckoltia Compta, belongs to the Peckoltia genus of armored suckermouth catfishes. They’re native to the Amazon basin, Brazil. However, they’re also sought after as freshwater aquarium occupants due to their brilliant coloring and compact size by fish keepers.

That’s why we reached out to our fellow expert aquarists to unearth all essential details about the care of this species. All you have to do is stick with us as we break down what Leopard Frog Plecostomus maintenance looks like!

One of the first things hobbyists consider when bringing home a new inhabitant is its temperament and looks. If you’re curious to know how Leopard Frog Plecos measure on these two scales – this section is for you.

Being a part of the Pleco family, Leopard Frog Plecos have the unique “suckermouth” oral cavity. If you observe the species up close, you’ll realize their mouths resemble suction cups that help them latch onto the smooth glass surfaces of the fish tank.

Their heads are large compared to their somewhat lean bodies, and their eyes are placed high on their heads. Strangely enough, like different types of Pleco fish, the Leopard Frogs also have a thin membrane on their eyes to help them control the light entering their eyes.

However, the most striking characteristic of the Leopard Frog Pleco is its color. Their bodies are a brilliant mix of vertical black and yellow stripes that get broader towards the tail. It’s important to note that some of these fish might be dull-yellow in color instead of bright amber — but that’s natural. There can be color variation within the species, and it’s not linked to the health of the fish at all.

Peckoltia Compta possess a mild temperament, and their calm nature won’t upset the balance of your community fish tank. They’re cave dwellers in the wild and can seek out dark corners to hide in if they sense danger.

The males of this species can get a bit angsty at times if there’s not enough room in the fish tank or if you house multiple male Leopard Frogs together.

Additionally, Leopard Frog Plecos are nocturnal in the wild. But, when they move to your aquarium, they’ll adjust to their new timetable within a few days. You’ll notice they’re pretty active during the daytime once they’re well settled in their habitat.

Fish enthusiasts with well-established tanks are often worried about making additions to their aquarium. That’s mainly because they’re concerned about how well the new inhabitants will adjust to the fixed atmosphere. If you’re anxious about the same, take a moment to go through our care-specific section to put all your doubts to rest.

Considering that male Leopard Frogs can get irritable if there’s not enough room in the aquarium, the minimum requirement when it comes to tank size is 30 gallons.

What’s more, if you’re planning on keeping several Peckoltia Comptas in one tank it’s best to get a bigger tank to avoid any disagreement between the fish.

Since Leopard Frogs are suckermouth catfishes who spend most of their time around the tank’s bottom level, it’s also a good idea to have a surface space that measures at least 12 by 12 inches. That way, you’ll also have enough space to add habitat-specific items to make them feel more at home.

A Leopard Frog Pleco tank should have stable and consistent water parameters, and that’s really the most important thing for this species. These fish are incredibly susceptible to stress due to fluctuating water conditions. Extreme changes can even lead to death.

Now, on to the specifics. Despite their hardy nature and robust constitution, Leopard Frogs will flourish within a water temperature range of 76 to 86 F. Remember: These Plecos hail from the Amazon basin, where the water’s pretty warm and well-oxygenated. You’ll also have to ensure that pH and water hardness remain between 6.5 to 7.5, and 7 to 10 dH.

Anything above the ranges mentioned above can pose a serious threat to the life of your Leopard Frog Pleco. That’s why, if this is your first attempt at fish keeping, it’s best to invest in a good-quality water testing kit that’ll keep you updated on your tank’s water condition.

Finally, keeping up with cleaning your fish tank to maintain the water quality is another vital factor of care for a Leopard Frog Pleco. How often you should clean your tank depends on various factors, such as tank size, the number of fish, the efficiency of your filter system, etc.

Still, aquarists with medium-sized tanks will do well with a weekly water change. Just replacing 25 percent of your tank’s water with treated water once a week can help you promote your fish’s well-being.

Unlike large Pleco fishes, setting up a habitat for Leopard Frogs isn’t too tricky. These cave-dwellers will appreciate a replication of their natural habitat, and that means you have the option of adding rock structures, Pleco caves, driftwood, and even plants.

Leopard Frogs adapt better to a sandy substrate that allows them to move freely and graze at the bottom, like they’re wired to do in the wilderness. Some experts state that ingesting sand can also help with the species’ digestion.

You can either invest in Pleco caves or use driftwood and rocks to create cave-like openings for the fish to retire to. These structures can also come in handy if you’re planning on breeding your Leopard Frogs.

If you’re wondering about the kind of plants you should add, we’d recommend sticking to floating plants like Hornwort or Cabomba. Or, you can also opt for large-leaved options like Java Fern, which will also help tone the harsh light to make your fish at ease.

There’s a misconception about the Leopard Frog Pleco that labels it an effective algae-eater. According to our experts, that is not entirely accurate.

You see, even though Leopard Frogs are bottom-dwellers, they’re not partial to consuming algae. Instead, this species is omnivorous and has a liking for meaty snacks.

Peckoltia Compta enthusiasts will be happy to learn that the species are surprisingly easy to please in terms of food. They will readily eat frozen treats like bloodworms, and good-quality flakes, pellets, and wafers.

Once in a while, you also treat your Leopard Frogs to veggie snacks, like bite-sized pieces of cucumbers or zucchini. In short, it’s best if you include plant matter and protein in the species’ diet for optimal health.

No fish care guide is complete without a lifespan, size, growth rate statistics section. Information like this can help fish keepers prepare for the arrival of their new pet or make changes to ensure all inhabitants of the aquarium remain at peace. We’ve also added a “common illnesses” subheading to this section, to inform our readers of health conditions they should watch out for.

The average lifespan of the Plecostomus family ranges between 10 to 15 years. On the other hand, Leopard Frogs have an expected average life expectancy of eight to 10 years.

Readers should remember that the above lifespan estimation is based on the best-case scenario. That is, where a Leopard Frog Pleco has all it needs to live a healthy, disease-free life.

Some Plecos can grow up to 24 inches in size. Thankfully, the Leopard Frog Pleco size is nowhere that challenging. Considered one of the smallest members of the Pleco clan, Leopard Frogs can grow approximately 3.4 to 4.3 inches in length – making them highly manageable in aquariums.

Experts aquarists state that Peckoltia Comptas complete the majority of their growth in the first year of their lives. After that, the species tends to retain its length and doesn’t change much.

The Leopard Frog’s strong nature doesn’t protect it 100 percent from all diseases – which is all but natural. Here are some of the common illnesses this species can face:

Ich is a parasitic disease that manifests as white spots on the body and fins of fish. This disease is found in aquariums where water quality isn’t great, and the illness is easily treated through medications available at fish and pet stores.

Hole in the Head

Also known as pop-eye, this illness is a bacterial infection resulting from poor nutrition, poor water quality or an excess of activated carbon. Treatment for this condition revolves around changing water to make it healthier, and providing vitamin supplements.

As the name suggests, this fungal condition can result from inadequate water changes and low water temperatures. It looks like gray or white growth on a fish’s body and requires treatment from a specialist fish store or aquarist.

One of the factors that make Leopard Frogs suitable for beginner aquarists is that they tend to get along with most fish species. For instance, Pecktolia Compta does well with small-sized Tetras, Gouramis, and even Guppies.

Advanced aquarists recommend keeping Leopard Frogs with Dither fish because they help them feel safe. The cave-dwelling nature of Leopard Frogs can sometimes make them apprehensive about venturing out in the aquarium. However, the presence of Dither fish can help them understand there’s no threat or danger.

It is possible to breed Leopard Frog Pleco in captivity, but the process can be a little complex for newbie fish keepers.

It’s a smart idea to work on creating the right environment before taking measures to induce breeding. For example, as mentioned earlier, Leopard Frogs like laying their eggs in caves or crevices where the fry can remain safe until able to fend for themselves.

So, the order of business is to add caves or create them with rocks and driftwood — that is, if you don’t have any in your tank. Once the scene is set, you can lower the water temperature slightly to trigger breeding.

Once the female lays the eggs in the cave, the male tends to guard them and may turn territorial during this time. The eggs will take about seven days to hatch. You can feed the fry with baby brine shrimp to promote growth.

Leopard Frog Plecos are suitable for beginner and intermediate-level aquarists due to their relatively effortless care routine and small size. Here are some of the essentials about the appearance, nature, and maintenance of this species.

We hope that you have found everything you needed in this article. Ready to start a new adventure caring for the Leopard Frog Pleco? 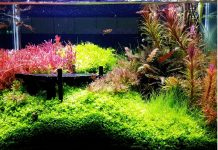 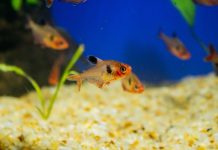 Tetra Fish: The Tiny Treasures of the Freshwater Aquarium 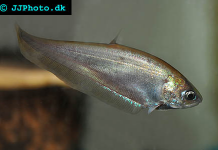 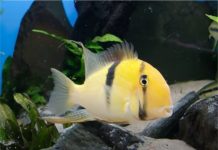