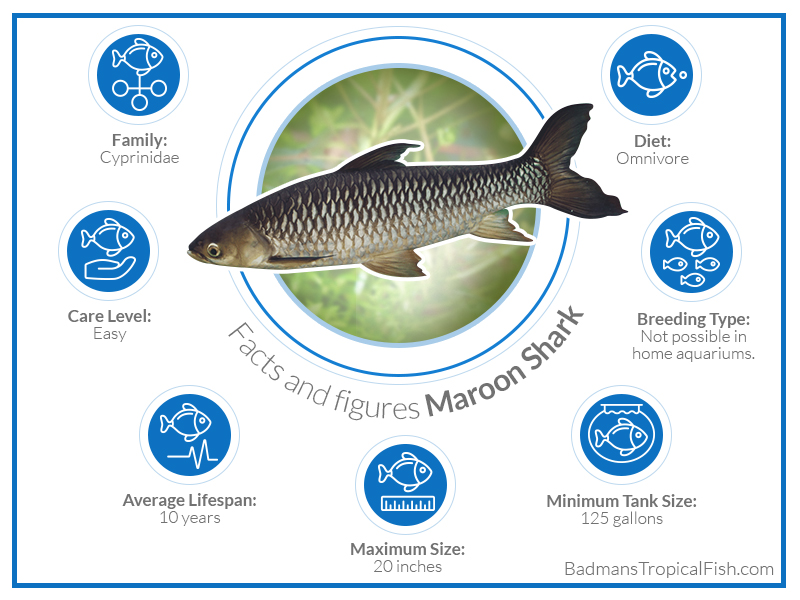 Maroon shark, also known as leptobarbus hoevenii, is an aquarium fish, although not ideal for home aquariums. Unlike what the name suggests, it isn’t a dangerous fish. If you’re willing to keep a tank that is over 100 gallons, you can consider getting young maroon sharks for yourself.

This article will guide you on what you need and how to manage these fish as a hobbyist.

The fish breed maroon shark belongs to species of leptobarbus hoevenii. This fish comes from the family of Cyprinidae.

This fish is also known by a few other names:

Maroon shark’s size is close to 20 inches (approximately 50 cm). However, this fish continues to grow for many years and has been known to grow bigger than 20 inches too. 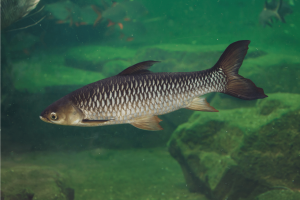 So, it isn’t ideal for an average-sized home aquarium. But, if you can keep and maintain something around 125 gallons, you can consider getting this fish.

As for a maroon shark’s lifespan, they can live for up to 10 years on average. This, of course, depends on the living conditions and diet that is offered to the fish. Health and habitat play a major role in their life expectancy.

The natural habitat of Maroon sharks is freshwater lakes and rivers. You could find them in abundance in the South Eastern Asian Islands. The rivers that flow from Thailand to Sumatra were the original homes of maroon sharks.

While these water bodies were once full of this fish, they have now become very rare. This drastic change is likely a result of overfishing the maroon sharks. As of today, these fish are farm-bred, only. Hormones are used to promote spawning in this process.

Maroon shark is often confused with L. rubripinna but the latter is a separate species. You may also find some swimming mid-water but there will be hardly any fish of this species near the top surface.

Unlike the name, it is neither maroon in color, nor it is close to what a shark looks like. The only similarity between a shark and this fish is the triangular dorsal fin and a similar body shape. Its body is shaped like a torpedo. Moreover, the scales are very well-defined on a maroon shark’s body.

Moving on, when the fish is young, it is no more than 3-4 inches big. This is why a lot of people don’t hesitate to bring it home. However, what you need to keep in mind is that maroon sharks can quickly grow to up to 20 inches or even bigger. On top of that, since they are schooling fish, they have to be kept in groups which is why they aren’t a recommended breed for regular home aquariums.

How to Care for Maroon Sharks

The first thing that you need to know about maroon sharks is that once you get them, you have to keep them. You may think you’ll keep the fish while it’s small and tiny and then return it to where you got it from. Well, here’s the bummer: no one will take back a grown-up, huge fish.

It is also not recommended that you let the fish free in an open water body. This fish or any other nonindigenous fish should never be dropped in local waterways. You must euthanize the fish before letting it go out in the open. Another option is to check with local public aquariums that may have the resources to keep a big fish in a suitable environment.

If you’re ready for all the responsibility and are still willing to keep maroon sharks, here are some dietary and environmental requirements you should be prepared to provide.

Even in their wild habitat, maroon sharks prefer large rivers or lakes. So, it is extremely unethical and immoral to force a fish of this kind to live in an enclosed space. You must offer the best possible conditions as close to an ideal natural habitat as possible. Otherwise, opt out of getting a fish like the maroon shark for yourself.

The first and foremost requirement to be fulfilled should be a roomy tank. Maroon sharks like to swim around openly. Considering their big size, you must be able to provide enough space. Also, keep the tank decorated with smooth rocks and leafy plants that do not crowd the aquarium.

Other than that, the water should have a pH between 6.5 and 7.0. As for the hardness of the water, it should ideally be 10.0dH but can range from 5.0dH to 15.0dH. Keep the temperature of the water in the tank between 72 degrees to 82 degrees Fahrenheit. These fish are quite sensitive and a low water temperature can cause the white spot disease in them.

Maroon sharks are omnivorous fish. They will pretty much eat anything. For a pet maroon shark, you should offer a balance of frozen food, live food, and flake food. Pellets and vegetables should also be added to their diet generously.

Daphnia, mosquito larvae, bloodworms, and tubifex worms are the fish’s favorite live food. As for vegetables, the fish will eat pretty much anything you offer. Spinach and peas are some safe options, to begin with. Moreover, you can also offer fresh fruits to maroon sharks.

Peaceful fish are generally very easy to keep for fish lovers because they can fill up their tank with lots of fish species without a worry of chaos. Well, maroon sharks fall somewhat in this category, too. Their nature is very calm. They also tend to adjust easily with their tank mates.

While that widens the options of tank mate options, you also need to remember that once maroon sharks grow bigger, they will eat the smaller fish around them. Snails, shrimps, and other invertebrates are a part of the maroon shark’s diet. So, it is best to not keep them in the same tank.

Since these fish are active themselves, it is best to pair them up with equally energetic fish. The slow ones will get easily intimidated. Moreover, since maroon sharks like to live in groups, they can quickly become dominant over small fish groups. All in all, the ideal tank mates for these fish are ones with a similar nature and size.

These big fish are not easy to breed in home aquariums. The first challenge is identifying the genders. There is pretty much no visible difference between males and females. The only way to distinguish the males from the females is that the latter has a rounder-looking underbelly during the spawning phase.

Even if you successfully separate a mature couple, it is hard to offer a spacious enough breeding tank. It is almost impossible to manage such a huge tank inside any home. This is why maroon sharks are bred commercially. That, too, isn’t the easiest process and a lot of supporting hormones are used to encourage breeding.

You are now well aware of the entire picture. Whether a maroon shark is an aquarium fish or not entirely depends on whether or not you can provide what they need. But it is certainly not an option for your average fish enthusiast.

Here is what we discussed today:

No matter what level of expertise you have in dealing with fish, it is only right to bring home a fish breed if you can offer it the best living conditions.

Maroon sharks are not the easiest to pet so if you have any doubts, the best thing that you can do as an aquarist is to go for another fish breed to liven up your home aquaria!

Temperature, tanks and young guppies, Article 6 on the care, upkeep... 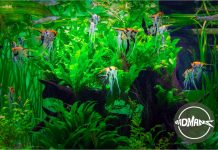 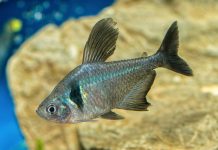