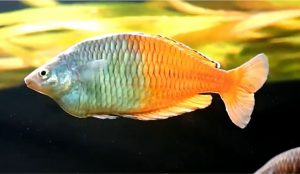 Melanotaenia maccullochi is one of the smaller rainbowfish species that is in demand for home aquariums.

The first Dwarf Rainbowfish were exported from their native habitats in Australia, Madagascar, and Papua New Guinea in 1934. Since this fish spawns freely in aquariums, it is now quite popular with fish hobbyists.

We have put together some facts about the Dwarf Rainbowfish. They are fun pets and will make an excellent addition to your home. We hope this information proves helpful and you’d like to add them to your aquarium.

Melanotaenia maccullochi is commonly known as the Dwarf rainbowfish because it grows to a maximum of 2.8 inches. These fish have a splendid iridescent coloring that changes from blue and yellow to shiny silver. Their shimmering bodies have bright red fins with black horizontal stripes.

However, once the young Melanotaenia maccullochi settle into your home aquarium and feel secure, their color will gradually develop. You will see them in their stunning beauty.

The specimens from coastal Queensland have muted colors and paler stripes. But aquarists love them for their bright red fins.

Most rainbowfish flaunt their best colors at sunrise when the males try to impress potential mates with their brilliant fins. If there are more females than males, you will see more color displays and prevent aggression towards females.

Melanotaenia maccullochi, also known as MacCulloch’s rainbowfish, is native to Papua New Guinea and Australia. They are incredibly hardy and live in varied biotopes, from still ponds to flowing streams.

However, the one thing common to all their habitats is the abundant vegetation.

Melanotaenia maccullochi are generally shy and gentle sociable creatures that flourish in shoals. These fish get stressed if they are lonely or in a small tank with insufficient space to swim around. You can keep MacCulloch’s rainbowfish in a species aquarium in a conspecific group of at least eight fish.

The Dwarf rainbowfish is happiest in a heavily planted setup. They enjoy swimming and appreciate a spacious tank where they can swim freely. It is also essential for their well-being that the water in the tank is immaculate, so it would be best to do partial water changes weekly.

Hobby aquarists enjoy the Dwarf rainbowfish since they can adapt to both acidic and alkaline water conditions. The water should be at 5.5 – 7.5 pH, preferably about 6.8 pH, with ammonia and nitrites at 0 ppm. The temperature should be 68 – 82 F.

When you set up the aquarium, try to replicate the natural habitat of the Melanotaenia maccullochi and include plenty of aquatic plants and driftwood. You must create plenty of hiding spots for these timid fish to prevent them from getting stressed.

It would be good to have a heavy or tight-fitting lid for your tank. Dwarf rainbowfish can jump out of the tank when they feel threatened.

MacCulloch’s rainbowfish is peaceful and suitable for many community aquariums since it adapts well to different water chemistry. They are also an excellent community fish that you can house with other small, non-aggressive species.

Suitable options for tank mates are:

Dwarf rainbowfish do not hassle their smaller tankmates, as their mouths are too narrow to swallow them. The Dwarf rainbowfish is unlikely to eat any species except for small invertebrates like Bee and Cherry shrimps.

On the other hand, It is not safe to keep Melanotaenia maccullochi with very aggressive fish or piscivorous specimens like large Archerfish or the larger Cichlids.

Melanotaenia maccullochi is an easy species to breed as they are egg scatterers. Feed the fish with high-protein frozen or live foods for a couple of weeks before spawning. The male Dwarf rainbowfish have a yellow streak on their head and back of the neck when they are courting.

Set up a separate breeding tank with lots of finely-leaved plants. The breeding aquarium should be a minimum of 30 inches long with slightly hard and alkaline water. Keep the temperature at 80 – 84 F and 7.5 ph. You can install a small air-powered filter for oxygenation and flow.

If plants are not available, use spawning mediums such as java moss or nylon spawning mops. No substrate is necessary.

While Dwarf rainbowfish tolerate a wide variety of water parameters, the water must be clean. If you change the water frequently, the fish will spawn nearly continuously. Melanotaenia maccullochi deposit their eggs in weedy areas, so that means you can use a yarn mop instead. The eggs will hatch seven to 10 days later.

The mating pair will continue to spawn for several days. The male will lead the female to a spawning area. The female will lay batches of eggs every day and attach them to the surfaces of plants by a tiny thread, and the male will fertilize them.

If you plan on breeding your Dwarf rainbowfish, it is necessary to be aware that they can and will crossbreed with other species. The resulting young are often discolored and stunted. It is essential to house Melanotaenia maccullochi in a species-specific aquarium.

You can harvest the eggs and keep them in a separate tank to avoid predation.

– How to Care For the Melanotaenia Maccullochi Fry

The Redfin Dwarf rainbowfish is relatively easy to breed. However, raising the fry could be a bit demanding.

Although the adults do not eat the spawn, raising the fry in a separate tank is a good idea. We suggest you make an independent raising tank filled with water from the spawning tank. Please check the mops or plants routinely and move any eggs you find to the raising aquarium.

The eggs will hatch in 7-12 days, depending on the temperature of the water. You will need to feed the tiny fry with infusoria–type food for a week or so before they graduate onto free swimming foods, such as brine shrimp or nauplii. The fry stays very close to the water surface, so sinking foods are unsuitable as they pollute the tank.

What Is a Balanced Diet for Dwarf Rainbow Fish?

Melanotaenia maccullochi, like most congeners, is not a picky eater. They are omnivores and will accept most high-quality dried foods such as green flakes, micropellets, daphnia, live and frozen foods like mosquito larvae.

Giving these fish small quantities of food at regular intervals will help them stay healthy and exhibit their most desirable colors.

Feeding Dwarf rainbowfish a balanced, flake-food diet is vital. However, overfeeding fish is the leading cause of problems in fish aquariums. If the food falls to the bottom of the aquarium, you are overfeeding your fish.

Excess food in the tank will dirty the aquarium and cause an imbalance of water parameters.

If you’re still not sure about adding the Melanotaenia maccullochi to your home aquarium, here’s a quick summary to help you. 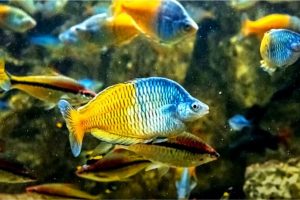 Melanotaenia maccullochi will light up your aquarium with its fantastic, glimmering colors.

Not only do they look great, but you will have fun watching them dart in and out of plants. You will love adding the pretty Dwarf rainbowfish to your aquarium. 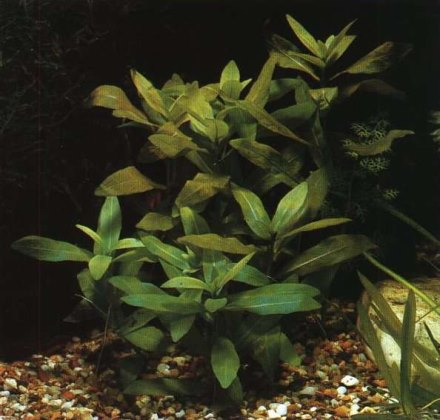 The Importance of Regular Water Changes 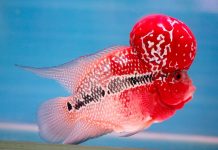 Flowerhorn Cichlid: How To Care for this Man-Made Hybrid 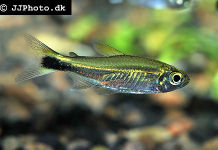