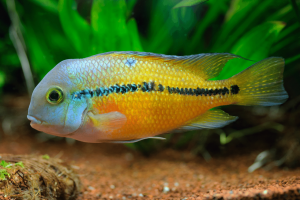 The Nicaragua cichlid, also known as Spilotum, Moga, Butterfly cichlid, or Macaw cichlid, offers a brilliant spectacle in home aquariums. However, there is more to this fish than its attractive appearance.

Get to know this species better and learn the best way of taking care of these gorgeous fish!

Distribution: Where Do Mogas Originate?

As the name suggests, this species is native to Lake Nicaragua, and it can also be found in the Matina River drainage in Costa Rica.

The Nicaragua cichlid has an elongated, oval-shaped, and laterally compressed body. Males can grow up to 25 centimeters (10 inches), while females max out at 20 centimeters (8 inches).

Macaw cichlids are one of the most spectacular-looking fish in the hobby. As with most fish, males are larger than females, but it is the latter that displays the most flamboyant of colors. The coloring, however, will depend upon the locality of the species collected.

In Nicaragua, many of these fish have the following characteristics:

There exist numerous colors and pattern variations within this species. However, juveniles tend to look dull and unattractive, which makes them hard to sell. That is why only a few shops sell them, causing many fishkeepers to miss out on these gorgeous species.

Macaw cichlids are a breeze to care for provided that the fish have a varied diet and a clean habitat.

These omnivores will accept most aquarium foods and enjoy thinly sliced cucumbers, carrots, and squash as snacks.

To keep a good balance, offer your pets high-quality flakes or sinking pellets every day and supplement this diet with occasional servings of:

Some sources may suggest feeding your fish with bits of red meat, poultry, and beef offals, but these types of food are best avoided. Feed your pets with blanched vegetables, instead.
Fry, on the other hand, will consume their egg sac. As the hatchlings grow bigger, feed them brine shrimp and crushed flakes.

This species is quite sensitive to nitrogenous waste, which is often a nagging problem in densely stocked home aquariums. You will need efficient filtration to prevent nitrate and phosphate levels from building up rather too quickly. Always make a habit of replacing 20% to 25% of the tank water every week.

The water flow should not be too strong, as it could stress out your fish. Macaw cichlids inhabit rivers and streams with moderate current. Use rocks and caves, as these decor act as buffers that reduce the impact of strong currents produced by a powerful filtration system.

The Nicaragua cichlid lifespan ranges between 10 to 15 years, but your fish may die early due to an illness.

As with the majority, this freshwater fish is subject to diseases caused by poor water quality and oxygen depletion. A few common problems include Ich, skin flukes.

This species is also prone to Head and Lateral Line Erosion (HLLE), a disease that causes pitted holes around the eye area towards the tail. This disease can be cured by replacing 90% of the water to pull down the pH level and remove activated carbon.

Macaws like to modify their surroundings — in other words, ruin the aquascape. Don’t worry; you may still keep your aquarium aesthetically pleasing by following the recommendations below.

A minimum of 50 gallons (190 liters) is ideal for one adult Nicaragua cichlid. If you decide to keep more or add several other compatible species, then you will need a much larger tank.

Given that Nicaragua cichlids are pit spawners, use fine sand as the substrate.

You may include vegetation to give consideration to other species, but be sure these plants are firmly grounded. Mogas will uproot them with their incessant digging, and their behavior tends to worsen throughout the reproduction period. The leaves should also be hardy and bitter-tasting to deter these fish from chomping everything.

Moreover, provide numerous hideouts, such as clay houses, logwood with holes, and slate caves. Nicaragua cichlids are territorial; they will choose a home and defend it from intruders.

The Nicaragua cichlid may not be the friendliest species, but they are relatively peaceful compared to other Central American cichlids.

How Do Nicaragua Cichlids Behave in Captivity?

Nicaragua cichlids prefer to keep their distance and hang out near the bottom, but they may also swim in the middle portion of the aquarium from time to time. Albeit a non-aggressive species, it is inadvisable to house them along with fast, boisterous multi-level swimmers. Mogas exhibit territorial aggression throughout the reproduction period, particularly the males.

Can You Keep Nicaragua Cichlids in a Community Tank?

Macaw cichlids are best kept in a species-exclusive tank or with other non-aggressive South American cichlids of the same size. Avoid housing them with the Red Devil cichlid and Texas cichlid, among other aggressive species.

Other possible tank mates include:

The Nicaragua cichlid compatibility towards its own species is also rather slim. To avoid aggression, raise a group of juveniles, rather than introduce mature males and females. 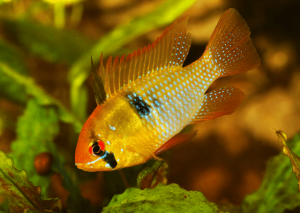 Aside from their brilliant colors, the most beautiful characteristic of Butterfly cichlids is their parenting methods. The Nicaraguan fish cichlid forms patriarch-matriarch families. More impressively, a pair will remain together for life!

The problem, however, is that it can be difficult to find a compatible pair. These fish can be quite aggressive towards newcomers of the same species. An excellent strategy is to start with a school of 6 or more juvenile fish, so they could grow together and pair off naturally.

Once you obtain such a pair, the rest of the breeding process should continue without much hindrance.

How Do You Identify Male and Female Nicaragua Cichlids?

Sexing the Nicaraguan cichlid is not that hard. Adult females will always be smaller and exhibit bright, vivid colors. Their coloration intensifies prior to spawning. Moreover, their dorsal fin is not pointed and they do not develop a nuchal hump on their head.

Males, on the other hand, are slightly larger than females. They have a pointed dorsal fin. There are also minor differences in the pattern. Additionally, males possess a pointed genital papilla and they develop a permanent nuchal hump.

How Do Nicaragua Cichlids Breed and Take Care of Their Young?

In the wild, Nicaragua cichlids spawn in small tunnels dug into clay river banks. Being confined in a tunnel ensures the eggs will not be swept away by the water current.

But in captivity, you should treat them as monogamist cave spawners. Some may also dig out a big depression in the substrate, often under a rock.

To ensure success, do the following:

The spawn may consist of up to 400 transparent eggs, about 2 mm in size. If the tank has a constant temperature of 79° F (26° C), the eggs should hatch within 3 to 4 days. The hatchlings then become free-swimming after another 4 or 5 days.

On the downside, the eggs are non-adhesive, and thus, they do not attach to the walls or ceiling of a cave. As a result, only 20% to 50% of the eggs will hatch. The rate drops even lower if the male is not yet fully matured.

But unlike other species, both parents will assume duties. The female takes on primary brood care, while the male provides guard and defense services.

Although both parents are devoted to taking care of their young, you should not separate the fry from the adults rather too early. The male may otherwise decide to spawn again. If the female is not ready and refuses the male, the pair might turn against each other.

Can You Try Crossbreeding?

The Nicaraguensis cichlid has been successfully crossbred with the Convict cichlid, although the practice is highly discouraged.

The Nicaragua cichlid species are as beautiful as a rainbow, and the way they care for their young truly makes them one of a kind.

These fish can be a bit aggressive when their paternal instincts kick in, and therefore:

If you have some previous experience with semi-aggressive fish, then there shouldn’t be a problem having these guys around. Take note; these fish don’t start out as pretty, but these ugly ducklings will surely make a great centerpiece in your aquarium once they grow into adults. 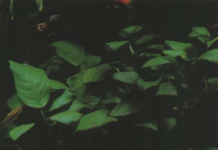 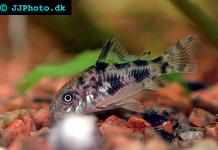