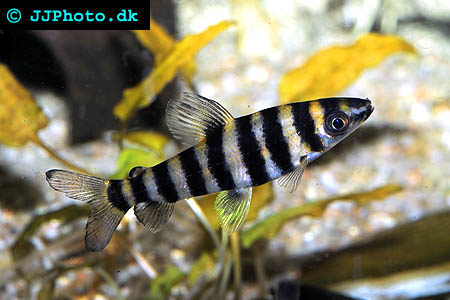 Seen frequently at shops when small the Banded Leporinus is not a fish for the beginner. Stunning in color, it is a fast grower that has a mean streak to smaller fishes. They are fin nippers that sneaks up on its’ prey no matter what size. A super jumper the aquarium must be tightly covered.

Bullet shaped and elongated and somewhat compressed laterally. Dorsal profile is more convex than the ventral profile. The name Leporinus comes from Latin and roughly means “of a hare ” this is because the shape of the upper lip is very similar to that of a hare, hence its name. These fish can reach a length of twelve inches.

Mustard-yellow to golden-yellow with nine fairly thick black bars that run from top to bottom that sometimes split at the belly area and fade out on the underside. The nose has a dark spot. The first bar covers the forehead joining the eyes the second bar covers the gill edges. The last bar flares out in front of the Caudal fin into a crescent shape. There are no visible differences between the male and female. Some subspecies have been named due to variations of color and bar patterns. I do not know if they are valid. 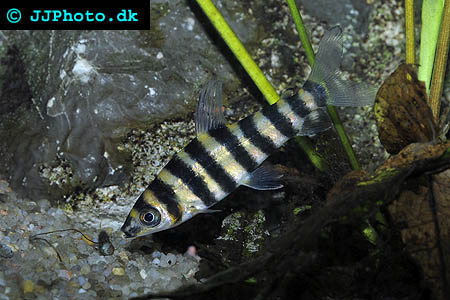 MaintenanceA somewhat peaceful species that benefits from a large aquaria. Its tank-mates should be of the same size and temperament, no long finned slower moving fish such as Angels as they are notoriously sneaky about fin-nipping. The tank bottom should be gravel covered with plants and decorations. Feeding is not a problem as they take prepared staple food along with supplements of live and frozen food.
Their pH should be neutral [7.0], GH of around 10, temperature range of mid seventies to low eighties. They dwell in the middle areas of the tank. They are egg layers and to my knowledge have not been bred in captivity. Keep the tank well covered as they are great jumpers and can travel many feet. The Leporinus is a fine addition to any tank and Badman recommends them to anyone willing to meet their requirements.

No reports of successful breeding in captivity have been reported 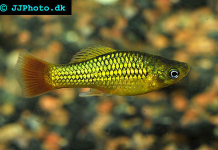 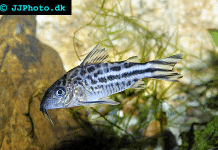