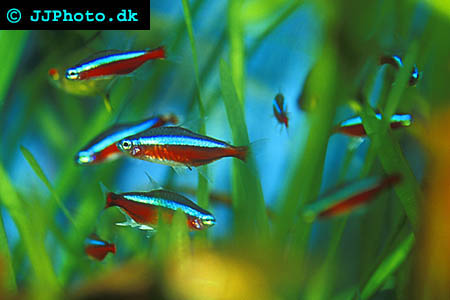 Similar to the more common neon tetra the cardinal has more stunning stripes. More demanding in their water requirements and usually twice as expensive the Cardinal is not a beginners fish. Once established they are relatively hardy and can make a stunning display. 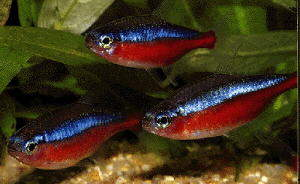 Northern South America, Venezuela, through Brazil Into Eastern Colombia. Found in the tributaries of the Rio Negro and the Orinoco river.

This species is more elongated than the Neon Tetra. Which it otherwise resembles in shape. These fish can reach a length of about one and one half inches. Sexually mature females are more stocky than males and are generally a little longer.

The fins have no color and the upper-side is a Brownish-Red. A wide single stripe extends along each side of the fish from the upper parts of the eye to just below the Adipose fin. This stripe can appear Sea-Green, Yellow-Green or Turquoise-Blue, depending on the angle that the light hits it. Below this stripe is a wide bright Red band that can be seen on the lower half of the body , running from the underside of the mouth including the throat, and all the way back to the base of the Caudal fin. This fish is often confused with the Neon Tetra, but in the Neon the bright Red band is shorter, only running to the middle of the body.

A somewhat delicate fish that is sensitive to water conditions. The tank should be a planted aquarium, with some floating plants to cut down on the light intensity. A darker substrate material will bring out the Cardinals colors best. Tankmates should consist only of other peaceful species,with no Cichlids. A temperature of 75° to 84° degrees F (24° to 29° c.) should be maintained and water of middle hardness to soft is recommended.

Biotope:Found in slow-moving, clear and blackwater creeks with much vegetation

Soft water, with 1° – 2°of hardness, Ph of 5.0 – 6.0 and a water temperature of about 82° f. Use Java moss or a synthetic substitute over the bottom of the tank and reduce the lighting. Cardinals usually spawn at twilight. The male embraces the female when spawning and about 500 eggs are scattered among the Java moss. Remove the parents. The eggs hatch in about 24 hours and the fry are free-swimming in about five days. Feed the young on Infusoria and later on , newly hatched Brine Shrimp. The Cardinal is not easily bred and most specimens are still imported from their native waters. 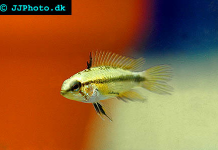 How to Choose the Fish for your Aquarium – The Beginner’s...