Once the king of the hobby the guppy has been replaced by other species in popularity. Through selective breeding many new variations and colors are available to us today. Still popular the guppy has many traits that make it an attractive buy for the hobbyist.

South America, North of the Amazon and in Barbados and Trinidad.

Males are elongated and the females are larger and plumper. In developed strains the male will show a large Caudal fin, usually brightly colored.

Females are usually a rather dull green to yellowish-Green. The scales have dark edges that give the body a reticulate appearance ( hence the name ). selective breeding has increased the females coloration, but as of yet they can’t compare to the male.

An easily cared for fish that does well in all types of community aquaria. Give them a fairly large tank with live plants and open swimming areas, avoid too much driftwood as a rule the livebearers do not like acidic water. Although not a schooling fish they benefit by being kept with a large number of their own kind. Temperature range from sixty-eight to eighty-seven degrees, water with a pH of 7 to 8.5 and hard to medium hard. You must provide a fairly large tank if you want their finage to develop to its potential. Cultivated varieties with very large fins should be kept singly. Guppies will except all types of flake food and small live food.

BiotopeStanding and slowly moving water, originally in Northern South America and the Caribbean. 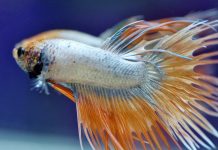 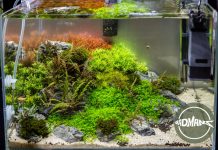 How To Reduce Water Hardness in Aquarium: 11 Strategies to Apply 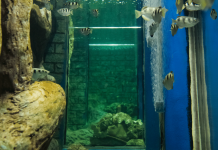