Badis are a peaceful species, though best kept in a species only tank due to being territorial after spawning. Badis are particularly helpful at reducing snail populations should they pose an issue in a tank. They are a shy, tiny, tropical freshwater fish considered one of the more underrated species in the hobby, neglected despite their brilliant coloration, stripes, and unique personality reminiscent of dwarf cichlids that make them quite an interesting species to keep and watch.

Male Badis look a bit slimmer than females, and their pelvic fins also extend out further as they develop and mature than those of the female.

Males are also more colorful than females (which are without the red or blue colors on their flanks), making them the more popular sex for importation. The Badis come with seven bold stripes along their body.

Badis prefer the best of both worlds: well-planted tanks offering lots of hiding places and dark “secure” areas between rocks and wood, as well as open swimming areas to move around in. Using the water conditions above should render very healthy and vibrant Badis.

Badis accept all varieties of food from the staple quality flakes, to blood worms and white worms as treats.

Badis prefer to spawn in caves or other secure, hidden-away areas. Their mating ritual consists of swimming around one another in circles, periodically locking their mouths together, after this they will enter the cave to spawn (Sound familiar?). Their eggs hatch in 2-3 days however the fry do not hatch “free swimming.” Brine shrimp are a recommended food for the new fry. Either a single pair or a group of adults can be used for spawning, but if using multiple males be sure to provide each with space to form a territory of at least 12″ x 12″ per male. Females leave the area post-spawning and the male Badis defends the territory against intruders, tirelessly patrolling the area. All in all the Badis can be expected to live 3 to five years in a healthy tank. 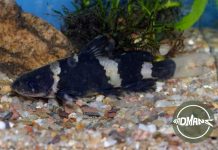 Bumblebee Catfish: Guide To Ensure Your Fish Thrives in Its New... 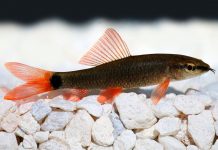 Temperature, tanks and young guppies, Article 6 on the care, upkeep... 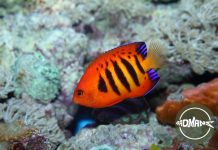 The Top Five Tropical Fish Food You Can Buy In 2022