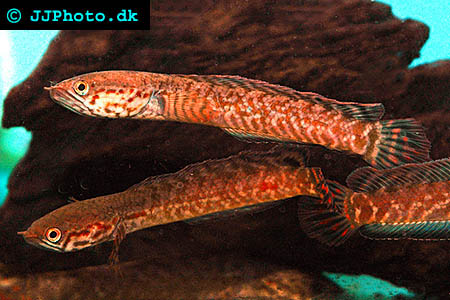 A lot of unusual in one fish! It’s only one of three fish lacking pelvic fins (the others are hagfish and lamprey,) it’s a carnivore considered peaceful enough for some community aquariums, it has to breathe through both it’s gills and labyrinth organ in order to avoid drowning, it’s small body is a riot of exotic colors and it’s broad head is covered with scales reminiscent of a snake. 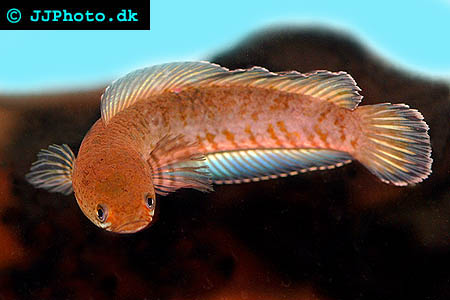 Coloration:The base color of the body and head vary greatly and include deep olives, red-ocher, and turquoise. A fine, cryptic net of brown-orange scales disrupt the shape of the body. Pectoral and caudal fins display vivid orange and black tiger markings. Dorsal and anal fins are turquoise proximally and red-ocher or dark brown along their distal edges. The dorsal fin is also marked with anterior-leaning, diagonal red-ocher/dark brown bars and often an eye-spot on the posterior of the fin. Multiple depths of iridescence create considerable flash and dimension over this fish. Coloring and patterns are much more intense in juveniles and continue to evolve over a lifetime, including a bright yellow to red-orange stripe running the length of its body.

Difficult. Sexual dimorphism: Males are larger and more colorful, females are fuller-bodied when in breeding condition. There are few details about reliably spawning this fish in captivity. They are bubble-nesters that need to be conditioned and rested over the winter, then acclimatized to the changing seasons in their native Indian habitat. The couple rub against to spawn. When the eggs are released, both parents tuck them away within a bubble nest then care for the fry when they hatch within 24 to 48 hours. It’s critical that the fry remain with the parents as they are feed feeder eggs and mucus excreted from the parents’ heads. In roughly 2 weeks the fry are free-swimmers and can move on to eating brine shrimp nauplii. 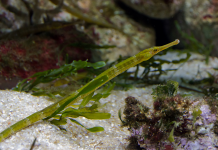 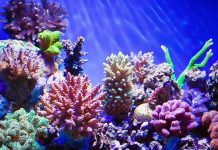