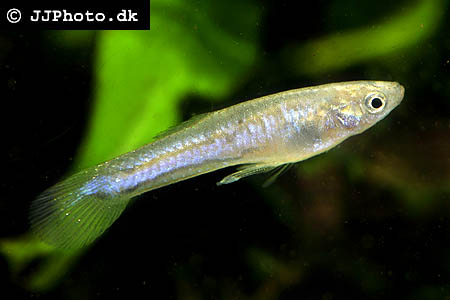 Breeding:Hard/Complicated. Sexual dimorphism: Males are brightly colored, have long, elaborate fins as well as having a gonopodium. Females have more muted colors, shorter fins, are more deeply-bodied and are nearly an inch larger than males. Aduts will eat fry, so a breeding tank is advised. Fill a 10 gallon (37.85 liter) tank with fully-cycled water (freshwater has been used, while brackish water is often cited as being more successful. One teaspoon of marine sea salt per 10 gallons is the recommended salinity.) Water should be maintained at 77°F. A substrate-free bottom allows the fry to be more easily seen and with a sponge filter, it helps the tank stay cleaner as well. Provide weighted plants and spawning mops. One week prior to spawning, feed adults a high-protein diet of bloodworms, black worms, and mosquito larvae. Add adults to the breeding tank in a 1 male to 3 females ratio. Where guppies would be indiscriminate at this point, things become increasingly discriminate and more difficult for Poecilia parae. Females are promiscuous and will mate with several males during a spawning. And males are not created, or treated, equally. In the wild, there are statistically fewer Red and Yellow melazona males. And in aquaria with all five male color morphs, females prefer to mate with a Red and Yellow melazona that wins a dominance battle. If red looses, the female chooses either the winner or the larger, more dominant male. If there is no battle, a red male is chosen. Females then chose mates in descending order of preference: (after Red and Yellow,) Blue, Parae then Immaculata. Immaculata is the smallest variant, and least likely to be invited to mate. However, it has stealthy tactic: when a red or yellow is displaying and has a female’s attention, drab Immaculata sneaks up behind or aside the female and and forcefully mates without her consent. Immaculas have larger testes that produce more sperm and all but ensures Immacula fry. After spawning, remove the males from the breeding tank. If pregnant, the gravid spot on females will darken and grow until frybirth. Gestation takes approximately 24 days. Typically near morning, the female will give birth to approximately 5-16 fry. The fry will quickly move into the protection of the spawning mops and plants. Remove the female(s). Feed fry crushed flake food, crushed freeze-dried worms or crumbled cooked egg yolk for the first few weeks to encourage growth. Females are sexually mature at 8 months, males at 6 months. In a tank with adults fry, Red and Yellow fry are more likely to be eaten because they are most easily seen, resulting in more Blue, Parae and Immaculata fry that reach maturity. 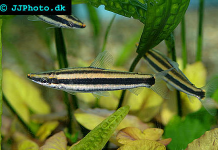 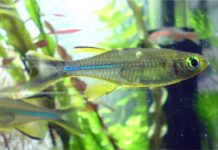