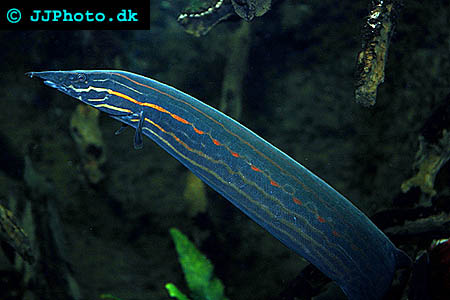 While fire eels require fish-keepers with experience, the investment of time and attention is returned in spades. These intelligent creatures with expressive faces and attentive eyes quickly build an emotional bond with their caretaker, from whose hands they often like to feed. 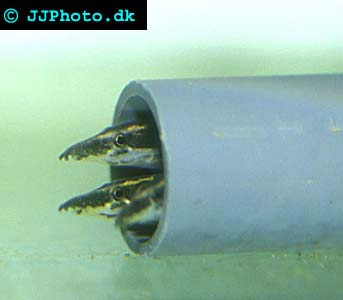 Thailand and Cambodia to Indonesia. Occurs in slow-flowing rivers and lowland floodplains.

General Body Form:An eel in name only, M. erythrotaenia has a long, laterally-compressed filiform body. Anterioraly, the body extends into a tri-lobed, pointed snout that over-archs the lower jaw. Posteriorly, the distal-most third joins the ribbon-like caudal fin to become an extended tail. It’s considered one of the “spiny eels” due to the stubby, notched or spiny dorsal projections that run down it’s spine.

Maintenance:Moderate. Because these fish are thin-skinned and have few scales, they are particularly prone to cuts and scrapes that can quickly develop into fungal or bacterial infections. Prevention begins with looking your fish over daily to ensure that if there are any bumps or bruises that you can treat them as soon as possible. Frequent large water changes remove detritus, keeps dissolved organics diluted and increases oxygen for overall health. These fish have a lot of flexibility when it comes to not needing very specific water parameters. So long as their pH and dH are within range, they adapt very well. These fish prefer larger tanks with soft, sandy bottoms or very smooth, fine gravel in which they can burrow themselves. Decor should have no sharp or jagged edges that these sensitive fish might bump into. Caves, rocks and sections of PVC pipe serve as alternate hiding places. Non-rooted plants such as anubias tied to driftwood, java moss, tangles of hornwort and floating plants provide soft, safe aboveground cover where fire eels can burrow in and feel secure while still being visible to the aquarist. Water should be slow-moving, high in dissolved oxygen and kept extremely clean. Peaceful to Semi-aggressive. A very peaceful community fish when kept with tankmates too large to be considered prey (as fire eels are nocturnal hunters.) Territorial in nature, it cannot be kept with spiny eels unless attempts at spawning are being made. Large, gentle tankmates might include clown loaches, tinfoil barbs, and plecos. 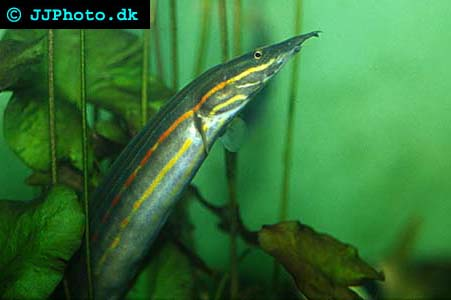 Breeding:Difficult. OVIPAROUS: A plant-spawning egg-scatters requiring a large, densely-planted tank. Sexual dimorphism: Difficult to tell. Generally females are plumper and are deeper-bodied. Triggers for spawning appear to be a slight increase in temperature (into the 81 – 84°F/27 – 29°C range) an increase in the availability of food and sizable water changes, all of which may replicate native monsoon conditions. During courtship, the fish will chase each other in tight circles for hours before the female releases 800 to 1200 eggs in floating plants or spawning mops and the male’s releases sperm to fertilize them. Eggs hatch within three to four days with the fry becoming free-swimming in another three to four days. Fry must be fed very tiny food in small amounts as overfeeding is a common cause of death. Suggested foods for fast growth include Cyclops nauplii, hard-boiled egg yolk and radiolarians. Regular water changes are essential for preventing opportunistic fungal infections among the fry. As a precaution, an anti-fungal agent gentle enough for the fry may be added. 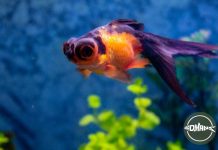 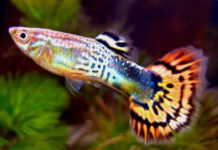 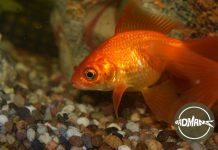 Goldfish Staying in Corner of Tank: How to Get Them to...