While often overlooked in stores, the Silvertip Tetra, once settled into your aquarium, is a striking fish. Its silver body is punctuated with shimmering scales that can take on a variety of colors under the right light.

Native waters are soft, acidic, low in mineral content, high in dissolved oxygen and have low to medium levels of humic acid. A medium to strong current is recommended. Black-water can be created by adding peat to your filter, by boiling dried leaves until the water is the color of tea and adding it to your tank or through the use of black-water concentrate. o replicate it’s natural environment, start with a dark, sandy substrate. Driftwood or twisted roots may be added for cover and a few dried leaves (oak or beech) scattered on the substrate. While aquatic plants aren’t found in it’s native environment, fine-leafed plants, like Cabomba, can be planted densely around the periphery so that the fish still have the central area for open-water swimming. Lighting should be low, possibly with floating plants to help shad the tank from the surface. A peaceful shoaling fish for non-aggressive communities. Very active. Tankmates might include corydoras and other small, peaceful catfish, danios, dwarf cichlids, gouramis, most livebearers, rasboras and other peaceful tetras such as the Buenos aires tetra, Rummy-nose tetra and Black neon tetra. Keeping H. nana as part of a shoal of a minimum of 5 fish is recommended as these fish are fin-nippers without the security of being part of a shoal. A ratio keeping 1 male to 2 females is advised.

In the wild these will eat small crustaceans, worms and daphnia. In the aquarium they will eat most anything offered to them. Such as, Daphnia, freeze dried blood worms, Brine shrimp as well as flakes and granules.

Easy. OVIPAROUS: Egg scatters. Sexual dimorphism: subtle, but both dimorphic and dichromic. Condition fish to be bred with high quality foods, particularly live and frozen proteins, for a few weeks prior to spawning. You will want to select females that are the most full with eggs and the brightest colored males to place in the breeding tank. As these fish are egg-predators, establishing a tank for breeding purposes is recommended. For a breeding tank, you’ll want to replicate the water conditions, include a sponge filter, bog-wood, plants and spawning mops to give the fish somewhere to lay their eggs. Lighting should be subdued and a few floating plants would create more shade as both eggs and fry are very sensitive to light. Large water changes of 50% or greater and keeping the fish in the dark and then gradually increasing the light are both help induce spawning. Once eggs are laid, adults should be moved back to their normal tank. Eggs hatch in 24 – 36 hours and are free-swimming 3 – 4 days later. Feed infusoria, hard-boiled egg yolks and rotifers for the first few days, switching to crushed flakes, hard-boiled egg yolks, microworm and nauplii for the next four weeks. Fry will show their adult colors and patterning in about one month. 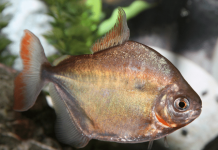