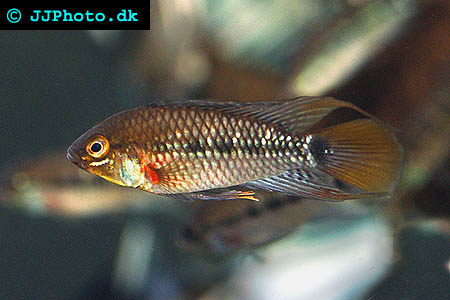 While Blue Cheek Dwarf Cichlids require fish-keepers with experience, the investment of time and attention is returned in spades. These intelligent creatures with expressive faces and attentive eyes quickly build an emotional bond with their caretaker, from whose hands they often like to feed. 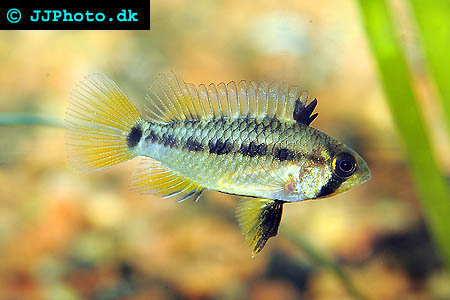 Amazon River basin, in tributaries to the Ucayali and Amazon rivers and in the Yavarí River in Peru and the Japurá River in Brazil. Occupies black-, clear-water and white-water conditions.

Coloration:Males: There are many color varieties available including blue and yellow. Of the blue variety, it is primarily bluish-grey body with luminous bright blue highlighting on the dorsal fin’s anterior spiny rays, pectoral, pelvic and anal rays. The dorsal fin’s spiny rays and caudal fin are bright yellow. A series of intensely blue lines trace the eyes and cheeks and jaws feature similarly intensely blue coloration. A thick black stripe traces from the front of the head to just before the tail. A black bar strikes through the center of each eye and extends through to the gill covers. This species may alter it’s colors (shifting mostly between blues and yellows) in response to a number of factors, including mood. Males and females are dichromic.

Maintenance:Moderate. Well-filtered, highly-oxygenated water with a mild current may either be left clear or changed to black-water using tannins leached from bogwood/driftwood, dried leaves aquarium-safe peat or black-water concentrate. (A secondary benefit of the wood and dried leaves is that aufwuchs form on their surfaces, providing food for fry.) An aquarium with soft, sandy substrate, multiple small caves, and both rooted and floating plants provides the comfort, security and dappled lighting these fish require. Branches and driftwood complete contribute tannins and create additional safe havens. Lower lighting is recommended. A peaceful addition to community aquariums. Both wild-caught and captive-raised fish benefit from having small dither fish as tankmates. Tankmates might include otocinclus, pencilfish, rasboras, cardinal tetras and other passive tetras. A. eunotus may be slightly aggressive with conspecifics, particularly during breeding. A stocking ratio of one male to one female is recommended. Overall, the tank should be lightly-stocked. 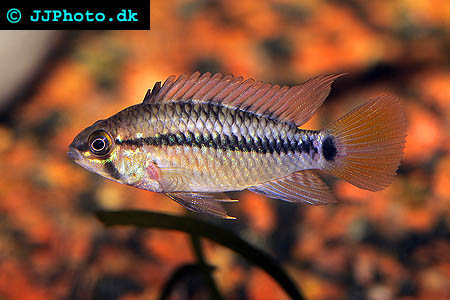 Breeding:Easy. OVIPAROUS. Cave spawner. Sexual Dimorphism: both dimorphic and dichronic– females are smaller, have smaller fins and are less brightly colored. Condition fish to be bred by feeding a quality diet high in proteins, especially live foods. A large water change may stimulate spawning. Females lay eggs on the ceiling of caves, under rocks or in crevices like those found in driftwood while the male defends the territory. Eggs and fry are tended to by the female parent. When hatched, fry are free-swimming and can be fed nauplii. If the male shows increased aggression toward the female, he should be removed to a separate tank. The sex of the fry is influenced by water conditions, with softer, warmer water producing more males. 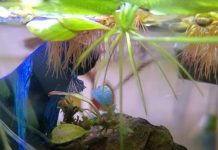 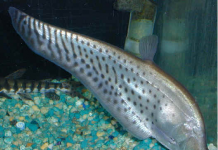 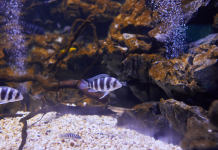 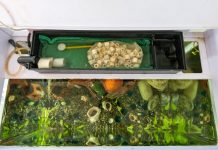