This rarer of Apistos can be found as either ‘blue’, ‘orange’, ‘red’ or ‘yellow’ depending on the locations where they’ve been collected. 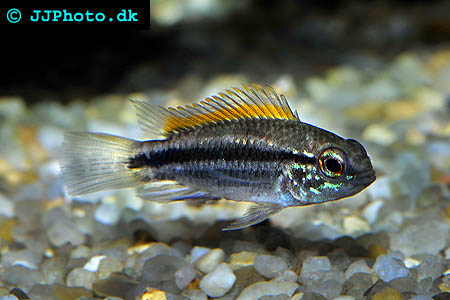 Coloration:Males: There are many color varieties available including blue, orange, red and yellow. In the blue morph, the body is blue-violet. The dorsal and anal fins are bright yellow-green, basal ly, and iridescent blue distally. The caudal fin has a center of iridescent blue and it flanked by yellow-green laterally. The pectoral fins are iridescent blue and just tipped with yellow-green. A thin, black bar strikes through the eye and extends across the gill cover. A bold black stripe extends from almost the tip of the nose, through the eye and traces the lateral line just past the caudal peduncle. A second line is variable and may appear just below this line. Sexually dichroic.

Maintenance:Moderate. It’s important to maintain the water parameters within their strict ranges. 40 – 60% weekly water changes and filtering the water through peat maintain the soft, slightly acidic parameters that keeps fish healthy and helps their colors stay bright. Water current should be gentle. The tank should be as long as possible. To replicate their native environment, provide a soft, sandy substrate sprinkled with a few dried leaves (beech, oak or Ketapang almond leaves) providing cover created from roots, branches, driftwood or bogwood (caves have also been made using clay flowerpots and sections of pvc pipe.) Lighting should be soft and the aquarium should have a open-water space provided for swimming. Water may be stained the color of cola or tea either by adding peat to the filter or adding black-water concentrate. Suitable plants include Cryptocoryne and Anubias as well as floating plants to dapple the light. Large aquariums (in excess of 48 inches long) may help reduce aggression and issues of territory. Semi-aggressive/Territorial. Excellent for a species-only aquarium or as part of a peaceful community tank where tankmates might include corydoras, otos, pencilfish, rasboras, swamp guppies and small tetras. Apistogrammas are territorial and require individual ranges per mated group to help prevent aggression. For a trio of 1 male per 2 females, allow a minimum of 11 – 15 gallons (50 – 70 liters) for territory. For every 1 male per 3 – 4 female harem, allow a minimum of roughly 26 gallons (100 liters). Larger aquariums and a greater number of fish help to reduce stress and aggression overall.

Breeding:Easy. OVIPAROUS. Cave-spawner. Sexual Dimorphism: both dimorphic and dichronic– females are smaller, have smaller fins and are less brightly colored. Prior to breeding, condition fish with heavy feedings of quality food, especially live foods. A large water change may stimulate spawning. As these fish are polygamous, a male may spawn with multiple females at the same time. Females lay approximately 100 eggs on the ceiling of caves, under rocks or in crevices like those found in driftwood while the male defends the territory. Eggs and fry are tended to by the female parent. In five to six days when they are hatched, fry are free-swimming. They can be fed nauplii and Anguillula aceti once the yolk sac has been absorbed. If the male shows increased aggression toward the female, he should be removed to a separate tank. The sex of the fry is influenced by water conditions, with softer, warmer water producing more males. While spawning is possible in a community tank, a breeding tank is recommended. 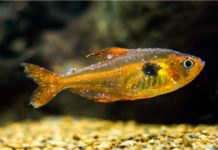 White Spot Disease: A Parasite That Can be Seen With the... 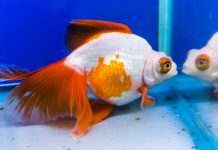