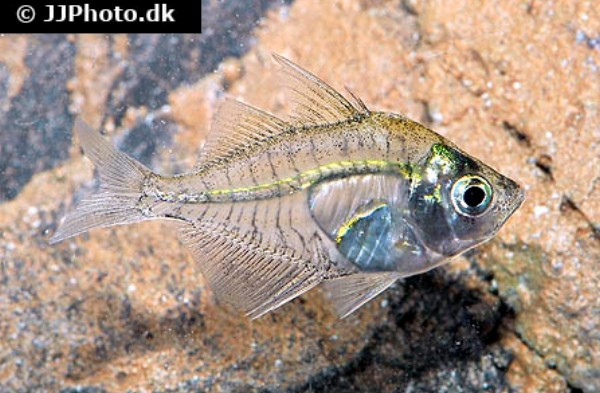 These beautiful and delicate fish have the distinction of being so transparent that their bones and internal organs can be easily seen. When kept in groups of 6 or more, their timid personalities are replaced by bold and curious natures. They can be easily kept in freshwater, and also have the option of being kept in very mild brackish environment.

General Body Form:This delicate fish is deep-bodied and laterally compressed. Fins are long and rounded with the exception of two separate, pointed dorsal fins; caudal fin is moderately long and forked. Back is arched. Mouth is small and dorsally-located. Forehead is indented slightly. Eyes are relatively large.

Note:Indian glassy fish have often been sold as having been “dyed” or “painted,” a process by which numerous injections of colored dye are made into the fish’s transparent tissue to make them more brightly colored. The process is cruel, far from painless, opens the fish up to opportunistic diseases such as fin rot, ich and Lymphocystis, and has been shown to shorten their lives considerably (from 6 months instead of their natural lifespan of approximately 5 – 8 years.)

Diet:Omnivorous (with preference for proteins): In the wild, this species feeds on crustaceans, earth worms and other invertebrates. In aquaria, P. ranga does best on a mix of live and frozen foods, including bloodworm, tubifex, brine shrimp, mysis shrimp and insect larvae such as glassworm. Flake foods are also eagerly accepted, but shouldn’t be fed exclusively. Feed small amounts once or twice daily.

Maintenance:These shy, nervous fish prefer a dark substrate with numerous hiding places composed of caves, roots, rocks, driftwood and plants. Whether you choose to go brackish or freshwater will have an impact on which plants you’ll have to choose from. Java fern and Java moss are both hardy enough for brackish conditions, they propagate well and are easily attached to driftwood, rocks or structures. For best success, low lighting (of 45 – 60 watts) is recommended. This might be accomplished by keeping the tank by a window with moderate morning sunlight. With higher light and the addition of CO2, both plants grow quickly and lushly, so ensure your water column contains the sufficient nutrients. Parambassis ranga feel most secure in groups of 6 or more, maintaining a ratio of one male to one female. They’re calm in mixed communities which may include similarly gentle species such as danios, dwarf rainbowfish, mollies, platys and other non-fin nippers in a freshwater aquarium. For very mild brackish conditions, chromides, bumblebee or knight gobies would make an excellent community. Only during spawning might the male Indian glassy fish become territorial, but it is rarely aggressive to the point of physical violence. This species does best in mature tanks, so ensure your tank’s been set up for a while before purchasing P. ranga.

Biotope:Brackish or Freshwater: Because this fish is found in both slightly brackish and freshwater conditions, the fishkeeper may choose to replicate either habitat (however more fish are found in freshwater distributions.) It’s recommended to ask the seller whether the fish has been kept in brackish or freshwater. In this way, if a change from brackish to freshwater needs to be made, it can be done gradually and without harm to the fish. Clean, well-oxygenated water heated consistently to 68 – 86°F (20°C – 30°C) best replicates riverine and lacustrine habitats P. ranga is native to.

Oviparous: Eggscatters: Moderately Difficult. Sexual dimorphism: Males have more pointed swim bladders, longer dorsal and anal fins with blue-gray edging and intensified yellow coloration over their bodies, particularly during spawning conditions (Females have more rounded swim bladders and more muted colors.) Spawning typically happens during the monsoon season during warmer weather when with rain softening areas of standing water. As Indian glassy fish are prone to eating their own eggs, it’s advisable to set up a separate tank for spawning and raising the fry. Optimal conditions would include a tank with a mature sponge-filtered keeping the water at approximately 84°F with light water current. It should be heavily planted with java ferns or similarly broad-leaved plants. Choose healthy females and place them in the breeding tank for at least a week prior to spawning. During this time, feed them a diet high in live proteins to help them develop their roe. Maintaining a 1 male to 1 female ratio, introduce males into the breeding tank at night. Spawning occurs at dawn when females scatter their eggs across the plants and males follow after fertilizing them. Remove adults from the tank as soon as spawning has been completed to keep adults from eating the eggs. Fungus on eggs is common and a few drops of methylene blue may help prevent this. Eggs hatch within 24 hours, fry remain attached to their leaves (living off their yolk sacs) for the next three to four days. Once they’re free-swimming, start by offering infusoria, working up to brine shrimp naupalii. At this point they’ll growing rapidly and can eat larger foods, so move larger fry to another aquarium so smaller fry aren’t out-competed for food. Frequent, gentle water changes are essential to maintaining the health of the fry and accelerating metabolisms.