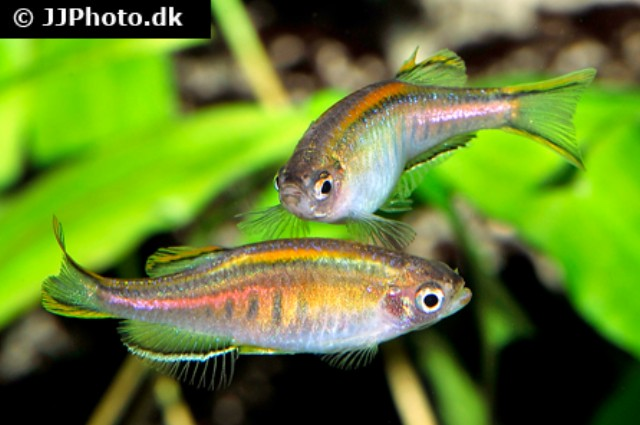 Asia: Irrawaddy in northern Myanmar. Occurring in streams and wells.

Diet:Omnivorous: Feeding primarily of insects and larvae in nature, in the aquarium, D. choprae eagerly accepts live and frozen bloodworm, brine shrimp, daphnia, tubifex, mosquito larvae and zooplankton as well as quality small pellet and flake variety diets (depending on the size of the fish, bloodwoom may need to be crushed slightly before feeding.) For best coloration, live and frozen proteins should be offered at least part of the time. Being tiny, non-competitive surface feeders, it may be best to use a feeding ring to contain foods during small once or twice daily feedings.

Biotope:Freshwater: In nature, D. choprae is accustomed to cool, wells and well-oxygenated running water in the form of streams.

Oviparous: Eggscatters: Moderate. Sexual dimorphism: Females grow slightly larger and more deeply-bodied and are rounder when gravid than smaller, slimmer-bodied males. Without intervention in a densely-planted aquarium, it’s possible for small numbers of fry will survive (although they’ll do so in absence of parental care.) For greater fry survival, a spawning tank may be established. A breeding tank– at least 10 – 20 gallons (37.9 – 75.7 liters)–with marbles as substrate allow the eggs to fall between the marbles and safely out of reach of their parents mouths. Additionally, your tank should have heated, mature water, a sponge filter and an air stone for oxygenation and circulation (the addition of baby grass, java moss or spawning mops is optional as the safest place for the eggs to fall is between the marbles.) At least a week prior to spawning, condition the parents on a diet rich in protein such as bloodworms, brine shrimp or tubifex worms which will help build roe in the female. When the female(s) to be spawned appear gravid (their abdomens will be distended with eggs and a small dark spot will appear just before the fish’s urogenital opening,) one or two pair should be placed into the breeding tank toward evening (as spawning will occur around dawn.) To encourage spawning, small amounts of cool water may be added to the tank every few hours. When ready, the female releases close to 20 – 50 eggs, with the male following, fertilizing the eggs as he swims along. D. choprae provides no aftercare for the eggs, so it’s best to remove the adults within 24 – 48 hours of spawning. Incubation of the eggs generally takes 24 -36 hours (sooner if the water is a little warmer,) during which keeping a tank dark can help reduce fungal growth. A dim tank will also help the fry which are sensitive to light. The fry being free-swimming within 6 to 7 days. Initially offer the fry green algae, small crustaceans, paramecium and protozoans common in aufwuch cultures, segueing to Artemia naupaii, microworm and crushed flake food in a week or so once the fry are large enough to accept the larger foods. 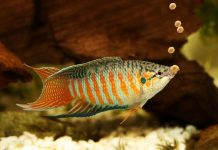 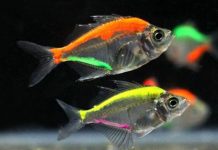 Painted Glass Fish: The Problem With the Dyed Fish 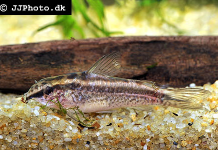 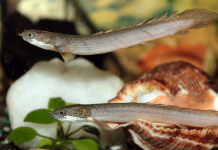 Dinosaur Bichir (Polypterus senagalus): How To Care For the World’s Living...