The Swordtail, one of the “classic” aquarium fish, has maintained its popularity throughout the years. Easy to care for and pleasant to the eye it’s easy to see why.

The males are elongated, with the adults having a long sword shaped Caudal fin extension formed from the eight lowermost fin rays. Females are more robust and lack the sword. In both sexes the Dorsal fin has a straight outer edge. There has been much cross breeding within the family to produce many different colors and fin shapes. Lyretail swords have an upper and lower sword and others have “high fin” Dorsal fins as well. I believe that the original wild form ids still the most beautiful and would highly recommend it.

Because of the vast array of colors we see today in the hobby, I will outline the coloration of the Original wild Green Swordtail. The upper-side is Olive-green with the sides being Yellow-Green highlighted by Brown edges. A dark stripe runs from the nose through the eye down the length of the body and in males along the bottom of his sword, giving it an underlining effect. Also on the sides near this stripe is an area of iridescent light Green bordered in Red, which under certain light conditions is stunning. The coloration of the sword itself can be Green, Yellow, Orange, Red or any combination of these colors. The Dorsal fin is a Yellow-Green color with one or more rows of Red dots. All in all a very nice looking fish even without the cross breeding.

An easily cared for fish that does well in all types of community aquaria. Give them a fairly large tank with live plants and open swimming areas, avoid too much driftwood as a rule the livebearers do not like acidic water. Although not a schooling fish they benefit by being kept with a large number of their own kind. Among the males there is a distinct hierarchy. Temperature range from seventy-two to eighty-two degrees. A very peaceful and hardy species.

Rivers in Mexico and Guatemala.

Young Livebearers are fairly large at birth and their development is very advanced. They can swim right away, which is needed to avoid their enemies including their parents who give no natal care whatsoever. The fry grow very rapidly and will eagerly accept fine flake food. An interesting fact on Swordtails is their ability to appear to change sexes. All young swordtails are female and if a potential male starts to develop early, he will continue to become a slender small male. If a potential male goes through a female stage complete with the typical female form and gravid spot, he will develop into a large thickset “late” male. 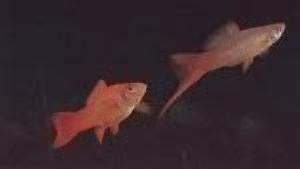 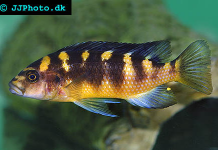 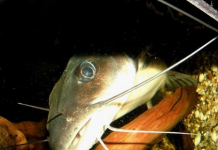