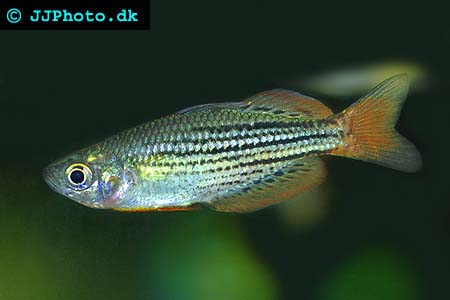 Probably the first aquarium fish from “down under” seen in the states. The Dwarf Rainbow is not a show stopper, but still deserves a place in any community aquarium. 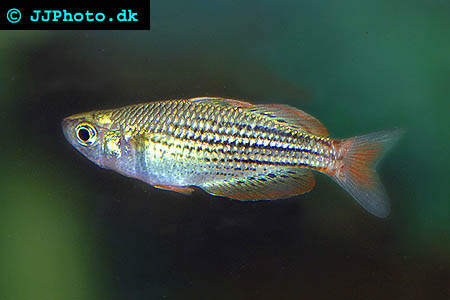 The coloration of the Rainbow depends on its sex. In the male the sides are a Greenish color with hints of Gold iridescence. At spawning time the sides can take on a Red hue. The gill covers also have this shimmering Green coloration, with a red dot and edged in Gold. The throat and underside are a dark Red in color and the top is a rather dull Brown. Seven Dark brown To Red stripes run down the length of the body with rows of pearly White scales in between them. The Dorsal and Anal fins are green at the base which blends into a Red hue. The caudal is also Red which also blends into clear at the ends. The female is similar, but the body and fins are paler in coloration. Not a stunning fish, but the more you look at it the more beautiful it becomes.

An easy fish to care for the tank should be as large as possible. In a well planted tank with open space swim the Dwarf Rainbow will be undemanding and happy. All kinds of food are accepted from flake to live. They are a schooling fish and should be kept in groups, being peaceful they can be housed with other community type fish. They are very oxygen intensive fish and need cooler water. Provide good filtration with a gentile current. Water on the acid side is best but they will adapt to other conditions.

The fish are sexually mature when about one inch in size. If properly conditioned with live food and pristine water the fish will spawn. The eggs are usually laid in the morning and are scattered in fine leafed vegetation. At home Java moss or spawning mops can be used. The eggs hang from the vegetation from shot filaments. The process can last several days and hundreds of eggs can be laid. At 77 degrees F. the eggs will hatch in eight to ten days. The eggs can be light sensitive and should be kept in a darkened aquarium. The fry at first will not swim for a day or two. Newly hatched bow fry are *far* too small to be fed crushed flakes. They need infusoria and/or vinegar eels for up to 2 weeks (species dependant) before they can be fed baby brine shrimp or microworms. *ALL* rainbowfish parents will eat eggs and fry. If you want fry, don’t leave the eggs in the same tank. Rainbowfish are top feeders and that’s where the fry hang out.

Community fish, what fish can you keep together in your aquarium

Articles on all aspects of tropical fish keeping and care.

Training a fish?, Article 65 on the care, upkeep and maintenance...