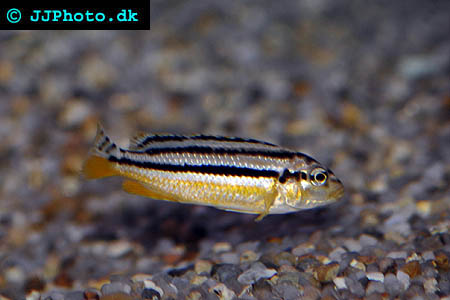 Coloration:The Auratus have two distinct coloration patterns differentiating the sexes. The females body is a golden yellow. She has a series of three Black to brown stripes running lengthwise down the body. These are fringed by White strips. The bands are separated with the Golden color of the body. The fins are also yellow in color. The upper part of the tail fin and the dorsal fin have black markings on them, with the tips being highlighted in Red. The male is completely different in color. His body is Black to brown in color. He has a Yellow stripe edged in white running the length of his body. The males fins are very dark Brown fringed in White. The top of his body is a mustard color which is followed up through the dorsal fin. The upper part of his tail fin has pale yellow spot. Looking at these fish you would not think that they are the same species. Another interesting aspect of the auratus is its ability to change sexes, in an environment devoid of males a female will switch sexes and become male. It has also been stated that the same is true of the males.

is an aggressive fish and intolerant of others in its territory. The set up should be a typical Lake Malawi biotope. Provide plenty of rockwork and caves with hard alkaline water with a pH of at least 7.5. The bottom substrate should be of a material that will aid in the pH buffering capabilities of the water. Good substrate choices could be Dolomite or crushed coral to aid in buffering the water. Tankmates should be from the same area and be able to fend off their attentions. Feeding is not difficult as they will accept all types of flake frozen or live. In their home territory they would graze of the algae covered rocks called Aufwuchs, so it is important to supplement with food containing spirulina and this should be given regularly.

The rubble and rocky area of lake Malawi.

Not really difficult, they are a typical African mouth-brooder incubating the eggs and protecting their fry in special sacs in the mouth. They are excellent and protective parents and have been known to raise young in crowded community set ups. During this brooding the female will not eat. The young fish will leave the mothers mouth after about twenty five days and be about 1/3 of an inch in length. They will accept all types of food and can grow quickly 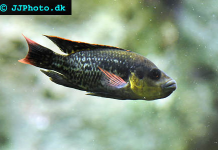 Starting up a new 75 gallon aquarium. 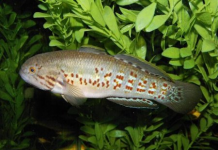