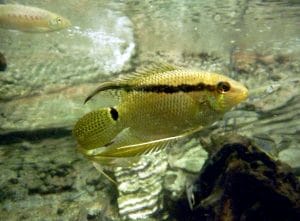 Another one of the original Cichlids we saw from times past. The Festivum is a peaceful and graceful cichlid that deserves greater distribution in our hobby. A nice compliment to the angel..

The Amazon area and Western Guyana

Coloration:The Festivum have many distinct coloration patterns. This is due to the fact that some sub species are occasionally imported and each has slight variations, mostly in the number of bands and how they are arraigned. Here are some of the variations. Mesonauta insignis has 7 faint vertical bars that these fish exhibit when stressed,the 2nd and 4th are joined and the scales above the diagonal flagbar are reticulated. M mirificus third bar is divided and there are think horizontal lines above the diagonal flag. M. egregius has the third bar divided into two. I will give a general description here. The most easily identified trait is the diagonal bar or “flag” that extends from the mouth, across the lower part of the eyes and then up to the soft part of the dorsal fin. The back or the part above this band is a dark shade of Brown. The rest of the body color is a Green-Yellow with a metal like sheen. Air the start of the tail fin there is a large Black spot outlined in gold and sometimes a similar spot is seen in the center of the flag band. The pectoral fins are colorless and the rest have an over-all faint yellow look interlaced with small spots. Sexing is hard, with the females being slightly smaller than the males.

and purchased small, not as older specimens. An all around winner for any aquarium.

Mesonauta species are widespread in South America, Inhabiting most types of waterways.

Reports of the Festivum have been reported, but no widespread process has been described. The sexes are difficult to tell, some say the males have longer fins. They are very selective when choosing a mate and several attempts might be needed before a pair is formed. They are the typical cichlid open breeder which spawns mostly on rocks and sometimes on the glass. Once a pair id formed they will remain faithful for life. 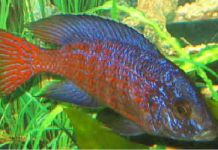 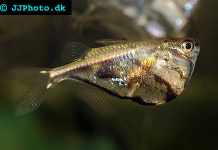