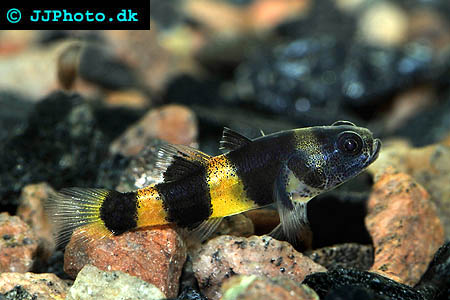 This popular little Goby is available from time to time. It is a brackish water fish that is not suited for a freshwater set up. Given proper conditions this fish can make an interesting addition to your brackish tank.

Coloration:The Basic background color of the the Goby is a pleasant Honey Yellow or mustard color. This color is marked with a series of Black vertical band and spots. Usually there are four main bands, The first runs over the fishes head near the eye. The next two bands cove the body and slightly on the fins. The final band ends at the start of the tail (caudal) fin. In between the bands There can be less pronounced Black spots. As the fish ages the Black tends to fade and the Yellow becomes more pronounced.

Maintenance:Feeding your gobies will be the most difficult part of maintaining them. They will eat only live food such as Brine shrimp, Daphnia, Cyclops and Mosquito larvae. Some have had success in getting the fish to eat frozen, however they seem not to recognize it as food unless it is moving. Although they can be kept in a community setting with other salt tolerant species ( Mollies or Platies ) they will remain shy and not flourish. They will be happiest in a species tank. Keep a fairly large number, ten or more, in the tank and provide plenty of hiding places such as stones tubes and caves. Plants will be limited to salt tolerant varieties and probably the best choice will be the die hard Java fern, plastic may be a better choice. The water should have a small amount of marine mix to increase the salinity. One to two teaspoons per two gallons should be OK. Although you do not want heavy circulation, aeration and filtration should be efficient.

Biotope:Brackish estuaries with plants as well as open areas of Southeast asia

Not one of the easier fish to breed. Condition the fish well with a varied diet of small live foods such as mosquito larvae, brine shrimp and Daphnia. I has been reported that breeding can be initiated by the addition of some fresh water to the tank. You should be able to tell when the fish are ready when the females become visibly plumper and male’s black bars almost disappear. The eggs are usually laid in flower pots, under rocks or in caves. The eggs are guarded fiercely by the male. In four to five days the eggs will hatch. The fry are very difficult to feed and should consist of liquid foods (infusoria ) and then baby brine shrimp. Once hatched you should move the parents as they tend to eat the young. The young will swim in all strata of the tank and after four to five weeks settle on the bottom and start to take on the adult coloration. 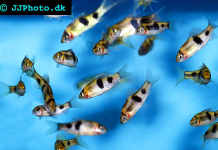 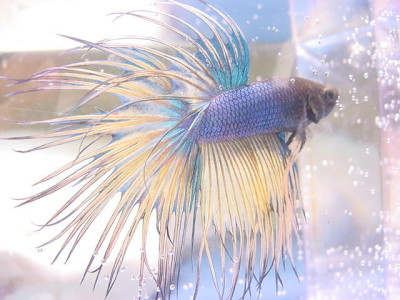 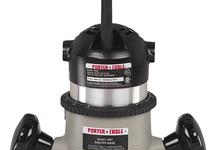 Tools for Working with Acrylic