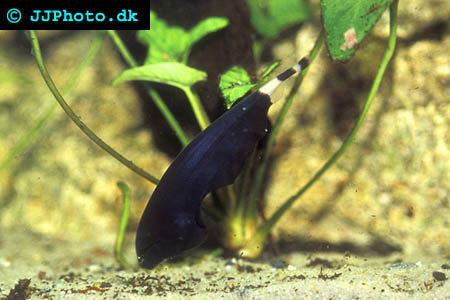 One of the most stunning and odd looking fish we can keep. The black ghost is sure to create a conversation. If you can meet its needs they can live for many years. 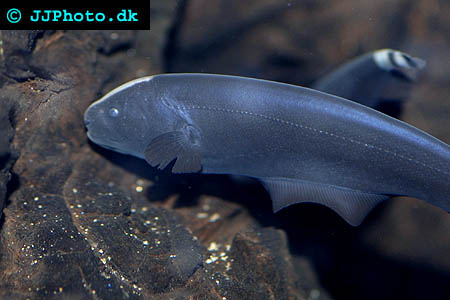 Coloration:The body and fins are a jet Black color, the base of the tail fin is marked with two wide vertical bands. There is a white stripe on the back starting at the head and extending about halfway down the body.

Maintenance:The aquarium for the Black ghost should be large with a small grained substrate. It should be fairly densely planted with many floating plants. The floating plants will help the fish overcome its shyness as it is nocturnal and sensitive to bright lights. Driftwood is also recommended along with some sort of inert piping for the fish to hide in. The water should be soft, and kept at a temperature of between seventy-five and eighty-two degrees. The pH should be neutral to acid. Feeding should be a mix of live tubifex brine shrimp and meaty frozen foods. The Black ghost is sensitive to water pollutants, changes in water conditions, and medications. Although timid they are aggressive to their own kind but can be housed with other large peaceful fish such as Angelfish, Discus and Gourami.

One of our readers hand feeding his ghost

Biotope:Found in fast flowing waters of rivers and streams with a sandy bottom

Little (or nothing) is known of their sexing and breeding habits. It has been reported that they are being bred in Indonesia

Note 1/21/2005 here is a report of breeding, the site has pictures of the fry G&S Aquarium

Anabantids, gourami and betta Fish Stats charts, how to care for...

Quick plant statistics for the Anubias barteri Round Leaf