A peaceful and one of the hardier Apistogramma, the Cockatoo is not the easiest to find but if you do they will provide enjoyment and splashes of brilliant color to your set up. 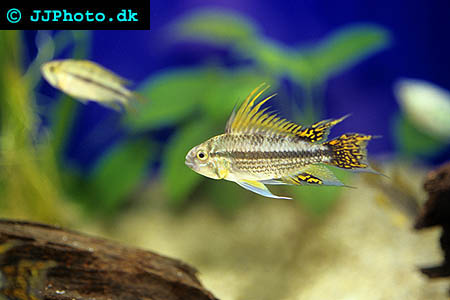 “The coloration of the males vary and come in many colors not just the triple red variety. That being said a triple red pair can have single, double, or triple red, orange, and yellow varieties in their fry. A single variety only has color on one fin (usually dorsal) and doubles have color on two fins and so on”.

Maintenance:The tank should be heavily planted and provide many caves and other hiding places. These fish Cichlids will not dig up your plants. A dark substrate will bring out the males bright colors and make them feel more secure. Roots, and driftwood will also make them feel at home. Water purity is a must and good filtration and a frequent water changing schedule is essential. Peat filters or a black water extract will aid in their care. Feed the Cockatoo with a variety of medium sized live food supplemented with a high quality medium sized flake or frozen product.

One of the harder fish to breed as their eggs are prone to fungus and are also sensitive to anti-fungal treatments These are harem fish and should be kept in a ratio of one male to three or more females. The Females will lay their eggs in a cave or other cavity. She will do all the guarding of the eggs and the male will patrol his whole territory. He may be breeding with more than one female at the same time The eggs will hatch in about four days and will b need to be fed very small food such as roftiers and infusoria. In another four to six days the fry become free swimming and will be moved to an open pit, They now can be fed baby brine shrimp and other small foods .If the male has spawned with more than one female the fry will intermix and be guarded by each female as if they were her own.

“As far as breeding is concerned, they are prolific, but usually are bad parents so fry usually don’t make it unless the owners get involved. In my experience the female will loose her zeal for guarding her fry and in a few weeks she wont protect them at all, but will allow them to stay in her breeding ground. This fish is very social and the female I have now lays eggs and once they hatch she passes the responsibility of raising them to her three oldest daughters. It is a crazy thing to watch. The males are the passive ones here and as long as he doesn’t haunt the female he should stay healthy.”

Tropical Fish Profiles, covering the care and upkeep of many aquarium...