Seen more and more at the local shops the Knight goby can be an attractive addition to your aquarium. 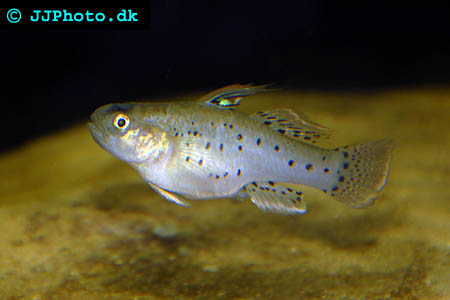 Aquarium Set-up:Territorial by nature, the aquarium should have plenty of places to to hide such as caves, driftwood and plants. They will defend their space and if you are keeping more than one extra care will have to be given as the are aggressive toward their on species. The aquarium itself does not have to be extra large a twenty gallon long would be great, aside from the above the substrate should be a sand material rather than gravel. Being sensitive to poor water quality you must have good filtration and a strong maintenance schedule.. Lighting is best subdued as they are timid in bright situations. Considered a brackish fish according to  fishbase   they actually prefer freshwater, be sure to ask your supplier the conditions they have been kept in.

Should not be a problem, prefers live but will take most flake, frozen, dried or sinking pellets

While not an active predator, the knight goby will eat smaller fish in the aquarium, being shy you would not want to keep them with overly aggressive species like the larger cichlids.

Occurs in estuaries and tidal zone of rivers

No wide scale successes, sporadic reports of breeding are reported with little luck of raising the fry. It is thought that rotifers would be the first food of choice.

I have never kept this species but one reader has had the following experiences. They are awesome fish I’ve had 6 for about 2 years. They like any kind of worms black,blood,tubiflex .And about the brackish water you should check with the shop you got him from and see if he was bread in brackish or fresh but a little salt wont hurt any way. They also like a high Ph about 7.2 to 7.8 any ways they are awesome little fish but if they are not fed lots they may go after the other tankmates fins. 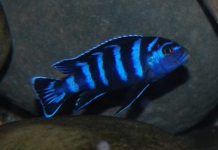