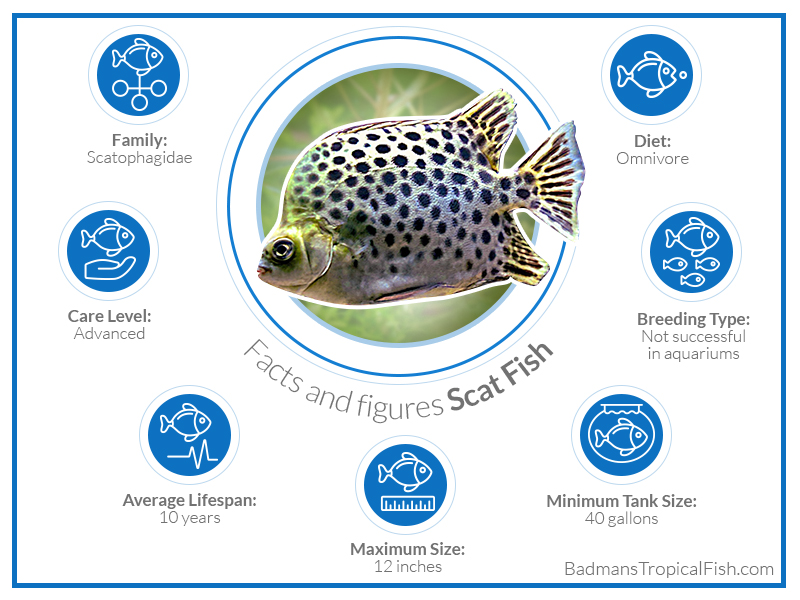 Scat fish, also known as Scatophagus argus or spotted scat, are fresh- brackish/marine water fish originally from the Indo-Pacific. As their name implies, the species are brown spotted but have various colors, silver, greenish, and reddish-brown.

Aquarists consider them a hardy breed because they can inflict injuries to humans and their varied water conditions range.

Read about the scat fish’s true nature, details about their care routine, breeding them in an aquarium, and the ideal diet.

The argus fish is also scene und in streams or estuary in Australia, Japan, Sri Lanka, Africa, and New Guinea.

They are large, appear roundish, and have a tiny slanted head region. Their dorsal fin is parallel to the lateral line. It has a condensed body profile, and the dark dots on its body appears near its fins.

The scat fish lifespan is affected by how you take care of them in the aquarium. They can live up to 10 years.

The scat fish are curious social animals; they hardly ever run or hide except when larger fishes are harassing them. They are outgoing, bright, and would frequently move their dorsal spines.

When introducing your scat fish into a tank, put the smaller-sized fish first before the argus fish or add them all at once. Alternatively, introduce live food like brine shrimp or blood worms to distract the inhabitants of the aquarium.

Test the water gravity with a hydrometer to compare it with their former aquarium parameters. It is wise to quarantine new fishes before you introduce them into a community tank.

It helps regulate disease outbreaks if they have an infection or active parasite. Ensure the difference in the receiving system is similar, so they adapt correctly to their new home.

Also, allow them to feed properly or rest as they may be stressed and quickly become prey in the community tank. Furthermore, you can perform the dipping technique or bathe the argus fish before placing them in the aquarium.

To care for a scat is complicated because their needs change as they mature.

You are likely to find scat fish in estuaries because it migrates between the two water bodies. For an aquarium raise one, the scat fish care is similar. Regulating the water’s salt content may not be an easy task for a beginner; knowing the correct quantity is key. You start with fresh water when they are at the juvenile stage and gradually transfer them to brackish water.

Their eating habits are insatiable. They mess up the aquarium water quickly, yet they even eat up feces in the tank. Nevertheless, you have to frequently change 30 percent of the water weekly and thoroughly clean the substrates to prevent food decay. Rotten meals boost the presence of nitrates in the tank, and the juveniles are sensitive to it. Be sure to replace the salt content in the right proportions as you perform water changes.

The scat dwells in waters with a temperature range of (72.0-82.0)°F or (20.0-28.0)°C, and the PH range should be between freshwater and brackish or marine water like 7.5-8.5. They enjoy average water movement, and water hardness ranges between 12-18 dGH. The water condition should remain alkaline as a drop In the PH can cause destruction.

To regulate it, some seasoned brackish hobbyists put in one pinch of baking soda once weekly. A chalky substrate like ground coral, aragonite, or dolomite can help regulate the water’s alkalinity. Experienced aquarists have successfully bred a mature scat in freshwater tanks. Still, it is ideal you keep them in saltwater.

To make a brackish water mix for a juvenile scat, put in 2 teaspoons to a gallon. The water salinity should not change because it affects the argus fish osmoregulation and its natural filtration content’s metabolic quality. A scat would likely fall sick if placed in an abruptly changing water environment.

The spotted scat is calm but energetic. At some stage in the scat fish lifespan, you have to supply its tank with seawater. The scat grows as large as 15 inches in the sea, but an aquarium-raised scat fish growth rate is 12 inches at its maximum. The length of the scat clearly shows you that your tank must be big enough for them to swim around comfortably, like a minimum of a 40-gallon tank.

The scat fins have venom spikes that can result in dizziness and pain in humans. As you clean the tank, take special precautions to avoid it. But if you get hurt, immerse the injured hand in hot water. The argus fish are middle strata dwellers and require medium lightening. There are usually no plants to block off excessive brightness. The scat fish substrate can be sand or smooth gravel.

Add in branches, driftwood, and roots as tank accessories or shelter, but do not put plants unless they are food as they would feed on them. Most plants would not even survive in the saline water, so you can opt for artificial potted plants and rocks to decorate. 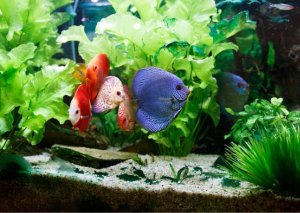 The scat fish are aggressive about food and would chase down any co-specific fish that disturbs their feeding. The spotted scat lives peacefully with most fishes, except they are too small or too big. The ideal juvenile scat fish tank mates suggestions are orange chromide, molly, dwarf neon blue rainbow fish, juvenile green chromide, swordfish.

The scat would weigh a worthy opponent or meal by the size of its mouth; if the fish can fit in, it would eat it. Their co-specific bothers them when they see them around, yet they always like to be part of a school. They do not mind a group containing at most four co-specific or a mono breed mix.

Monitor cases of bullying as it can get awful to the point the tankmate gets starved or is constantly chased. For the mature brackish water scat fish, its tank mates can be the mono angelfish, archerfish, green chromide, brackish water bullies, mono sense, and orange chromide. They are all active, and the scat fish would not easily bully and eat them. Scat fish is a reasonable choice for other saltwater fish.

The argus fish eat smaller fishes because they consider them a food source, like in the wild. The scat fish does not live calmly with aggressive species; instead, they feel threatened by them. Argus fishes disturb and chased down fishes that swim slowly.

There has been no successful report on the scat fish breeding in aquariums. Also, there is not much information on what triggers breeding in the fish, whether it is the water conditions and the parameters.

Aquarist or commercial aquariums capture the young scat fish from the brackish water and keep them in tanks to sell it for personal use. However, hobbyists claim these anadromous fishes can reproduce in saline waters. The juveniles swim towards the freshwater or estuaries to grow. They only return to the coral reef at full maturity.

The name Scatophagus argus implies the scat fish eats the feces of other fishes. It means the scat would pretty much eat anything and are active feeders. However, they are omnivores; they eat frozen, live, or flaked food and vegetables. They would eat plants in their aquarium and other types of greenery.

You can tame your scat pet fish, so they feed on virtually everything you feed them but make sure the vegetable diet is more than the carnivorous diet. The vegetables eat zucchini, spirulina fish food, spinach, frozen peas, fresh seaweed, lettuce, vegetable-based flakes, cucumber slices, and algae chopped up prawn, krill, earthworm or bloodworms and shrimps (brine and Mysis) as life or meaty food.

You have to boil or blanch strong vegetables, so the scat fish finds it easy to chew. In brackish waters, the scat fish diet includes plants, insects, worms, and crustaceans. Be sure to feed your twice daily, or they would get aggressive and destructive. Start their diet with affordable products and food because they eat a lot. Finally, if your argus fish is not eating, then something serious is wrong.

The scat fish is prone to fall sick, particularly in a poorly simulated environment with notices and parasites. Some scat fish diseases are velvet or coral fish disease, tuberculosis, and lymphocystis.

When you hear the name velvet, it sounds cute, but it is fatal. It is one of the widespread scat fish diseases; it also occurs in other species of fish. It spreads fasts and can result in a tank outbreak.

Amyloödinium ocellatum parasite is the cause of the velvet disease. A scat fish can contact velvet due to poor and dirty conditions.

The parasite contains chlorophyll, and it occurs in both fresh or salty waters. It attaches to the scat fish using the pseudopodia and enters the skin to feed on and damage fish cells. It matures and leaves the fish and releases a tomont which splits into hundreds of cysts. The cysts, in turn, infect other fishes and dies off if no host available.

The velvet infection also affects the gills of the scat fish. It spreads to other fishes in the tank, including a juvenile scat fish.

The parasite contains chlorophyll, so it depends on the light; little or no light source can destroy it. In addition, the increased temperature hastens the parasite’s life cycle, so they are less chance of reoccurrence.

The aquarium salt causes the scat fish to generate more mucus than it usually would help get rid of the parasite quickly. It also reduces the osmotic pressure in the water. The absence of the carbon filter system reduces the activated carbon’s chances of getting rid of the medication in the aquarium.

A scat fish’s behavior is not as violent as the cichlid species; you can tame them gradually.

However, the challenge might be regulating the water salinity even after frequent water changes. Suppose you read through our water parameters above and follow the directions. In that case, you can maintain a healthy scat fish to its maximum size. 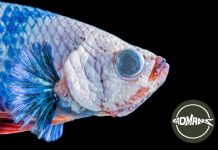 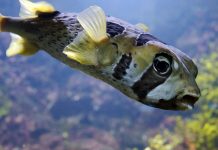 Amazon Puffer: A Community Fish or Just Another Aggressive Puffer?