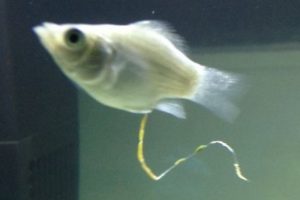 That little string hanging from fish is there either because of parasites or an inadequate meal supply. However, there’s nothing to worry about, since you can treat your fish easily in both cases. We consulted our fish experts and gathered the best techniques on how you can deal with the poop hanging from fish. So without further ado, let’s get right into the topic.

There are two most common reasons as to why your fish might be experiencing white thread-like poop. The first reason could be constipation, while the second reason could be internal parasites, which is rare in most cases.

Let’s look at how you can identify them and treat them!

You probably already know what it means to be constipated, but the easiest way to understand it is that constipation occurs when it is difficult to pass out stool or due to diet changes and insufficient fiber consumption. Indeed, that is the case even when it comes to fish! Let’s see how to find and treat it.

How do you identify constipation in a fish? If your fish is constipated, you will notice bloating and long, white string-like feces hanging from it. Whereas, if your fish is in perfect health, the poop would be in small pieces, will quickly fall on the substrate, and dissolve in water rapidly. Moreover, your fish would lose appetite, seem lethargic, and be behaving oddly.

If the constipation is not treated timely, it might be challenging for your fish to swim and, as a result, they would just be lying on the substrate or in their caves. People often mix constipation with dropsy, and although both have more or less the same symptoms, dropsy can be relatively prominent and dangerous.

In dropsy, your fish would experience raised scales, and certain parts of its body would look like the top of a cone when seen from above the leveled angle.

The primary cause of constipation is diet. Fish need a sufficient amount of dietary fiber to keep the bowel movement functioning properly. In case of fiber deficiency in a fish’s diet, the fish itself would be sluggish, prone to constipation, and refuse food of any kind.

Our guts are responsible for helping the excretion pass out by providing the mucus-like cells that ensure smooth sliding of the poop. If your guts are not providing the required lubrication for some reason, you won’t be able to slide out a single drop of excretion.

All the waste will swell up inside the guts, and in case of no immediate treatment and the worsening of the situation, the result would be unfortunate, and you could pass out.

The same is the case with a fish, and although there are few chances of a fish from freshwater becoming a target to constipation, they could use some help with pushing that white string out. Only in the case of healthy fish poop, the mucus is transparent and often goes unnoticed because its color turns to the color of whatever pellets you have consumed earlier.

When the fish hasn’t consumed anything in a day or two, you would then notice a slimy, white string hanging from the fish hinting at you that its stomach is empty. The white poop isn’t really what it seems; it’s just mucus coating passing out of the fish’s body, other times also known as an empty fetal cast.

Now, the first thought that’d enter your mind upon seeing the white string would be to starve the fish, so its stomach gets back in place. And yes, in most cases, this trick does work. However, when your fish is sick, it needs a proper diet to get back its energy.

To treat fish constipation, you need to add laxatives to the fish’s diet, including high-fiber food. One thing to be absolutely vigilant of is not giving pellets, frozen food, or flakes; all of these worsen the condition. Also, while treating fish constipation, you need to maintain its regular diet and avoid adding any other nourishment than the already-existing one.

A good high fiber diet for fish includes tinned peas and you can use them either squashed or as a whole, depending upon the species of fish under discussion. Furthermore, you can add plants like Egeria or Elodea or chitin food like shrimps, lobsters, or tiny insects to their diet.

To ease their pain, sprinkle some Epsom salt in the water tank as it is a muscle relaxant and isn’t harsh. It is the best way to loosen up the stiffened muscles when dealing with mild to severe constipation. Depending on the severity of the problem at hand, you can add more than two teaspoons per four gallons of water or as needed. 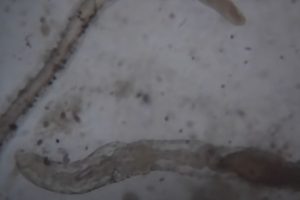 No fish owner wants to see the long string hanging from fish once it has been treated. Hence, to make constipation treatment impactful, you need to follow some prevention techniques. These are inexpensive and are simple enough to understand.

If you are parents to fish like surgeonfish and parrotfish, try adding more green food to their diet. This can include thinly sliced cucumbers, plants like Egeria and Canadensis, small chunks of spinach and lettuce, etc. Also, try avoiding feeding the fish, flakes, or pellets by at least 40 percent.

Fish like metynnis argenteus, goldfish, loinhead, and golden cichlid are well off with terrestrial plants, vegetable flakes, and green food like peas, chickweed, squash, lettuce, etc. Adding these plants to the aquarium before leaving for work is the best way to ensure that your fish are well fed throughout the day.

If you have freshwater fish, it’s better to use nori (dried algae sheets) rather than terrestrial plants. Since nori is extracted from marine algae, it is the best edible seaweed you can get your hands on. It is cost-effective, and you can easily find it in local stores or look it up on the internet and order it to your home.

If your fish has been excreting yellowish-white and lump-like poop, there is a 90 percent chance it is dealing with a parasitic infection. The other 10 percent could indicate a change in internal conditions, some injury, or an increase in stress. Let’s see how to identify the existence of a parasite and how to treat it.

The most dangerous parasitic infections have white, long stringy fish poop, including roundworms, tapeworms, and Hexamita. These are relatively easy to identify as the string hanging from fish turns into a more yellow-like color, is stubborn, long, and stringy-like. If you see the poop of the fish floating in water against the water flow, pay strict attention.

Yes, the excretion of a fish is light and hits the substrate as soon as it leaves the body, but if your fish is infected with parasites, the poop would seem in motion even in still water. For better observation, you can try taking a specific portion of the water with the string in it and adding it to a clean glass.

If the string moves even in still water, know that it is a parasite. Check your fish for unusual changes like sluggish behavior or loss of appetite. You might even notice lesions on the flanks and head of your fish due to Hexamita. During parasitic infection, the fish starts becoming paler, and its head becomes darker.

Parasitic infections are not as prevalent, especially in pet fish, unless your fish was brought from outer waters or came in contact with another caught-in-the-wild fish. Otherwise, there are little to zero chances of your fish catching a parasitic infection while in an aquarium.

– Treatment From Parasites in Fish

The best treatment for fish with parasitic infection is to treat it with Flagyl, also known as Metronidazole. The fish should ingest the medication as it works faster, but in severe Hexamita cases, fish stop feeding your fish anything. You would then need to mix the drug in the aquarium water for three days in a row by giving one dose of it every 24 hours.

We would suggest checking with your vet before giving your fish any type of medication, just to make sure.

So far, we have covered the two primary reasons for string hanging from fish in detail. Let’s sum all the information up, so you don’t miss out on anything:

Fish are undoubtedly one of the loveliest, friendly, and mood-changing creatures, and when they are in pain, it’s almost like you can feel their pain especially for us empaths out there. So the next time you see a string hanging from fish, you will know what to do to help them out. 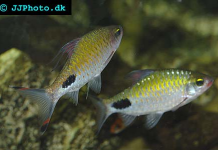 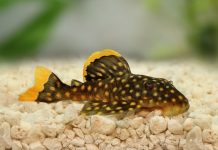 Signs Your Pleco Is Dying: How To Know When Your Fish... 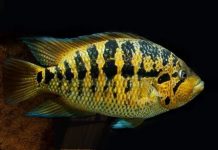