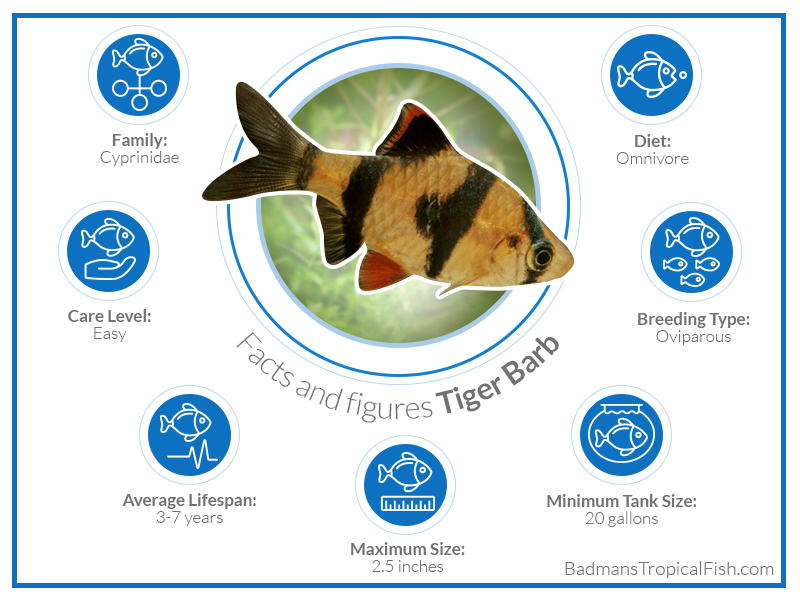 The species have beautiful body coloration and patterns that closely resemble the Sumatran tiger. They are mischief-makers which you would often see nipping at fins of slow-paced fishes.

Nonetheless, this article discusses how to care for and breed your tiger barb pet fish.

The tiger barb is distributed in the water bodies of Malaysia, Borneo and Sumatra, Kalimantan, Cambodia, Suriname, Thailand, Sarawak, some parts of Southeast Asia, parts of Puerto Rico, Australia, and the United States. 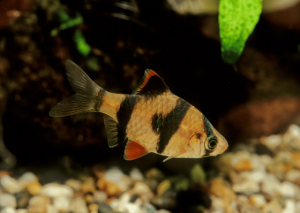 The tiger barb species have thick bodies with prominent significant features such as its caudal Pendicle. It is elongated at the center then gradually becomes slim like a triangle.  The tiger barbs do not have barbels.

The tiger barbs body coloration is beautiful. Its background color is either rose gold, gold, or a yellow shade. They have four thick stripes that seem to cover most parts of their body. One of the tiger barb stripes runs through its eye region while another stripe is at the fluke area. The third marking is at the caudal fin area and the last stripe at the black-colored dorsal fin.

The tiger barb’s abdomen is a cream shade with hints of yellow, while its back has some red tints. The front of its head is brownish-red.

A wild bred tiger barb can measure up to 4 inches, but a tank bred tiger barb is usually around 3 inches. The tiger barb species are bigger than most small fishes, so big predator fishes cannot eat them easily. However, they are not too large to be part of a fair-sized aquarium community.

In captivity, the average tiger barb’s life span is between three to seven years. Yet, they may live longer depending on their feeding and the accuracy of care they receive.

The male and female tiger barbs have some predominant features to differentiate them. The females are larger and stocky around the abdomen. But the male tiger barbs have brighter coloration and are slimmer than the female. Also, they develop a red-colored snout while breeding.

The tiger barb is a hostile and dominant fish species. They are active swimmers that would intentionally bump into slower swimming fishes and nip at their fins. The mischief-maker’s behavior is more unruly around a few per tank mates, but they tend to act better in bigger groups.

Hierarchy is crucial to the tiger barb breed as they would always compete for dominance in every school they belong to. Furthermore, they are very social and would hardly hide away from others except when they feel threatened. To get the best of your tiger barb pet fish, put about 8-12 co-specifics into an aquarium and watch them peacefully shoal.

However, the tiger barb does not like being on their own; they will become shy, depressed, and stressed. They would also spend their days hiding in aquarium shelters. The tiger barbs are middle strata dwellers; they tend to swim a lot in the open areas in the mid-levels, mainly if their tank is not overcrowded with plants and decoration.

The tiger barb care is minimal and straightforward. You should cover the aquarium because the active tiger barb would jump out at an opportunity; use a secure lid.

If you pay attention to the details we discussed below, you will spend long, happy years with your feisty fish pet.

The minimum tank size for the tiger barb species is a 24-inch aquarium. They require at least 20 gallons of water and ample space to show their fun side. The tank has to have room to contain several tiger barbs because they act better in groups. However, be sure you have a balanced biological load in your preferred tank.

Aquarium plants are crucial to tiger barbs, even if they are social. They sometimes need some quiet space to rest or hid from large predatory tank mates. A planted tank would also help reduce the intensity of lights, particularly during breeding.

In the wild, the tiger barb habitat contains a lot of algae and plants. You can simulate their environment by encouraging algae growth in the tank. Add in smooth stones or rock as they permit algae to grow on them.

Furthermore, the aquarium plants provide oxygen in the water, thereby purifying it. It also serves as a food source for the tiger barbs and provides the proper nutrients they need to flourish. Some ideal tiger barb plants include dwarf hair grass, water sprite or Ceratopteris thalictroides, java fern, Sagittaria subulata, and the corkscrew Val.

The decor should include caves or aquarium toys like a sunken ship or castle. They give the tiger barb shield from time to time. Add some driftwood into the tiger barbs aquarium; they play around with it and serve as a shelter.

The substrate is not crucial to the tiger barb species’ well-being because they stay primarily in the tank’s middle levels. However, for aesthetical purposes, a sandy substrate looks right for the tiger barbs tank, and it mimics their wild habitat. Needless to say, you can use smooth gravel or pebbles and rocks as well.

The tiger barbs need a lot of fresh water in their tank. Be sure to fill it up and then perform water changes often. You can fill the aquarium up to the filter weir level, so the clean filtered water returns into the tank effortlessly. It helps reduce the water turbulence caused by pumping, and it curbs the loss of carbon dioxide in the water. Remember, the aquarium plants take in carbon dioxide during photosynthesis.

Tiger barbs require minimal lighting, so you can opt for a natural source by placing your fish tank in an open space. Nonetheless, an artificial source would suffice for an indoor setting to ensure plants and animals get what they need to remain healthy. For example, you can use a standard aquarium of 40-W fluorescent or a 150-W aquarium light. Set both light sources, so they efficiently serve without emitting too much heat.

The tiger barbs can thrive in tap water only if you condition the water. You have to dechlorinate the water using an efficient water conditioner to eliminate the toxic chemical composition present. Tiger barbs like their aquarium water temperature between 68°F to 78°F or 20-25°C.

You can use a water heater of about 200-W to regulate the water temperature. A heater is beneficial for cooler seasons, like winter; it helps you keep the temperature stable. The PH range of the tiger barbs water should be between 6.5-7.5 while maintaining the water hardness between soft and medium with a PH range of 3.0 to 10.0.

Their natural habitat has many rotting plants, trees, and wood, which causes it to be acidic. Therefore, even as the tiger barbs accept a wide range of water conditions, it is ideal they have mildly acidic water. Also, purchase a reliable testing kit to get good readings to help you monitor their water requirements. 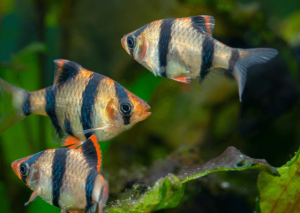 Picking an ideal tank mate for the tiger barb is tasking. Their mischievous behavior makes it challenging to get compatible tiger barb tank mates. If you want your community aquarium to flourish, do not put sluggish fishes with the tiger bar. It is because the tiger barb would chase them and nip their fins.

However, the continuous nipping would not cause physical harm, but it stresses the fishes. If a tiger barb is in an aquarium containing single species, they are more hostile and lash out at other fishes. Therefore, it is the best option to pair them with fishes of the same size and have similar behavior traits.

Generally, the tiger barbs would stay with appropriate freshwater fishes like the barbs with five or six bands.

To reduce the tiger barbs’ aggression towards other fishes, put in the tank mates first before adding them. This is because the tiger-striped fish see new fishes as territory intruders.

The tiger barb breeding in a tank is straightforward. They pair with each other temporarily during breeding and pick another mate for the next spawning session. They become mature as early as seven weeks and reproduce many times through life.

To increase the success rates of breeding in tiger barb species, it is ideal you feed your pet fish properly with a high-proteinous diet. To breed your tiger barb, take these tips below into consideration.

After conditioning the breeding tiger barb, place them together in a tank so they pair. Conditioning means to set aside mature fishes and feed them nutritious food before they breed. Multiple pairs of tiger barb fishes can breed simultaneously in the tank.

The female tiger barb is oviparous; they lay eggs between aquarium plants or the tank’s substrate. They can lay up to 700 eggs during one spawning session; the egg would then float up and stick to the grass blades or substrates. They look translucent with a faint yellow coloration.

The male and female tiger barbs will likely eat the eggs if you do not remove them from the tank after spawning or use a spawning grid. Alternatively, you can set up a different tank to raise the baby tiger barb as the eggs can drop out of the spawning grid. But, again, using similar water conditions creates the perfect environment for them.

The eggs incubate for 36 hours to two days and hatch; then, tiger barb feeds on their yolk sac for the first five days of their life. Afterward, when they begin swimming around the tank, you can provide the baby tiger barb (larvae) with some brine shrimp for at least three days.

As they grow, you can switch their diet to infusoria, commercially produced fry feed or powdered fish food, fish flakes, and micro worms. The baby tiger barb begins to gain its distinct coloration after one month, and when they are three months old, you can differentiate the male tiger barb from the female ones.

The tiger barb diet varies as they eat both plant materials and fleshy meals. When in captivity, they eat anything you give them. However, you need to think thoroughly about their meals as they need balanced and nutritious meals. They may get sick and lose their bright coloration when you do not feed them well.

Some foods to consider while feeding your tiger barb are pellets and fish flakes; they both can serve as their primary meals. In addition, you should infuse protein meals into their diet like aquatic invertebrates such as blood worms, brine shrimp, beef heart, and water fleas. Lastly, these cool water fishes need vegetables, adding some blanched lettuce, zucchini, and cucumber.

Vegetables help the tiger barb species remain healthy and boost their immune system, so they are less susceptible to diseases. However, an over-fed male tiger barb can develop obesity after continuous diets contain high calories.

The tiger barbs are social fishes that display a lot of behavioral traits. To enjoy a fascinating view, get different tiger barb colors and put them together in a heavily planted aquarium. 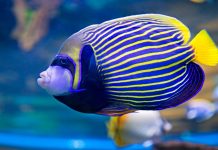 Emperor Angelfish: Get To Know This Reef-associated Fish 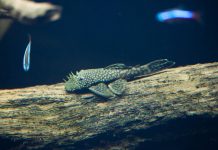