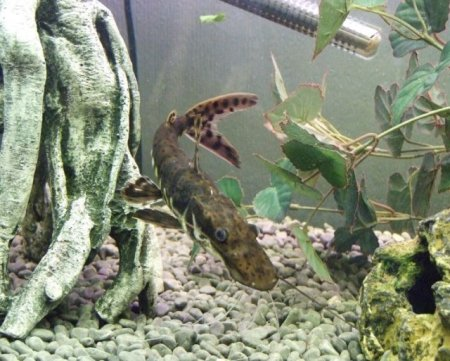 The Tiger Shovelnose Catfish is native to the extensive river basins of South America. This freshwater species is rather popular with fishkeepers thanks to its spectacular size, and naturally, there’s a demand for viable info about its special care requirements.

To help our readers, we found ourselves contacting our experts to unearth relevant data about the species. Our feature will touch upon all the specifics of taking care of Tiger catfish and more!

While most beginner fishkeepers will only focus on care routine and requirements when deciding what species to get for their home aquarium, it’s also essential to know a species’ statistics.

For instance, how quickly do baby Tiger Shovelnose Catfish grow, what’s their lifespan, etc. Luckily for you, we haven’t forgotten. Scroll down to discover what kind of numbers you’ll be facing with the Tiger catfish.

Another reason why the Tiger catfish are a challenging species for beginners is that they’ve got a pretty fast growth rate.

If they get all the nutrients they need, along with ideal living conditions, these not-so-little guys can grow up to six inches per year. That means your Shovelnose catfish will have reached its full potential in the short time of five years.

Unless you have a 250-gallon fish tank just lying around the house, it’s safe to say you’ll have to upgrade your existing tank to a bigger one once these fish are fully grown. This is primarily the reason why most people tend to return these fish at the three or four-year mark – because they don’t have the room to accommodate a big enough tank.

I know we’ve almost been harping on about the size of the Tiger Shovelnose Catfish, and you’re about to find out why.

Tiger Shovelnose Catfish can grow up to two to four feet (36 to 48 inches). That may not sound like much, but it’s approximately the distance from your nose to the knuckle of your index finger – while your arm is outstretched. That’s huge for a freshwater species.

Before you freak out, you should know that it’s rare for a Shovelnose catfish to reach four feet in captivity. Most big boys and gals in aquariums will achieve 36 inches at most. Though, that’s no pitiful number either.

If you’re looking for a fish species that has some mileage to offer, you really shouldn’t look further than the Tiger shovelnose. In the wild, this species can live for a little more than two decades (20 to 23 years).

However, since captivity can’t recreate the exact natural conditions the species are used to – their lifespan doesn’t extend beyond 18 to 20 years in a tank.

How to Care for Tiger Shovelnose Catfish?

All aquatic species have their own care requirements in captivity, and the Tiger Shovelnose isn’t much different. The species require particular essentials in terms of housing, water quality, diet, and health problems. Here’s what their overall care and maintenance routine looks like.

One of the most accessible aspects of Tiger shovelnose care is diet because these fishes aren’t problematic at chow time. We’ve already mentioned that Tiger shovelfish are a nocturnal hunter in the wild, but they’re also piscivorous – meaning their diet consists mainly of meat from other fish species. However, they’re also known to eat crustaceans, like shrimps or crabs, because they’re also opportunistic feeders.

All of the above means that fish parents won’t have difficulty getting their Tiger catfish to accept most types of aquarium feed. This includes live and frozen feed, along with items like worms, pellets, and fresh fish slices.

But be advised that although this species will eat anything you put in front of it, it’s never a bright idea to overfeed the Tiger catfish.

Overfeeding will only lead to increased elimination, which will lead to poor water quality. You’ll end up needing to change the water much faster than is generally required.

We’re kicking off our care section for the Tiger catfish with tank requirements because, let’s face it, with fish that grow as big as this species, it’s not something you can overlook easily.

In their native waters, the Tiger catfish can reach lengths of four feet (48 inches) upon maturity – making them pretty sizable. In short, the Tiger Shovelnose Catfish is a big predatory hunter that shouldn’t be taken too lightly because of its affiliation with catfish.

Remember, inadequate housing can lead to stress in fish, which can shorten their lifespan to quite an extent.

Aside from that, you’ll also need to have a robust filtration system in place to keep their watery environment clean. After all, the golden rule of fishkeeping is – a big fish equals a big mess.

Finally, when creating the right feel in the tank (in terms of habitat), you can rely on driftwood, rocks, and floating aquatic plants like Hornwort. Try opting for gravel as the substrate because it keeps the buildup of bacteria to a minimum by allowing the water to run through it.

Also, a little heads up – the Tiger shovelnose may get a teensy bit aggressive if their tank’s left entirely bare.

So, in essence, you have to build a space that’s big and open enough to allow these fish to move freely, while at the same time, it should have enough decorations to make them feel at home. 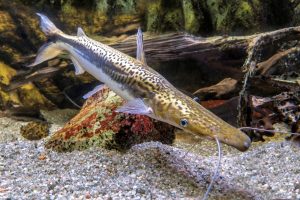 Since the Tiger Shovelnose Catfish hails from the more temperate parts of the world, it’s pretty flexible in terms of water temperature. For example, the species will tolerate temperatures ranging from 75 to 81 F quite well.

The water pH levels for the Tiger catfish clock in at 6.0 to 8.0, and the carbonate hardness levels should stay between 6 to 20KH.

Besides this, it’s good to keep changing the water at regular intervals to ensure the pH and KH levels remain within the parameters they’re supposed to. Large tanks need at least 20 percent of the water changed weekly.

Too much ammonia, nitrate, or bacteria in the water can lead to health problems and the development of stress – all of which directly impact the lifespan of aquatic animals.

Since the tank you’ll need to house the Tiger Shovelnose won’t be something dainty, it’s best to keep a water testing kit on hand to help you keep track of the water’s suitability.

As with all types of fish, always keep temperament in mind when you’re trying to select tank mates for Shovelnose catfish. Tiger catfish are pretty large, and they’re also active swimmers, which means they can inadvertently injure other smaller species by zipping around the tank.

Then it would be best if you also considered that this species isn’t above gobbling up smaller fishes when hunger strikes. All of this means that any tank mates for Tiger catfish need to be pretty sizable themselves and not fainthearted.

– Illnesses and Other Health Problems

We’re sure fellow fish-enthusiasts will be happy to hear that the Tiger catfish aren’t prone to any exceptional or uncommon diseases. But that doesn’t mean you’re off scot-free in terms of care.

A part of the catfish family, the Tiger shovelnose is still susceptible to conditions like hole-in-the-head and ich – both of which are primarily related to poor water quality and unfit hygiene standards.

So, if anything, this species’ health care and immunity are linked directly to the basic rules of fish care – which revolve around adequate water requirements and ideal hygiene conditions.

Overlooking either of these things can lead to stress and create the perfect environment for harmful bacteria to thrive in. 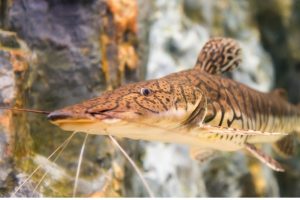 The Tiger Shovelnose Catfish has more aliases than a spy. It’s scientifically referred to as Pseudoplatystoma Fasciatum, but its more common names include Tiger catfish and Tiger shovelnose.

The species hails from the Pseudoplatystoma genus (covering South American catfish), and in the wild, you’re likely to find them in the main currents of rivers. Occasionally though, the tiger catfish can also be found in flooded forests and lakes.

As is generally the case with scientific names, the Tiger Shovelnose Catfish bears the nickname ‘fasciatum’ due to its body’s banded pattern (stripes). While the species’ coloring isn’t what you’d call vivid, their long and flat mouths (hence the term ‘shovelnose’) give them an exciting appearance.

Another distinguishing feature of the Tiger shovelnose is the barbels they have protruding from underneath their mouths. These antenna-like structures allow the fish to navigate their way through muddy waters and help them locate their prey.

Temperament-wise, the Tiger shovelnose are solitary creatures and nocturnal hunters. This species doesn’t have 20/20 eyesight, thanks to the murky waters they inhabit, and they rely on their barbels mainly to swim and catch prey.

That means, most of the time, these fish will keep to themselves. However, that doesn’t mean Tiger catfish stay stuck to the bottom of a tank. They’re active deepwater swimmers, which means you’ll see them flitting around the mid and bottom-level of the tank.

They are also known to show aggression at times. They’re known to grow to great lengths, even in captivity – meaning they require plenty of room to move about.

If the tank you use to house them in is congested with all kinds of decoration and overcrowded with other species – Tiger catfish may resort to showing hostility. Additionally, their predatory nature might spell trouble for their smaller tank mates if the Tiger catfish feels a little cagey.

It’s best to keep this species in a long and wide tank that gives them the space they need and stick to tank mates that are large enough and aggressive enough to defend themselves.

With the kind of dimensions a Tiger Shovelnose Catfish has, we wouldn’t recommend trying to breed them at all. However, for our more curious readers, who’d like to know more about the process – there’s plenty of ambiguity where breeding Tiger catfish is concerned.

There’s not much known about the breeding habits of this species in the wild, which presents a definite problem.

Then, there’s the fact that experts who’ve tried breeding Tiger catfish haven’t had the easiest time of it because the species will generally only successfully procreate in a pond – but there still aren’t any guarantees.

More than anything, there are two severe challenges to breeding this species – that most hobbyists can’t overcome.

One, and remember Tiger catfish are housed in pretty big fish tanks, is that you’ll need something even more significant when trying to get these fish to breed. That’s why experts had to resort to ponds.

Secondly, the distinct lack of knowledge about Tiger catfish breeding habits in the wild makes it almost impossible to try and recreate the same settings in captivity.

In other words, it’s a hit-and-miss type of project and one that can harm your fish. That’s why breeding Tiger shovelnose is best left to nature.

Tiger catfish are pretty fast-growing, and their size requires fishkeepers to resort to fish tanks no less than 180 or 250 gallons – depending on their age.

Besides that, the species have specific care essentials, which are highlighted below: 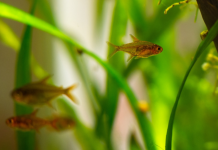 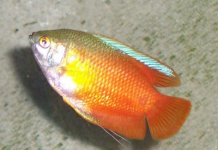 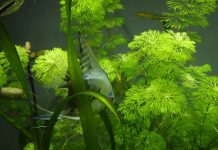 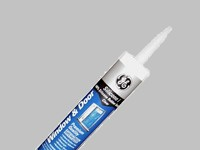