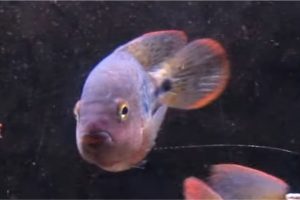 They are found in the waterways of the Grijalva River Basin of Mexico as well as Guatemala. Some of them are also found on the Atlantic slope.

These freshwater fish usually inhabit the lower to middle river valleys and lakes where water moves slowly. They are found over rocks, silt, sand, or mud, often hiding amidst root tangles. Taylor and Miller first described the Vieja hartwegi 1980.

An interesting thing about these fish is that they are a polymorphic species. As in, based on the morphological data, they have been found to exist in two forms. The first is the typical morph of a moderately deep, somewhat elongated body shape with a mid-lateral band.

The other form of Tailbar Cichlid is the rheophilic form discovered quite recently in the upper reaches of the Grijalva River basin in Mexico. In this form, they have an elongated and slightly deep body shape and no presence of a mid-lateral band.

In the wild, male Tailbar cichlids and female Tailbar cichlids both grow close to 12 inches, around 30 centimeters. However, males can grow up to 14 inches in size, so you will usually find them larger than females. Given their estimated size, you can imagine why you need a reasonably big tank.

The male Tailbars have a more robust build and end up developing a comparatively denser sprangling of red throughout than the females. This is how you can differentiate them aside from the sizes. Moreover, males also display a brighter coloration than females and develop a nuchal hump.

Your Vieja hartwegi can live up to eight years, which is fairly long compared to most other fish. If you take proper care of them, they will grow quite big and stout during this time. In fact, with extensive care, a tail bar cichlid can even live longer than that, approximately 10 years at max, though it’s pretty rare.

On the other hand, if you fail to take proper care of them, their lifespan will shorten due to bad health. These fish can fall victim to freshwater diseases and, if not treated in time, die. Moreover, since these cichlids are often aggressive towards each other, they can injure each other, leading to death.

How to Care For Vieja Hartwegi

It’s moderately challenging to take care of Tailbar Cichlids, as in you will have to do a bit more work than some other cichlid species. Since these guys produce wastes in high amounts, you will need excellent filtration. If you don’t have that, you will have to change the water frequently, almost every day.

It depends on how many cichlids you have in the tank. Moreover, you have to give them all the required food timely and in the right amount. The best thing is that with proper care and lots of changing of the water, your Tailbar cichlids will grow very quickly. They will also breed fast and in a healthy way. Moreover, their temperament will remain stable.

Another thing you should do for additional security is to get dither fish. Dither fish would also keep your cichlids from being jumpy or hide. Other than that, you won’t have to do much to care for your Tailbar cichlids. Just ensure to separate them during spawning season, so they don’t become threatening to the other fish.

Vieja hartwegi fish are omnivores, meaning you can feed them anything from plants to small fish and the more common cichlid food: shrimp. For the home aquarium, it’s recommended you give them a varied diet to help them grow quickly and brighten and maintain their coloration.

The staple diet of your Tailbar cichlids can be high-quality flakes, cichlid pellets, to something green. You can supplement this with spirulina flakes for best results. They will also need meaty foods, so don’t forget to give them prawns, mussels, and cockles once in a while. Benthic detritus are also part of their diets. 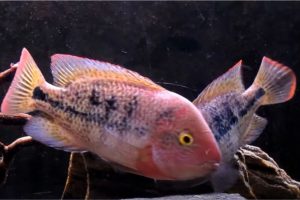 You will need a minimum of 55 gallons tank for growing out a group of young chop cichlids. However, if you’re getting a pair of adults, at least 65 gallons is needed.

In fact, if the tank is too small for the cichlid to move around and feel comfortable, they will become quite aggressive. The fish become more intolerant to other Vieja species, especially when the tank is not big enough to let all of them roam freely and comfortably.

Tailbar Cichlids are known to show mildly aggressive to peaceful behavior with fishes of other species when it comes to tank mates. However, the same can’t be said when it comes to fellow cichlids, with whom they are very aggressive. This aggression becomes much deeper when they are defending a spawning site.

This is why if you put more than one Tailbar Cichlid in a single tank, you should keep a divider ready if you think that a pair is ready to spawn. Otherwise, there is a strong possibility that you’ll see other fish lying around injured or dead inside the tank.

Moreover, adult Tailbar Cichlids might be fairly peaceful towards smaller cichlids in the tank. However, when these cichlids start to grow to the same size, they will begin to bother them. If you see that happening, you will have to rehome them as required.

You can keep swordtails, mollies, and Astyanax tetras as the tank mates for a more geographically correct grouping when it comes to other fish. Fortunately, Tailbar cichlids are adaptable with almost every fish. However, remember that the tank should be spacious enough if you’re putting other fish in it alongside the Tailbar.

Like most other cichlids, Tailbar Cichlids will reproduce by spawning. To ensure the breeding takes place properly, you will have to maintain a temperature of about 76 to 78 F inside the tank, with a pH ranging from 7.5 to 7.8 in moderate to hard water.

Moreover, you should provide hiding spaces within the tank for your cichlids to breed. It will help minimize the brunt of the abuse that a dominant male Tailbar cichlid can and most likely will exert on tank mates during the spawning period. If there is no hiding space, then it’s best to segregate them for the safety of your fish.

So how will the breeding take place? It’s the same as most other cichlids. First, they will dig a pit in the substrate to get ready for spawning. The male cichlid will start to become more aggressive towards the female during the courting process. If the female rejects the male and refuses to spawn, then the aggression can become very serious, to the point of abuse.

So you should keep a watch on them. If you notice the aggression crossing boundaries and becoming dangerous to the female, then separate her for a while and try again. The aggression will not entirely go away on the male’s part, but it will become slightly less serious.

The number of broods can range from 100 to as many as 1,000 eggs under stable water conditions. Once the eggs have been laid, the female’s work is done, and the male will work on fertilizing it, and both of them will play active roles in protecting the eggs. The eggs will hatch typically within two to three days.

After a few days of hatching, you will see the fry free swimming around the place. At that time, you should feed them newly hatched brine shrimp, and they will accept it straight away. As they grow, they will also accept crushed flakes and micro worms for meals.

Now that we have completed a detailed discussion about Vieja hartwegi, it’s time to take a second look at the most important points you should keep in mind if you get one of your own. To sum it up:

Vieja hartwegi can be a great addition to your aquarium, as they look gorgeous with their dotted skins. As long as you keep their aggression under strict watch, you’ll be good to go. 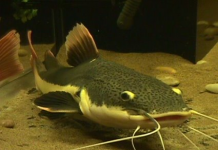 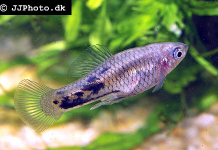 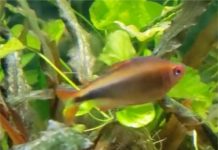