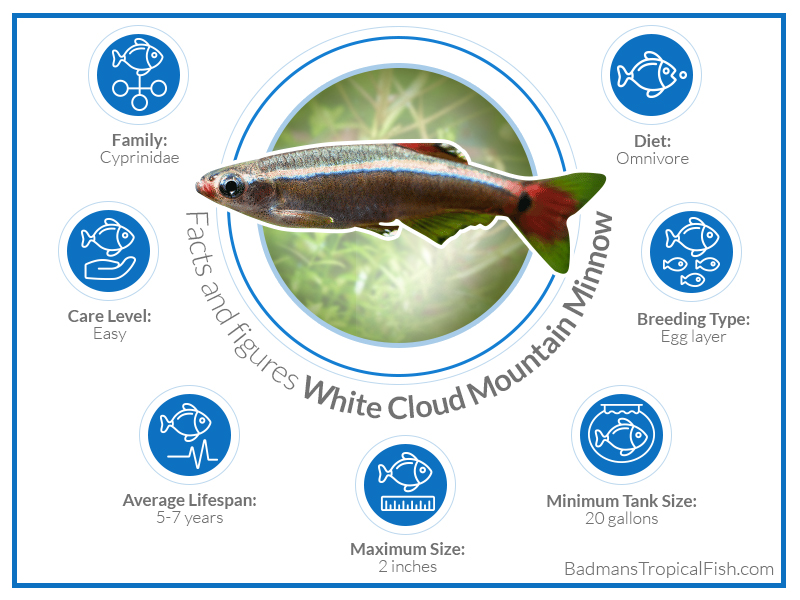 The white cloud minnow also known as tanichthys albonubes or white cloud mountain minnow is a great species for new fish keepers. They are attractive, easy to care for, and do not require a lot of equipment to maintain.

Due to overcollection and industrial pollution, the species is now almost extinct in its native range. The White Cloud Mountain Minnow is bred in fish farms worldwide and is readily available to aquarium keepers. What makes them so worthwhile is their colorful appearance and hardiness to a range of water conditions. 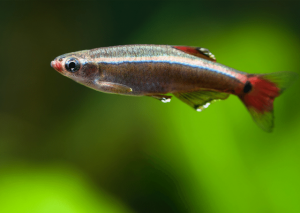 White Clouds fish are a schooling species and do best in groups of at least 5. Fish that are lonely or not doing well will lose their color.

In appearance, White Cloud Minnow are slender and reach up to 1.5 inches in length. The body shape is similar to the tetra but with a mouth that is turned up. Their overall body color ranges between silver and light bronze with bright red on their caudal fin and tail.

There is also often a black dot at the base of their tail. Their backs are darker, sometimes from bronze to blue. Their undersides tend to be light, almost white.

What makes them stand out is a line running the length of their bodies that can be an iridescent shade of blue to green. This gives them the same kind of appeal as tetras with a friendlier habitat to more hardy common species.

Through selective breeding, there are a few color variations to be found. Some are more golden with the typical red fin and tail coloration. Others have an overall red or rose tone with fully red fins.

Male and female White Cloud Minnow can be told apart by subtle differences in coloration and body shape. Females of the species tend to be more muted in color and have wedge-shaped fins. Their stomachs may also be round, especially when full of eggs. Males are noticeably more vivid in color and have longer fan-shaped fins. 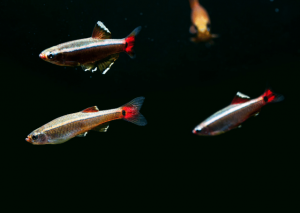 White Cloud Minnows are among the easiest freshwater species to care for. The White Cloud Mountain tank size can be as small as a two-gallon, single species desktop aquarium up to large habitats with multiple fish species. Several dozen can be kept in a standard 10-gallon aquarium.

Their needs are simple. Water temperature between 61° to 72°F (18 to 22°C) and water free from chlorine and other chemicals. Water kept closest to the lower or middle of the temperature range will keep your fish livelier and more colorful. To keep the water fresh, a good filtration system is necessary. An under-gravel filter will also help introduce some water movement into the aquarium, which is beneficial to White Cloud Minnows.

The native habitat of the White Cloud Minnow includes rocky, gravel bottoms, and vegetation. They live in the mid to upper levels of the aquarium but will explore the entire tank. A good base design uses aquarium gravel and bottom features such as driftwood, rocks, and structures.

Plants are an important part of a White Cloud Minnow habitat. It gives them places to explore, to hide in, and to lay their eggs. Depending on the size of your aquarium, you can have floating, rooted, or a mix of the two.

The plants you use in your aquarium do not have to be living. Artificial plants can add easy care, color, and variety to the habitat. Live plants are better if you want to mimic their natural environment and encourage breeding.

Here are a few living plants that make a great addition to your White Cloud Minnow aquarium:

No matter which plants you select for your aquarium, make sure that they can live in the White Cloud Minnow desired temperature range and that they will not grow so fast as to crowd out the tank.

Note that aquatic plants that need fertilizer should be avoided in general. The fertilizer can cause sudden changes in water chemistry that could sicken or be fatal to your fish.

White Cloud Minnows are generally peaceful and get along well with other similar sizes, non-aggressive fish.

The challenge is finding peaceful, small species that can tolerate the White Cloud Minnow need for cool water.

Here are some good tank mates that can cohabitate with the White Cloud Mountain Minnow:

White Cloud Minnows are an ideal species for aspiring fish breeders. Little needs to be done to encourage the species to procreate.

The two most important factors to their breeding are having male and female fish in the aquarium and having enough vegetation for them to use for egg placement. In a healthy aquarium, breeding will happen on its own and quite frequently. Keeping your White Cloud Minnows in a species tank will encourage breeding and also help safeguard fry from predation.

White Cloud Minnows go through courtship for several days before laying eggs. The males begin courtship by going through fin displays near female fish. Males may also chase females. He will try to entice a female into the vegetation to lay her eggs so that he can fertilize them.

The majority of the eggs will land in the vegetation. That is why thicker varieties such as Java Moss and Water Sprite are such good choices. White Cloud Minnow eggs hatch in approximately 48 to 60 hours. As soon as they are born, the fry are immediately self-sufficient and can be fed very finely powdered fish flakes.

The White Cloud Mountain minnow is a happy omnivore. It will readily eat flaked or pelletized tropical fish food. If you have live vegetation in the aquarium, they will nibble on the leaves.

To keep your White Cloud Minnows from turning off on a particular food, try occasionally alternating with these foods:

Because of their shy nature, they may not compete for food with mid or lower tank mates. Feeding two small meals a day is a good schedule that will also help them stay entertained.

Keep their diet varied, and you will continue to have happy and lively White Cloud Minnows.

White Cloud Minnows are hard to beat for simplicity, beauty, and enhancement of cool water fish displays. Add this rewarding species to your aquarium. 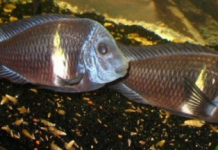 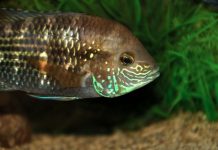 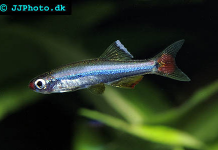 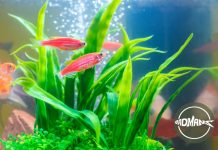 Vallisneria Americana: One of the Most Reliable Plants for Novices