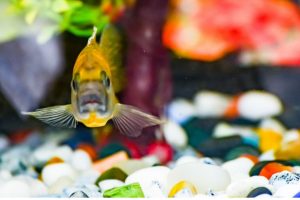 Yellow Jacket Cichlid, scientifically known as Parachromis friedrichsthalii, is a Central American species of cichlid. It has physical similarities with other members of the species, especially P. managuensis and P. motaguensis. Heckel first described this species of cichlid in 1840.

Yellow Jacket Cichlids are notorious for their unusual hunting technique that is rare among cichlids and fish in general. They are called ambush predators because they trick their targets first, catch them off-guard, and then ambush them. You might be wondering how they do it?. They do it by pretending to be dead.

That’s right. These fish lie motionless at the bottom and wait for the smaller fish to come and pick on them. As soon as they sense those small fish within a close radius, they jump up and grab them with their razor-sharp pseudocanine teeth. This unusual hunting mechanism has similarities with N. livingstonii of lake Malawi.

Yellow Jacket Cichlids are not a terrible rare breed. They are available in abundance in many Central American countries, including Mexico, Guatemala, Honduras, Costa Rica, Belize, and Nicaragua. You can also find them in other places, such as Australia, but they’re almost extinct there.

Central American cichlids are all usually found in brackish waters. They have a preference for sluggish waters that move slowly, with a clear to murky or muddy texture. These benthopelagic fish inhabit rivers, lakes, lagoons, lowland streams, and swamps.

You will find them in depths of about 3.3 to 5 feet. Generally, they don’t go below any more than 6.5 feet.

As the name suggests, yellow jacket cichlids are Xanthochromic. They have a striking yellow bodice that will look beautiful swimming inside your aquarium. The coloration of these fish varies for the male and female sexes.

The female yellow jacket cichlid will show a strong vertical set of barring against the bright yellow background. On the other hand, the males can range from copper to a brownish-yellow hue. They also exhibit dark spotting in the fins, chin, and flanks.

An adult male yellow jacket cichlid can grow up to as much as 30 centimeters or approximately 12 inches. The female adult is usually smaller in size. They range from 20 to 25 centimeters, which is a maximum of about 10 inches.

The growth rate of yellow jacket cichlids is moderately fast, but nothing particular. Typically, it’s faster for males than for females, but even among the same sex, the growth rate varies from fish to fish. Some fish grow very fast, while others grow very slow.

However, almost every yellow jacket cichlid will grow up to at least six inches in length. It is also to be noted that these guys have shown a faster growth rate in higher temperatures. However, they’ll also become more territorial and aggressive in high temperatures.

It is not much you have to do when it comes to caring for your yellow jacket cichlid. It’s not hard to take care of these fish. However, you do have to keep a good watch on them at all times as they tend to be quite aggressive. If there are other cichlids in the tank or much smaller fish, they might be injured or even killed by the yellow jacket cichlid.

However, the main headache you will have with a yellow jacket cichlid is the frequency of changing the tank water. Cichlids are very sensitive to accumulated waste materials in the water, so you have to make sure to change most of the water about two to three times a week, maybe, even more, depending on the condition.

If you’re keeping your cichlid in freshwater, they will become prone to different types of freshwater diseases. These can include Hexamita, ich or white spot, gill flukes, tuberculosis, and such. It’s important that you identify such diseases in their early stages so that you can start the treatment soon.

The diet of a yellow jacket cichlid is not much different from other fish. If you don’t know already, they’re all carnivores. If you get one of your own, you have to make sure to give it a lot of high-quality vegetable-based pellet foods. You can find them easily in just about any shop that sells fish or a pet food shop.

Other foods that yellow jacket cichlids need in high amounts are earthworms and hunks of seafood. Aside from these, you can supplement them with certain green foods like algae wafers. In fact, you can also give them peas, cucumber, sushi nori, and such foods. They’ll gladly gobble them up.

They’re also piscivorous, so you can also give them small fish, insects, and shrimp to eat. As for the fry, you can feed them baby brine shrimp, micro worms, or commercial fry food.

As mentioned before, these cichlids’ original habitat is in brackish waters. So, of course, they will do well in a brackish water system. If you put them in an aquarium with brackish water, the marine salt mix will automatically adjust the pH and hardness level to the required amount.

However, it’s not mandatory to keep them in a brackish water tank. These fish will do just fine in a freshwater aquarium. However, you will have to do some extra work with adjusting the pH and hardness. You can choose any water system you prefer. Now, what about the size of the tank?

Suppose you have a yellow jacket cichlid of the same size as an average adult of the species. In that case, you should keep your yellow cichlid in a tank that can hold at least 55 gallons of water.

However, they will love a 75 gallons tank better. It will give them more space to move around, as they tend to be quite active. Especially if you’re keeping other fish in the tank, too, that much space is very necessary.

Let’s move on to tank decors now. Like most other fish owners, you’ll probably want to keep live plants at the bottom of your fish tank to make it look prettier. However, that might not be the best idea if you’re getting a cichlid fish, especially the big cichlids, who tend towards not being at peace with plants.

They are most likely to shred, uproot, or even consume the live plants you keep in your tank. However, some fish owners have claimed that yellow jackets are more tolerant of plants than other Central American cichlids and won’t harm them. To confirm, it’s best if you test them out first and see how your one reacts to plants.

Another thing you have to make sure of is the lighting of the tank. It should not be too bright and overpowering. This condition is because, just like most New World cichlids, yellow jackets like to live in the darker parts of their habitats. 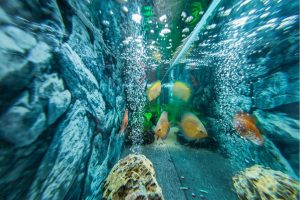 These cichlids, much like all other cichlids, have an unusually aggressive temperament. They possess sharp teeth that are capable of doing severe damage. So if you keep other cichlids in the tank, there is a huge chance they will fight and harm each other. In some cases, one might even kill the other.

Sure, you can keep them in mated pairs in the same tank. You can also keep other yellow jackets of less aggressive temperament. However, it’s still not recommended. The best way to raise a yellow jacket cichlid is to keep only one cichlid per tank. If you don’t have any other tanks at home but have a mated pair, then you can consider putting them in the same one.

Now that fellow cichlids are out of the way, what about other fish? Well, yellow jacket cichlids will be less aggressive towards fishes of different species, but that doesn’t mean they will be entirely peaceful either. If the other fish are peaceful, too, then a safe community will hopefully form.

Like all other cichlids, yellow jacket cichlids are open substrate spawners. They breed quite easily, following the guidelines of typical Central American breeding. When in the wild, breeding naturally occurs from April to August. A well-conditioned pair of cichlids can spawn every three to five weeks.

If you want your cichlids to breed, the best method is to purchase six to 10 juveniles and let them develop their own mating pairs. Usually, they start forming pair bonds when they’re 3.1-4 inches in length. However, since the male can become very aggressive and abusive if the female refuses to breed, it’s recommended to use a dither fish.

Here is how the whole thing works. The male will display the courting behavior to the female. If the female responds to it, they will together start to clean a flat surface. Afterward, the female will lay about 500 to 1000 eggs that are orange in color. The male will start to fertilize these eggs.

Both the parents will remain on high alert mode the whole time to guard the eggs. The eggs will hatch typically within three days, giving birth to little cichlids called fry. Initially, the parents will move the fry between different pre-dug pits. But they will start swimming on their own after six to seven days.

One thing about fries is that they grow at different rates, meaning two fries of the same age can be different in size. Since cannibalism is quite common among little cichlids, there is a risk of the smaller fry being eaten by the larger one. That’s why depending on the size, you should segregate them.

You can raise the fry separately if that’s more convenient for you. However, this increases the risk of an interruption in the breeding cycle. As a result, the male will want to spawn again with the female before she is ready. This issue can lead to the male hurting or even killing the female while attempting to force her to spawn.

Now that we have completed the detailed discussion of Yellow Jacket Cichlid fish, it’s time for a short summarization of the whole thing. Let’s go through some of the most important points once again.

Yellow Jacket cichlids might not be the friendliest fish out there, but they will surely be quite a beautiful addition to your aquarium. It will be like having cute bumblebees floating all around! 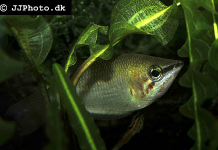 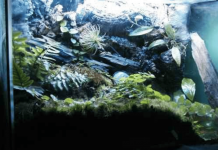 Vivarium Setup: Constructing Artificial Homes for All Forms Of Life

Articles on all aspects of tropical fish keeping and care. 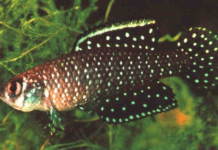